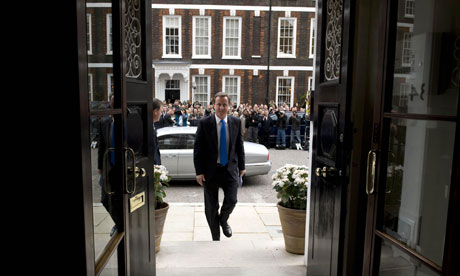 If David Cameron, leader of England’s Conservative party, is able to form a government, he would become the twenty-sixth British Prime Minister educated at Oxford. (Photo: Jeremy Selwyn/PA)

Corrections appended, May 11, 2010: In certain places, this article read “M.B.A.” where it should have read “a masters degree”, “M.P.A.” and “M.P.P.”, respectively. The text has been revised to correct the error.

The preeminence of Harvard and Oxford in the education of their own political leaders is generally well known.  Less appreciated is the role of these two institutions in the training of leaders from other countries.  From 1945 through early 2010, 71 heads of state and government from 41 countries have attended, or earned degrees, or held a variety of special scholarships and fellowships at Harvard or Oxford. 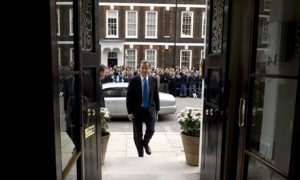 If David Cameron, leader of England’s Conservative party, is able to form a government, he would become the twenty-sixth British Prime Minister educated at Oxford. (Photo: Jeremy Selwyn/PA)

Two chief executives attended both Harvard and Oxford. Incumbent Columbian President Alvaro Uribe received a Certificate of Special Studies from Harvard and later was a Senior Associate Member of St. Anthony’s College at Oxford.  Twice Prime Minister of Pakistan, the late Benazir Bhutto earned a B.A. from Harvard and spent four years at Oxford, where she was President of the Oxford Union.

Oxford’s 45 students represent 25 countries, 14 of which are members of the Commonwealth. Pakistan is the leading source of students, with six. The 28 former Harvard students are relatively more diverse in that they came from two dozen countries, a third of which are in Latin America. Three Mexican Presidents are the most Harvard alums from any single country.

Executives who attended Harvard experienced a different type of education than those at Oxford.  Almost 80 percent of the Harvard students enrolled in post-baccalaureate programs, but fewer than half the Oxonians pursued that level of study.  Almost twice as many Harvard students (64 percent) earned advanced degrees as did Oxford graduates (36 percent).

Harvard’s Kennedy School of Government played a particularly important role in the education of foreign leaders.  11 of the 28 Harvard alums earned a masters degree from that entity.  Most of the advanced Harvard degrees (61 percent) were awarded by that school.  By contrast, Oxford students enrolled in half of the university’s 44 colleges and halls, with none of them predominating.

All but one political leader attended Harvard or Oxford before becoming head of state or government.  The exception was Frederick Sumaye, Prime Minister of Tanzania, who earned an M.P.A. at Harvard’s Kennedy School of Government after he left office.

Three sets of Oxford alumni served simultaneously for part of their tenure. In the mid-1960s, Indian Prime Minister Indira Gandhi and President Sarvepalli Radhakrishnan held office at the same time.  Ghanaians John Kufuor and Kofi Busia, President and Prime minister respectively, served together in the early 1970s.  President Penaia Ganilau and Prime Minister Kamisese Mara of Fiji were both in office from late 1987 through mid 1993. Mara succeeded Ganilau as President.

A majority of the figures in this report were Presidents and Prime Ministers, but seven monarchs, all of whom attended Oxford, are included.  The Kings of Jordan, Norway, and Tonga are currently on their thrones.  Harald V of Norway succeeded his father, and fellow Oxonian, Olav V.

Three Oxford educated Malaysian monarchs served during this period but they do not appear to be related.  Malaysia functions under an “elected” monarchy in which one of the hereditary rulers of the Malay states is selected as the Yang di-Pertuan Agong or “King” for a five year term.

Monarchs are not the only executives who are related. Thai Prime Ministers Seni and Kukrit Pramoj were brothers and Oxford graduates.  Zulfiqar Bhutto is the father of fellow Pakistani Prime Minister Benazir Bhutto; both attended Oxford, and Benazir also earned a Harvard degree. The Greek Papandreou family is represented by the late Prime Minister Andreas, the father of incumbent chief executive George. Andreas earned a Ph.D from Harvard and taught there for two years.  George attended that institution as an undergraduate and later returned as a Fellow at the Weatherford Center for International Affairs.

Top national political leaders from Harvard and Oxford were not just a mid-20th century phenomenon.  They are a 21st century reality.  40 percent of those included in this report held office sometime in the last decade. A majority of those with a Harvard connection and nearly a third of the Oxonians have served since 2000.  As of this writing, about a third of the former Harvard students and almost a fifth of Oxford group are in office.

Graduates of these two institutions will continue to occupy the top offices in their countries for some time to come.  The Crown Princes of Japan and Bhutan are alumni of Oxford’s Merton College and St. Peter’s College, respectively.

The scions of three Asian political dynasties are in position to climb further up the political ladder. Bilawal Zardari Bhutto, the son and grandson of respective Oxford-educated Bhutto Prime Ministers, is a student at Oxford and the Chairman of the Pakistani People’s Party. Rahul Gandhi, of India’s Nehru-Gandhi dynasty, attended Harvard and sits in the Indian parliament.  The Marcos political family of the Philippines has yet to produce a Harvard or Oxford President, but Ferdinand Marcos, Jr. (Oxford A. B.) is a former Governor, current member of the House of Representatives, and candidate for the Senate.

Two Rhodes Scholars could become a president or a prime minister. Incumbent Louisiana Governor Bobby Jindal seems poised to step onto the national political stage.  He could join Bill Clinton as the second President to have attended Oxford. Tony Abbott is the Leader of the Opposition in the lower house of the Australian Parliament. If his party wins the next election, he would become prime minister.