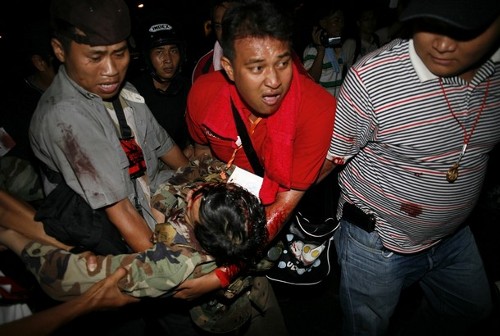 What? A Thai military officer, supporting the opposition movement against his military leadership orders, gets shot in the head in Bangkok during a protest.

Where? The shooting took place in the Silom business district of Bangkok, Thailand.

When? The incident happened somewhere around midnight (local time) when the suspended general was giving an interview to the media.

Why? The Thai government has condemned the actions of the pro-opposition movement which is bent upon undermining the authority of military-backed Prime Minister Abhisit Vejjajiva by protests and sit ins. The suspended general is accused of involvement in dozens of grenade attacks that have wounded hundreds of people.

How? Unconfirmed reports say military snipers were mobilized in the vicinity. A military spokesman Col Sansern Kaewkumnerd, had earlier warned that sharpshooters armed with live ammunition would move into position in the area.