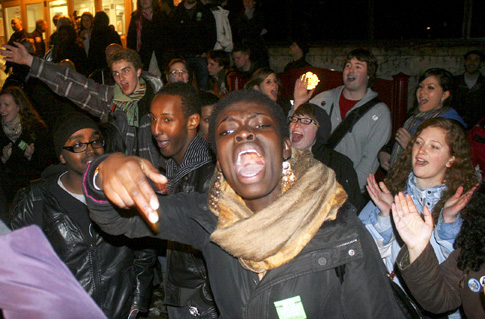 An event at the University of Ottawa in Canada headlining the vitriolic American right-wing pundit Ann Coulter on Tuesday was cancelled by organizers due to boisterous demonstrations outside the venue. A day earlier, Coulter freely spewed her venom against gays, feminists and Muslims at the University of Western Ontario. Yet to conservative activist and lawyer Ezra Levant, who is on the advisory board of the International Free Press Society which sponsored the event in Ottawa, Tuesday’s incident showed the “shortcomings in Canadian free speech.” 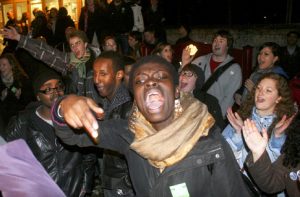 Canadians taking to the streets in protest of what many consider to be hate speech is not an affront to Canadian free speech. Its “shortcomings” were not exposed by an unruly crowd but by the actions of the Canadian government, which has banned or otherwise impeded the visits of personalities expressing views diametrically opposed to its own regarding the Middle East.

Ann Coulter, who called for Islamic countries to be invaded and for Muslims to be converted to Christianity after 9/11, has made a career out of bashing Muslims and other minority groups. She was allowed to enter Canada without trouble. Perhaps Canadian Prime Minister Stephen Harper’s views on the Middle East are closer to hers than to, say, George Galloway’s or Amy Goodman’s. Let’s not forget that when the Liberal government kept Canada out of the invasion of Iraq, the current Conservative Prime Minister wrote a letter to the Wall Street Journal bemoaning the fact that Canada would not partake in the bloodletting.

A little over a year ago, George Galloway, a British Member of Parliament and an outspoken critic of the invasion of Iraq, was deemed inadmissible to Canada on security grounds. The office of Canada’s immigration minister, Jason Kenney, claimed Galloway had provided financial assistance to Hamas, the Palestinian Islamist group, referring to a humanitarian convoy he had headed to the Gaza Strip. He was meant to speak at the public forum “Resisting War from Gaza to Kandahar” hosted by the Toronto Coalition to Stop the War. The government’s decision came after the Jewish Defense League of Canada asked it to do “everything possible to keep this hater away.” Ironic considering that in 2001 the Federal Bureau of Investigation deemed the Jewish Defense League to be a right-wing terrorist group.

Then, later that year, it was American progressive journalist Amy Goodman’s turn to get acquainted with Conservative Canada. Goodman, a critic of the American wars in Afghanistan and Iraq, and of Israeli policies in the Palestinian territories, was traveling to Vancouver to speak at a benefit for community radio stations at the Vancouver Public Library. She was detained by the authorities and questioned about the content of her planned speech. Interrogators were particularly keen to know whether she would be speaking about the Vancouver Olympics.

Only last week, a speaking tour featuring Dr. Mustafa Barghouti, a Palestinian peace activist and nominee for the Nobel Peace Prize who advocates non-violence, had to be cancelled because of delays in issuing him a visa. He had been expected to meet with Canadian political opposition MPs. In the past, Barghouti obtained a visa in a question of days, yet, this time, he still had not been approved nearly two weeks after having applied. It is unclear what was behind the delay. Certainly he poses no security threat. Last year he was allowed to enter the Unites States and appeared on Jon Stewart’s “The Daily Show.”

In 2007, Medea Benjamin, co-founder of the women’s anti-war group Code Pink, and Ann Wright, a retired U.S. army colonel and U.S. State Department official who resigned in protest of the 2003 invasion of Iraq, were detained for several hours by Canadian authorities at the border. They were told they would not be allowed to enter the country despite having the support of some MPs, because of past arrests in the U.S. for peaceful protests against the war in Iraq.

So while some conservative activists and pundits in Canada shed crocodile tears for free speech because a hate monger who was permitted to enter Canada was not welcomed at the University of Ottawa with open arms, Canadians should be aware of the real threat to free speech. It comes not from a student protest one night in Ottawa.