Americans Are Hell-Bent on Tyranny 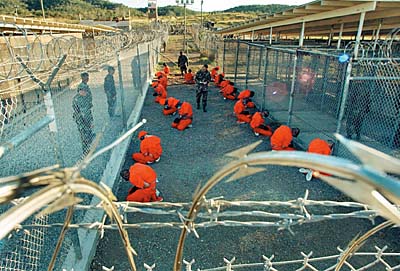 Obama’s dwindling band of true believers has taken heart that their man has finally delivered on one of his many promises–the closing of the Guantanamo prison.  But the prison is not being closed.  It is being moved to Illinois, if the Republicans permit.

In truth, Obama has handed his supporters another defeat.  Closing Guantanamo meant ceasing to hold people in violation of our legal principles of habeas corpus and due process and ceasing to torture them in violation of US and international laws. 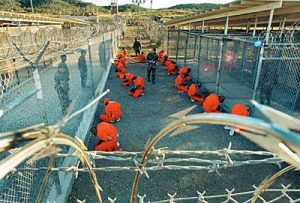 All Obama would be doing would be moving 100 people, against whom the US government is unable to bring a case, from the prison in Guantanamo to a prison in Thomson, Illinois.

Are the residents of Thomson despondent that the US government has chosen their town as the site on which to continue its blatant violation of US legal principles?  No, the residents are happy.  It means jobs.

The hapless prisoners had a better chance of obtaining release from Guantanamo.  Now the prisoners are up against two US senators, a US representative, a mayor, and a state governor who have a vested interest in the prisoners’ permanent detention in order to protect the new prison jobs in the hamlet devastated by unemployment.

Neither the public nor the media have ever shown any interest in how the detainees came to be incarcerated.  Most of the detainees were unprotected people who were captured by Afghan war lords and sold to the Americans as “terrorists” in order to collect a proffered bounty.  It was enough for the public and the media that the Defense Secretary at the time, Donald Rumsfeld, declared the Guantanamo detainees to be the “780 most dangerous people on earth.”

The vast majority have been released after years of abuse.  The 100 who are slated to be removed to Illinois have apparently been so badly abused that the US government is afraid to release them because of the testimony the prisoners could give to human rights organizations and foreign media about their mistreatment.

Our British allies are showing more moral conscience than Americans are able to muster.  Former PM Tony Blair, who provided cover for President Bush’s illegal invasion of Iraq, is being damned for his crimes by UK officialdom testifying before the Chilcot Inquiry.

The London Times on December 14 summed up the case against Blair in a headline: “Intoxicated by Power, Blair Tricked Us Into War.”  Two days later the British First Post declared: “War Crime Case Against Tony Blair Now Rock-solid.” In an unguarded moment Blair let it slip that he favored a conspiracy for war regardless of the validity of the excuse [weapons of mass destruction] used to justify the invasion.

The movement to bring Blair to trial as a war criminal is gathering steam.  Writing in the First Post Neil Clark reported: “There is widespread contempt for a man [Blair] who has made millions [his reward from the Bush regime] while Iraqis die in their hundreds of thousands due to the havoc unleashed by the illegal invasion, and who, with breathtaking arrogance, seems to regard himself as above the rules of international law.”  Clark notes that the West’s practice of shipping Serbian and African leaders off to the War Crimes Tribunal, while exempting itself, is wearing thin.

In the US, of course, there is no such attempt to hold to account Bush, Cheney, Condi Rice, Rumsfeld, Wolfowitz, and the large number of war criminals that comprised the Bush Regime.  Indeed, Obama, whom Republicans love to hate, has gone out of his way to protect the Bush cohort from being held accountable.

Here in Great Moral America we only hold accountable celebrities and politicians for their sexual indiscretions.  Tiger Woods is paying a bigger price for his girlfriends than Bush or Cheney will ever pay for the deaths and ruined lives of millions of people.  The consulting company, Accenture Plc, which based its marketing program on Tiger Woods, has removed Woods from its Web site.  Gillette announced that the company is dropping Woods from its print and broadcast ads.  AT&T says it is re-evaluating the company’s relationship with Woods.

Apparently, Americans regard sexual infidelity as far more serious than invading countries on the basis of false charges and deception, invasions that have caused the deaths and displacement of millions of innocent people.  Remember, the House impeached President Clinton not for his war crimes in Serbia, but for lying about his affair with Monica Lewinsky.

Americans are more upset by Tiger Woods’ sexual affairs than they are by the Bush and Obama administrations’ destruction of US civil liberty.  Americans don’t seem to mind that “their” government for the last 8 years has resorted to the detention practices of 1,000 years ago–simply grab a person and throw him into a dungeon forever without bringing charges and obtaining a conviction.

According to polls, Americans support torture, a violation of both US and international law, and Americans don’t mind that their government violates the Foreign Intelligence Surveillance Act and spies on them without obtaining warrants from a court. Apparently, the brave citizens of the “sole remaining superpower” are so afraid of terrorists that they are content to give up liberty for safety, an impossible feat.

With stunning insouciance, Americans have given up the rule of law that protected their liberty.  The silence of law schools and bar associations indicates that the age of liberty has passed.  In short, the American people support tyranny.  And that’s where they are headed.