Activists and Holocaust Survivor to March in Gaza, Egypt Says No to March 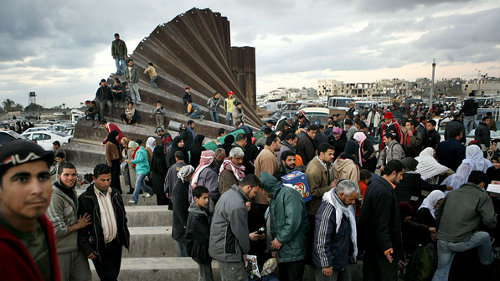 Gazans tore down a section of wall on the border with Egypt after Israel's murderous assault on the civilian population of Gaza in January, 2008. Israel continues to hold Gaza under siege. (Kevin Frayer/AP)

Hedy Epstein survived the Holocaust but her family did not. To this day she does not know exactly how many of her relatives perished.

“I have never counted, I can’t bring myself to do that,” she said.

Epstein went to Germany after the war searching for family members and to help sift through Nazi archives to build the cases against Nazi war criminals.

Now she is getting ready to travel to Gaza to march with thousands of Palestinians against Israel’s siege.

“I’m determined to go to Gaza,” said Epstein. “It’s important to let the people of Gaza, who are terribly, terribly isolated, know that there are some people out there who know about what is happening and who care, and who support them in this dreadful, dreadful life they have to lead.”

Hundreds of international activists will attempt to enter the Gaza Strip via Egypt to take part in the Gaza Freedom March, later this month. As it is envisaged, the march, scheduled to take place on Dec. 31, would be a massive non-violent protest in a region known for its history of violence. But Egypt recently warned that the delegation would not be allowed to enter Gaza, citing alleged escalating tensions on the border.

The Gaza Freedom March, organized under the aegis of the anti-war group Code Pink, is a part of a larger peaceful protest movement for Palestinian rights. Participants hope their methods will attract the world’s attention to the Palestinian struggle for independence.

The march has been organized in only six months, with a single employee and hundreds of volunteers.

“It’s one of those things where you can either have nightmares about it every night about ‘how are we going to do this?’ or just have a we-will-pull-it-off attitude, and I’m trying to have the latter,” said Medea Benjamin, an organizer and co-founder of Code Pink. “It really is quite huge, with so many intricate obstacles that one could never have imagined that range from dealing with finicky governments to finicky individuals.”

It has been a monumental undertaking to plan out the logistics to transport over 1,000 participants from around the world to the beleaguered coastal strip and lodge them there. Organizers had met with Egyptian authorities and given them, at their request, the details of each registered marcher. Benjamin said the authorities had been lukewarm to the idea. However, they appear to have suddenly changed their position.

Egypt’s Foreign Ministry recently told organizers that it would keep the Rafah crossing closed due to alleged escalating tensions on the border. Organizers have urged supporters to call the Egyptian embassies and consulates to demand the marchers be let through. Organizers said that previous delegations had not received an O.K. prior to their departure but had gone to Gaza anyway. Foreign participants are planning on going ahead with their travels.

The Palestinians in Gaza have been busy organizing on their side of the wall as well, preparing for the march and the foreign visitors which it is expected to bring.

The march is the brainchild of controversial scholar and activist Norman Finkelstein, author of Beyond Chutzpah and The Holocaust Industry, though he has since resigned from the march’s steering committee due to irreconcilable differences.

“Ghandi was of the opinion that non-violence was much more courageous than violence,” Finkelstein said. “The bulk of the march by far will be Palestinian, we would be there to act as human shields, more or less what happened in the American South during what was called Freedom Summer, where privileged northern students came down and risked their lives, knowing that if a black person were killed no one would give a darn, but if a privileged student from Harvard or Yale gets killed, the press, the country, would pay attention.”

Notable amongst the potential human shields are retired U.S. Army colonel and former U.S. diplomat Ann Wright and Pulitzer prize-winning author Alice Walker. But Benjamin said she had contacted the Israelis through various channels with the message not to shoot.

Gaza has been completely sealed off since Israel’s devastating 22-day war, launched on Dec. 27, 2008. Over 1,300 people were killed including hundreds of women and children.

The much needed reconstruction materials have not been allowed in and Israel continues to be in effective control of the strip—Israel controls Gaza’s airspace, coastline, borders, imports, exports, water, fuel and electricity.

Even aid ships attempting to reach Gaza have been intercepted by Israel’s navy, and their crews have been detained.

“I still plan on sailing to Gaza, maybe this spring,” said Epstein, the Holocaust survivor. “It’s almost a year since this destruction took place and nothing has changed. Israelis don’t even allow textbooks to come in. At one point they did not allow pasta to come in. What’s so dangerous about pasta?”

Egypt has been keeping its border crossing with Gaza mostly closed at the behest of Israel and the United States, and has even begun constructing a massive iron wall bellow the ground to stop smuggling tunnels that act as a lifeline to Palestinians. Israel says the tunnels are used to smuggle weapons.

Ultimately, the international march might not take place at all if the Egyptians prevent Epstein and her comrades from crossing the Sinai into Gaza. If this is the case, they may be left stranded on the border or in Cairo while the Palestinians are forced to march alone, without the protection of “privileged” humans to act as shields.