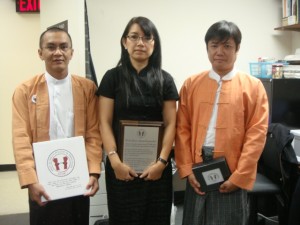 There are growing fears for the health of Kyaw Zaw Lwin, a Burmese-born American democracy activist on hunger strike since December 4.

The concerns for his plight coincide with a letter from the U.S. Congress addressed to the leader of Burma’s military regime, Senior-General Than Shwe “urging in the strongest possible terms” for Zaw Lwin’s immediate unconditional release to fly back to the United States.

The letter, signed by a delegation of 53 members of the House of Representatives says that Kyaw Zaw Lwin’s imprisonment is a breach of Burmese and international law. The letters warns the Burmese military regime that “the detention of an American citizen raise serious doubts about your government’s willingness to improve relations with the United States.”

It comes more than one week after Senator Jim Webb, who successfully lobbied for John William Yettaw’s release on an unofficial visit to Burma in August, released a statement on December 11 calling for the Burmese regime to allow regular U.S. consular visits and “guarantee [Kyaw Zaw Lwin] full rights under international law.”

The case is a major test of the Obama administration’s policy of direct engagement with Burma’s military regime.

Kyaw Zaw Lwin is accused by the military of falsifying Burmese identification documents, entering the country illegally with an undisclosed amount of Burmese currency (Kyat) and failed to declare all U.S. dollars in his possession.

If convicted, he faces a maximum prison term of 17 years.

U.S. consular officials last with him on December 3, the day before he commenced his protest actions. U.S. His last family visit occurred four days later.

Kyaw Zaw Lwin was arrested by Burmese authorities on September 3, 2009 after landing in Rangoon. He was due to visit his ailing mother, who is currently in prison for participating in demonstrations against Burma’s military in 2007. Two of Zaw Lwin’s cousins are also incarcerated.

Documents obtained from the Thailand-based human rights organization Associated Affiliation for Political Prisoners (AAPP) show that he was taken to undisclosed location and experienced frequent beatings at the hands of officials. He was also deprived of food, sleep and medical assistance, and refused U.S. consular access for 17 days.

Burmese authorities officially admitted arresting him on September 22. Two days later, the nation’s state-run newspaper, the New Light of Myanmar, said that Kyaw Zaw Lwin had been detained on terrorism charges for supplying financial assistance, explosives, a satellite phone and computer explosives. The newspaper also said that Zaw Lwin was “conspiring with anti-government forces and bogus monks” to “plot riots and sabotage” within and outside of Burma. No accusations of fraud or falsifying documents were mentioned in the article.

The AAPP have described the charges as “unfounded”, declaring that Kyaw Zaw Lwin had no known links to any terrorist organizations. The charges have since been dropped.

A participant in the 1988 national uprising against Burma’s military junta, Kyaw Zaw Lwin arrived in the United States as a political refugee in 1993. His hunger strike is to highlight the poor treatment of Burma’s political prisoners, which officially number more than 2100.

On December 10, Kyaw Zaw Lwin’s U.S.-based fiancée, Wa Wa Kyaw, revealed her distress in an opinion-editorial to Thailand’s The Nation. She said that U.S. Embassy staff had informed her that Kyaw Zaw Lwin had been subjected to frequent physical assaults and deprived of food, sleep and medical aid.

She said that the courts were stacked in favor of the military. “There is little doubt that he will be convicted. The only question is what will happen next4,” she said.

“I must speak for Nyi Nyi, as he so often spoken for others. Nyi Nyi’s arrest has been condemned by the United States and the international community,” Wa Wa Kyaw wrote in The Nation. “And so I say: your show you take this issue seriously. But what will you do?”

The Congressional bipartisan letter is not the first diplomatic effort to publicly highlight Kyaw Zaw Lwin’s detention. WYPR radio’s Bruce Wallace reported that on November 10, Maryland Senator Barbara Mikulski sent a letter to Secretary of State Hillary Clinton, urging her to “condemn Mr. Lwin’s detention in the strongest terms possible.” It is unclear whether the Assistant Secretary of State, Kurt Campbell discussed Kyaw Zaw Lwin’s case with officials during his visit to Burma in November, the highest ranking delegate to visit the country since 1995.

Burma is not a signatory to the International Bill of Human Rights and the Protection Against Torture, Ill-Treatment and Disappearance.