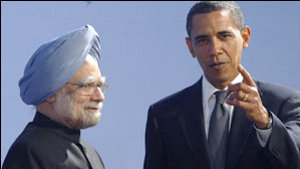 Though a de-hyphenation of sorts has occurred over the decade between India and Pakistan, this has been caused in part by changed US attitude to India in light of its growing power and growing proximity of the US to India. This has culminated this week in the Indian prime minister becoming the first state guest of the Obama presidency. With Obama promising to make a call soon on General Stanley McChrystal’s report on the counter insurgency requirements in Af-Pak, Obama no doubt used the opportunity to probe India’s position. McChrystal had made mention of this rivalry between the two regional protagonist states impacting adversely in Afghanistan. The rivalry is starkly in evidence in mutual allegations of violence by proxy, be it the bombing of the Indian embassy in Kabul in October  or ‘revelations’ of Indian military aid to the Pakistani Taliban being rolled back by the Pakistani Army in Operation Rah e Nijat.

India is loath to give up the gains made in the developmental effort it has put in there and support to its partners of the erstwhile Northern Alliance that had displaced the Taliban. More pertinently, thinking in the balance of power perspective, it is unwilling to permit greater political space to Pakistan by accommodation of the Taliban, seen as proxy of Pakistan, in any manner. India’s position on Af-Pak is determined by its overall Pakistan policy.

Relations with Pakistan have been on ‘pause’ over the year since Mumbai 26/11. India’s Prime Minister, Dr. Manmohan Singh, while in Washington D.C., has let on that India has no credible interlocutors in Pakistan. It is unable to interface with the civilian regime since the Army there control the India and security policy. It cannot interact with the Army as that would further undermine democracy. Besides, Pakistan has not obliged with any degree of alacrity in following up on the dossiers of evidence on 26/11 provided by India in prosecuting the seven suspects on Pakistani custody. It has not acted against Hafeez Sayeed, leader of the Lashkar e Tayyaba. Besides, India’s Army Chief maintains that Pakistan has not only not rolled back terror infrastructure, but that there are 2000 terrorists waiting to infiltrate from Pakistan Occupied Kashmir. Thus, it is likely that India would continue the pressure mounted through its ‘no talks’ stance and containment efforts in Afghanistan. It has denied charges that it is offering support to insurgents in Baluchistan.

Indications of any change in India’s position would be soon be visible in the meeting between the Indian and Pakistani prime ministers on the sidelines of the CHOGM meeting in Trinidad on Dr. Manmohan Singh’s way back. From his meeting with Obama, he is likely aware of the general direction of Obama’s forthcoming decision with respect to Af-Pak region. Since the latest news is that the US is already in parlays with the Taliban through the aegis of Pakistan’s ISI and the Saudi General Intelligence Department, it is likely that a political prong will complement military developments. Therefore, India would be formulating its position accordingly, particularly how it would reconcile with an increased political space this entails for Pakistan.

In internal Indian politics, the government is in a position of strength. This would enable it to reach out to Pakistan in case it so decides without having to look over its shoulder for a critique from right wing parties. It had earlier had to step back from the seeming concessions made to Pakistan in the Sharm es Sheikh joint statement on the meeting between the two prime ministers. In that an interpretation had it that it had delinked progress on terrorism from continuation of talks and allowed mention of India’s alleged role in Baluchistan conceding Pakistan an advantage. Presently, the turmoil in the leading opposition party, the BJP, not only continuing, but it has also been placed on the back foot by release of the long awaited Liberhan Commission report on the demolition of the Babri Mosque in 1992. The report indicts its senior leadership for acts of omission that enabled the demolition, which in turn led up to vitiation of the communal situation since. Secondly, the government has opened up a line yet again to the separatist Hurriyet in Kashmir in following up on promises made in the prime minister’s visit to the state in October. Thirdly, the ruling Congress swept the three provinces that went to polls recently, indicating disunity in the ranks of the opposition at both ends of the political spectrum, left and right. Lastly, needing US goodwill equally, India would not want to appear a spoiler in the Obama’s forthcoming Af-Pak plan. Thus, there is scope for optimism on resumption in talks.

The problems that held up resumption of talks however remain. The Pakistan Army is unlikely to permit any perception that it has succumbed to India pressure. By acting against insurgents over the year, both in Swat earlier and presently in Waziristan, it has managed to maintain its centrality in the war against terror. Passage of the Kerry-Lugar bill is evidence of its continuing relevance.  It would attempt to cash in on this by prevailing on the US to accommodate its strategic concerns. In the main, this involves having a regime in Kabul that would not dispute the Durand line in the future. Maximally, a changed circumstance to its north would permit it ‘strategic depth’ with respect to its principal rival, India.  Minimally, it requires cessation in the anti-Pakistan activity it accuses India of conducting, using its presence in Afghanistan. However, its desire that the US weigh in on its side on Kashmir is unlikely to materialize since nothing would alienate India more.

The US has to walk the thin line between its two ‘strategic partners’. A possible way out is maintaining a studiedly hands off position on Kashmir, permitting India to continue its policy of quasi-compliance, even while ensuring that this does not degenerate into a military confrontation, albeit at the lower end of the escalatory ladder, in the event  of another 26/11. Compensating Pakistan, it could permit it a greater role in stabilising Af-Pak in a political accommodation with a Taliban moderated through engagement. Given the consultation and deliberation that has preceded the decision, the hope is that Obama’s decision would result in hitting the ‘resume’ button in New Delhi on the stalled peace process.