A Paradigm Shift in Singapore: Yet Apec Offers No Clear Answers 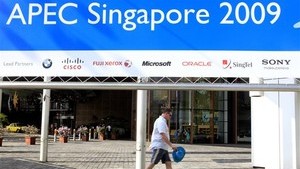 Like scores of journalists, I attentively listened as Singapore Prime Minister Lee Hsien Loong delivering his closing remarks, and for the last time answering journalists’ questions. It was the conclusion of 17th Apec Economies Leaders’ Meeting in Singapore, on November 15, and Prime Minister Lee was clearly tired, although unruffled.

Mr. Lee is an impressive man. He has a commanding presence and is very articulate, despite his soft poise and humble demeanor. He speaks with the confidence of a leader of a great nation, not an island city-state, the smallest nation in Southeast Asia. In fact, Lee’s confidence is well earned, and greatly deserved, and, by any reasonable standards Singapore is indeed a great nation. His country, once a site of a small fishing village, which saw a most tumultuous history of hardship, occupation and war, is now a prosperous nation, economically notwithstanding; its GDP per capita makes it the fifth wealthiest country in the world. Singapore’s official reserve is estimated at more than US $170 billion. For a country of 4-5 million people, it isn’t too bad.

In some ways, Singapore is the world’s most efficiently managed company. Every facet of society contributes to the prowess of the corporate machinery that never takes a break. Its people are the employees in a hierarchy that has little room or patience for favoritism or corruption. But, despite the callous and, at times dehumanizing nature of business, the nation is immensely proud, its people are most helpful, self-assertive, resourceful, expressive and confident.

That explains Mr. Lee’s coolness as well. From his opening remarks at the Apec Summit to his last comments, he showed a particularly different breed of leadership. His was neither the reactionary nor the submissive language that is associated with leaderships in countries that are regarded as “small”, thus not so consequential.

Hosting an event of such magnitude as one that brings together presidents, prime ministers, foreign, finance and trade ministers of 21 countries – representing more than 40 percent of total world population, nearly 55 percent of its total GDP and about 44 percent of world trade – should be a bit intimidating, daunting even. But not for Singapore, as everything fell into place, in such an impeccable and seemingly effortless manner. The Apec Summit, including its ministerial meetings, adjoining CEO summit, and the Apec leaders’ meetings, in addition to a consignment of other significant events on the side, all progressed with very few problems. Life in Singapore, outside the immediate grounds of the summit venues, carried on as usual.

I had prepared several questions to ask Mr. Lee. My first pertained to the APEC leaders’ faltering on their commitment to the environment, ahead of the Copenhagen summit on climate change.

In their initial draft, according to the Dow Jones Newswires, the leaders had committed to a specific agenda. That, however, abruptly changed. “Global emissions will need…to be reduced to 50 per cent below 1990 levels by 2050,” the draft read. The final statement however, reneged on that promise, delving instead to good sounding, yet hollow avowals: “Global action to reduce greenhouse gas emissions will need to be accompanied by measures, including financial assistance and technology transfer to developing economies for their adaptation to the adverse impact of climate change.”

It was strange how such summits tend to resort to specifics when such issues as tariffs, protectionism, investment, trade, currencies, and so on are referenced. But when human development, the environment and other subjects that have no formidable champions to back them up are mentioned, then its all about clichés and truisms.

Luckily, or unfortunately for me, other journalists had similar concerns. Here goes my first question.

Then I wished to ask about free trade: how can the less powerful members of Apec survive a free trade agreement with giant economies, which demand everyone but themselves, to drop tariffs and abandon protectionism?

Currently Apec member economies, as they wish to be called, don’t have a binding free trade agreement, but a de-facto one, since most Apec members are bound by various regional and bi-lateral agreements. But US President Barack Obama is now leading a campaign to cap the Asia-Pacific Economic Cooperation forum with one single agreement. It’s, more or less, an attempt at recapturing the lost markets of Asia, where China has in recent years emerged as a powerful, albeit affable partner.

President Obama spent eight days on his first trip to Asia touring Japan, then Singapore – where he attended the Apec Summit – then China and finally South Korea. His visit was a watershed moment in this history between the US and Asia, the former being more modest, the latter more assertive. “Equality”, as in “more equal” relationship, whether in trade or politics, was the buzzword that accompanied Obama throughout his trip, especially in Japan and China. In Singapore, Obama was a star, not exactly because of the country he represents, but because of him as an individual who promised earthshaking changes. The fact that he is yet to deliver on any of his promises seemed unimportant.

But even a bigger star, was Chinese President Hu Jintao, not because of him as an individual, but because of the great country he represents.

What a strange turn of fortunes.

Thousands in Singapore, a country with a Chinese majority, many of whom are the descendants of poor immigrants from South China, came out to meet President Hu. Many tears were shed as he spoke, with force, command but also benevolence.

Singapore’s Apec 2009 was the forum where the new balances of power were at full display: China was making its move to the front of the line and the US, hesitantly but willingly was making room, accepting the unavoidable ordains of power. What could follow is either a natural economic, thus political transition and repositioning, or a new cold war, in which other Asia-Pacific countries – and others – are likely to be embroiled; for how can countries, such as Chile, Mexico, Brunei Darussalam, Peru and even Singapore itself, for example, benefit from such gatherings without being trampled in the long run by the march forward or hasty retreat of the economic giants? That was the last question I wished to ask Mr. Lee. The questions and answers period however, was cut short despite the palpable agitation of many journalists.

The Apec Summit, although answering a few questions, certainly delineated the new paradigm shift. It was a chance for Asia to assert itself, and for others to listen. But it also presented a new set of priorities, an agenda even, one in which the environment didn’t seem to top the list. A most unfortunate conclusion, indeed.