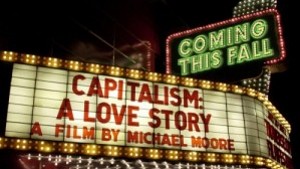 Michael Moore is back. The self-styled guerilla documentary maker has declared war on capitalism, branding it “inherently evil” and seeks to discredit everything and everyone within sight who has profited from a system.

Taking his traveling circus on the road, Michael Moore reminds us how for decades, ordinary people were promised a piece of heaven on earth if they worked hard and do everything that the powers that be told them to. For years everything went smoothly, until big business got a hold of the agenda, tore it up and said, “We want an open checkbook and a license to write the rules that suit us.”

Presenting images where the American public is clever through times of prosperity, war, unemployment and every other disaster in between, Michael Moore’s aim is to track down and return the $700 billion lost during the 2008 financial meltdown. He blames the corporate greed and their pals in Washington, D.C. who let it happen over the years, and armed with his camera crew, he wants immediate answers, even though the likelihood of getting them is pretty slim.

Throughout the course of the documentary, we are introduced to people who have lost their homes, jobs, life savings, and loved ones.  Moore has a knack of taking complex issues and then rephrasing them into everyday English, albeit with an obvious bias. For Moore, catching the culprits unaware is his strength, part of the relentless quest to get answers on behalf of the American people.  The one problem with this approach is that he cannot seem to gel the issues together, giving the impression that in Capitalism, he has bitten off more than he can chew.

The film is not without its moments. Witness Moore’s grilling of a Wall Street employee who requires several attempts to explain what a derivative is. Moore ends up defining it as a bet made in an insane casino (his description of the New York Stock Exchange). His introduction of other terms such as dead peasant insurance, the term used by banks when cashing in a life insurance policy taken out on a recently deceased individual, and condo vultures, real estate agents who profit from selling apartments well below value, after they have been vacated by people who could not afford the mortgage payments. His inclusion of President Franklin Roosevelt’s radio speech to the people and funeral procession, along with the accompanying narration, shows that when he wants to, Moore can add a dignified touch in demonstrating how democracy and capitalism should go hand in hand.

As expected, Michael Moore’s documentary follows its usual template of pulling off an outlandish stunt, something which takes the focus off the seriousness of the issue. It’s a case of here we go again. His “financial coup d’etat”, where Moore appears outside the headquarters of Goldman Sachs armed with a megaphone, sacks of money bags and a promise to return the $700 billion, is capable of being pulled off by college pranksters. Hilarious viewing it may be, but at what price? Even a police officer protecting the headquarters of Goldman Sachs seems genuinely embarrassed when Michael Moore tries to barge past in an attempt to make a citizen’s arrest of a CEO.  This slapstick journalism is almost an indictment of the serious issue he is attempting to address.

Michael Moore touches on the right issues, but cannot seem to deliver the knockout blow. This film will most appeal to the political left, and he will probably not lose any admirers over it. If anything, his popularity may even surge because of his tenacity to keep getting under the skin of those who hate him. But even though his reputation as a renegade film maker will still be intact regardless of the success or failure of Capitalism: A Love Story at the box office, at two hours, it lacks the impact that is so desperately required for something of this magnitude.