U.S. Economy: Are You Ready for the Next Crisis? 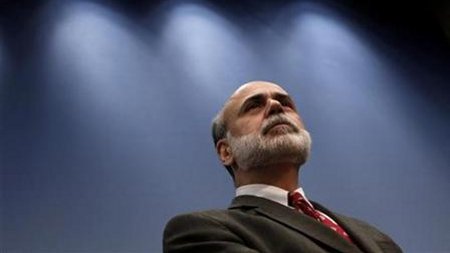 Chairman Ben Bernanke of the privately owned Federal Reserve at the Brookings Institute in Washington on September 15, 2009 (Jim Young/Reuters)

Chairman Ben Bernanke of the privately owned Federal Reserve at the Brookings Institute in Washington on September 15, 2009 (Jim Young/Reuters)

Evidence that the US is a failed state is piling up faster than I can record it.

One conclusive hallmark of a failed state is that the crooks are inside the government, using government to protect and to advance their private interests.

Another conclusive hallmark is rising income inequality as the insiders manipulate economic policy for their enrichment at the expense of everyone else.

On October 21, 2009, Business Week reported that a new report from the United Nations Development Program concluded that the US ranked third among states with the worst income inequality.  As number one and number two, Hong Kong and Singapore, are both essentially city states, not countries, the US actually has the shame of being the country with the most inequality in the distribution of income.

The stark increase in US income inequality in the 21st century coincides with the offshoring of US jobs, which enriched executives with “performance bonuses” while impoverishing the middle class, and with the rapid rise of unregulated OTC derivatives, which enriched Wall Street and the financial sector at the expense of everyone else.

Millions of Americans have lost their homes and half of their retirement savings while being loaded up with government debt to bail out the banksters who created the derivative crisis.

After the worst crisis in US financial history struck, just as Brooksley Born said it would, a disgraced Alan Greenspan was summoned out of retirement to explain to Congress his unequivocal assurances that no regulation of derivatives was necessary.  Greenspan had even told Congress that regulation of derivatives would be harmful.  A pathetic Greenspan had to admit that the free market ideology on which he had relied turned out to have a flaw.

Greenspan may have bet our country on his free market ideology, but does anyone believe that Rubin and Summers were doing anything other than protecting the enormous fraud-based profits that derivatives were bringing Wall Street?  As Brooksley Born stressed, OTC derivatives are a “dark market.” There is no transparency. Regulators have no information on them and neither do purchasers.

Even after Long Term Capital Management blew up in 1998 and had to be bailed out, Greenspan, Rubin, and Summers stuck to their guns. Greenspan, Rubin and Summers, and a roped-in gullible Arthur Levitt who now regrets that he was the banksters’ dupe, succeeded in manipulating a totally ignorant Congress into blocking the CFTC from doing its mandated job. Brooksley Born, prevented by the public’s elected representatives from protecting the public, resigned.  Wall Street money simply shoved facts and honest regulators aside, guaranteeing government inaction and the financial crisis that hit in 2008 and continues to plague our economy today.

The financial insiders running the Treasury, White House, and Federal Reserve shifted to taxpayers the cost of the catastrophe that they had created.  When the crisis hit, Henry Paulson, appointed by President Bush as Rubin’s replacement as the Goldman Sachs representative running the US Treasury, hyped fear to obtain from “our” representatives in Congress with no questions asked hundreds of billions of taxpayers’ dollars (TARP money)  to bail out Goldman Sachs and the other malefactors of unregulated derivatives.

When Goldman Sachs recently announced that it was paying massive six and seven figure bonuses to every employee, public outrage erupted.  In defense of banksters, saved with the public’s money, paying themselves bonuses in excess of most people’s life-time earnings, Lord Griffiths, Vice Chairman of Goldman Sachs International, said that the public must learn to “tolerate the inequality as a way to achieve greater prosperity for all.”

In other words, “Let them eat cake.”

According to the UN report cited above, Great Britain has the 7th most unequal income distribution in the world. After the Goldman Sachs bonuses, the British will move up in distinction, perhaps rivaling Israel for the fourth spot in the hierarchy.

Despite the total insanity of unregulated derivatives, the high level of public anger, and Greenspan’s confession to Congress, still nothing has been done to regulate derivatives.  One of Rubin’s Assistant Treasury Secretaries, Gary Gensler, has replaced Brooksley Born as head of the CFTC.  Larry Summers is the head of President Obama’s National Economic Council.  Former Federal Reserve official Timothy Geithner, a Paulson protege, runs the Obama Treasury.  A Goldman Sachs vice president, Adam Storch, has been appointed the chief operating officer of the Securities and Exchange Commission. The Banksters are still in charge.

Is there another country in which in full public view so few so blatantly use government for the enrichment of private interests, with a coterie of “free market” economists available to justify plunder on the grounds that “the market knows best”?  A narco-state is bad enough.  The US surpasses this horror with its financo-state.

As Brooksley Born says, if nothing is done “it’ll happen again.”

But nothing can be done.  The crooks have the government.

* Note:  The OECD report shows that despite the Reagan tax rate reduction, the rate of increase in US income inequality declined during the Reagan years.  During the mid-1990s the Gini coefficient (the measure of income inequality) actually fell.  Beginning in 2000 with the New Economy (essentially financial fraud and offshoring of US jobs), the Gini coefficient shot up sharply.