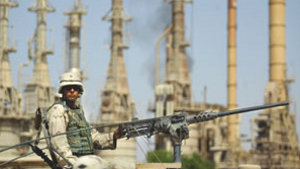 A U.S. soldier on patrol at an Iraqi oil refinery in 2003 (Reuters/Khaleej Times)

With a general election in Iraq scheduled for January 2010, the U.S. is encouraging the Iraqi legislature to pass the requisite election law, while international oil corporations continue to compete for contracts to exploit Iraq’s natural energy resources.

After a meeting at the White House on Tuesday with Iraqi Prime Minister Nouri al-Maliki, Obama said, “We are very interested, both of us, in making sure that Iraq has an election law that is completed on time so that elections can take place on time in January.”

A U.S. soldier on patrol at an Iraqi oil refinery in 2003 (Reuters/Khaleej Times)

The draft law is being held up over question of “whether ballot papers in next year’s election will show candidates’ names or only party titles”, according to Agence France Presse, as well as the question of how to organize voting in Kirkuk province, the Los Angeles Times reported.

Maliki said, “Our relations today have moved along and are not only confined to security cooperation, but today have moved to economic development, to providing prosperity for the Iraqi people.” He added, “This is important to move Iraq forward and to promote investments.”

His remark follows a two-day US-Iraq Business and Investment Conference, an effort to facilitate contracts between U.S. and Iraqi companies that fell under Secretary of State Hillary Clinton’s purview.

Iraq hopes to boost its oil production, which has averaged at 2.4 million barrels a day this year, a similar average from last year.

Another draft law has been the source of dispute, this one concerning the governing of contracts for oil exports from the autonomous Kurdish north of Iraq.

In June, China National Petroleum and the U.K.’s BP secured deals to exploit Iraq’s prized Rumaila oilfield, a $15 billion contract that was approved by the Iraqi Cabinet last Friday, with finalization of the deal expected shortly.

In a two-day meeting concluded on Monday, Iraq briefed international oil corporations on an upcoming second round of bidding for oil and gas contracts. Companies qualified by the Iraqi oil ministry to participate in the bidding include Britain’s Total and BP, Royal Dutch Shell, and the U.S.’s Chevron and Exxon Mobil corporations.