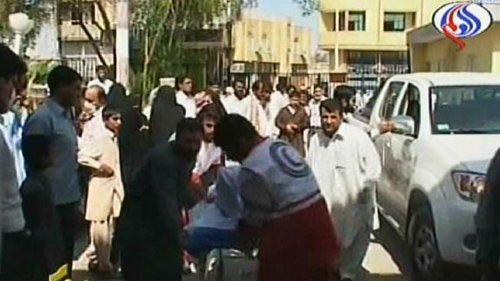 Iranian officials have accused the U.S. and British governments of involvement in a terrorist attack on Sunday that killed or injured dozens. Five commanders of Iran’s Islamic Revolutionary Guards Corps (IRGC) were included among the dead in the suicide bombing, responsibility for which was claimed by the Baluchi terrorist group Jundallah (Soldiers of God).

IRGC commander in chief Mohammed Ali Jafari said, “Behind this scene are the American and British intelligence apparatus, and there will have to be retaliatory measures to punish them.” He also claimed that Iran had documents proving U.S. and British involvement, according to the New York Times. Iranian officials have said that the attack was launched from Pakistan, where Jundallah is based.

Speaker of the Parliament Ali Larijani said, “We consider the recent terrorist measure the outcome of the U.S. measures,” a reference to alleged U.S. financing and arming of Jundallah.

Investigative journalist Seymour M. Hersh, has said that the U.S. under the Bush administration had supported Jundallah and other groups considered terrorist organizations for clandestine activities against Iran. UPI reporter Richard Sale has said that “The Iranian accusations” of U.S. covert support for such groups “are true”. Former marine and U.N. weapons inspector Scott Ritter has similarly said that the U.S. has supported such groups. The goal of U.S. backing of such operations inside Iran would be to destabilize the country, according to Hersh.

Other mainstream sources have similarly reported on the U.S. backing for terrorist groups to serve as proxies to destabilize Iran. The London Telegraph reported in 2007 that the U.S. was funding “terror groups to sow chaos in Iran” and ABC News reported on presidential approval for a CIA “covert ‘black’ operation to destabilize the Iranian government” that included support for Jundallah.

The U.S.-financed Voice of America on April 1, 2007 featured an interview with Abdel Malek Rigi, the head of Jundallah. According to the New York Times Magazine, Rigi was “introduced as the leader of an armed national resistance group.”

U.S. officials have always denied the claims of support for Jundallah and other terrorist groups, and it is not known whether or not the reported policy has continued under the Obama administration.