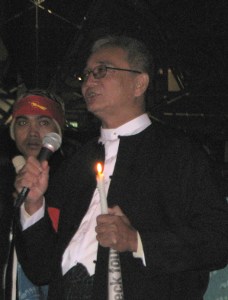 In Burma’s 1990 election, National League for Democracy (NLD) candidate U Hla Oo won 62 percent of the vote in his home division of Pegu to secure a parliamentary seat; a victory that the country’s military junta refused to honor.

The 58 year-old was dismissed from parliament and declared a fugitive. Eventually he would seek safety along the Thai-Burma border and serve as Minister for Labour for the National Coalition Government for the Union of Burma (NCGUB), a government-in-exile.

Nearly two decades later, he still has a thorough recollection of events leading up to the election.

“Back in 1990, there were two groups of people: Burmese nationals who were not interested in politics, and the more educated who were more interested and active in politics,” U Hla Oo says. He wanted to remove apathy and encourage everyone to take an interest in politics.

“Everyone [in the NLD] was pretty confident of winning. I spent four months travelling around Pegu Division, meeting people and asking them what issues mattered most.”

As each day passed, U Hla Oo continued to deliver the party’s motto: the NLD would deliver a democratic and accountable government accessible to all people. He met with farmers in remote villages, listening to their concerns and guaranteeing to make regular trips to consult with local villagers if elected.

“I trawled through mud-infested forests and deep rivers. Leeches clung to my skin. An opposition candidate for the National Unity Party did not bother showing up,” he says.

Like his fellow party candidates, U Hla Oo was not paid for his campaigning. However, he claims that candidates representing the military received 25 Burmese Kyats per day, with their campaign leaders received over five times this amount. The regime, he says, treated campaigning like a business.

Confirmation of victory came courtesy of townspeople who informed him of the result.

“My first reaction was ‘I’m in trouble’, because of the extra responsibilities associated with being elected to parliament,” U Hla Oo confesses.

Although the NLD won more than 80 per cent of all seats in parliament, the military refused to stand aside, leading to an emergency meeting amongst opposition politicians.

As the military secretly named their choices of senators, the NLD’s elected campaigns and party members met in Ghandi Hall with victorious independent MPs. Delegates debated the possibility of opening parliament in defiance of the junta’s orders. However, rumors circulated that the building was wired with explosives, and that the military would detonate bombs if any attempt to resume parliament was made.

According to U Hla Oo, the NLD party’s spokesman, U Kyi Maung, made the decision to back down for the sake of avoiding bloodshed. Aung San Suu Kyi, he says, was under house arrest and removed from the process. To this day, it has never been established whether Ghandi Hall had been wired with explosives.

In December 1990, the Burmese diaspora established a government-in-exile, a role U Hla Oo says that he was actively involved with, organizing members to form a cabinet. This move led to increased surveillance and a raid by military intelligence officers.

“They came over to my house and threatened my wife with reprisals if I did not hand myself over for questioning. Military intelligence knew about my role in recruiting people,” he says.

Within a month of being questioned and released, U Hla Oo decided that he needed to get out, leaving Pegu for Manerplaw in Karen State, but declines to say what route he used. He lived under the protection of the Karen National Liberation Army (KNLA). Shortly before the Burmese military junta overran the Karen’s insurgent camp in Manerplaw in 1994, U Hla Oo fled to Thailand and has managed to avoid detection ever since.

While he is resilient and determined about his prospects of getting to serve the people of Burma again one day, he says that Senior General Than Shwe will stop at nothing to accomplish his personal goals.

“He has achieved his first mission because Aung San Suu Kyi is now silenced, but his ultimate goal is to take as many people to the grave as possible,” U Hla Oo says.

“As a leader, Aung San Suu Kyi would have a calming influence over Burma’s neighbours,” U Hla Oo continues. “She is highly respected and would have prevented Burma from sliding into further trouble.”

Analyzing the outcome of Suu Kyi’s trial, he states that the only other winner is U.S. Senator Jim Webb, because he freed John Yettaw, the man charged with breaking into Aung San Suu Kyi’s residence.

“It is sad that the public will never know the real causes and circumstances which led to the trial and subsequent jailing of Aung San Suu Kyi,” U Hla Oo adds.

The trial’s secrecy outlines the degree of lawlessness existing in Burma under the military regime.

“The junta makes up conditions as they go along whereas our party follows only General Aung San’s laws, which the military abandoned completely in 1988. If I ever return to the country and serve [in a freely elected civilian)] government, my first change would be to reinstall law and order.”

U Hla Oo continues to highlight human rights abuses and cases of environmental destruction. He is helping the NLD expose the regime’s ambitions to become a nuclear power, with assistance from the North Korean regime. In June 2009, the Irrawaddy published photos of a secret visit Burma’s General Shwe Mann meeting with North Korean officials in Pyongyang. Details of the visit were leaked to the Burmese population.

In April 2009, the Democratic Voice of Burma (DVB) reported that the regime ordered each state to plant 500,000 acres of castor oil as a counter to rising oil prices. A DVB article on April 21 2009 reported that villagers continued to have land confiscated by authorities without receiving confiscation, as part of the Burmese army’s expansion plans.

U Hla Oo hopes that one day, the NLD will experience the opportunity to serve as minister in a fully democratic government and fulfil the promises made in the run-up to the 1990 election. He is aware that his party faces tough times ahead without its charismatic leader, Aung San Suu Kyi. The military junta’s ongoing intimidation  towards the NLD does not deter him.

“I will not stay silent just because they hate me”, U Hla Oo says to me. He remains defiant that one day, he will address the people who voted for him nearly 20 years ago in the country’s last free and fair elections.