US Audacity of Hope Falters: Settlement Freeze No Longer Required 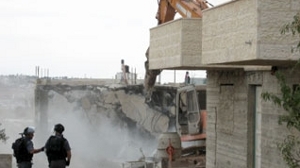 The US has decided to be ‘flexible’ regarding its once touted call for a total Israeli freeze on the expansion of its occupied territories’ settlements, all illegal under international law.

A senior official spoke to reporters on condition of anonymity on August 27. “It was more important that the scope of a settlement freeze was acceptable to the Israelis and the Palestinians than to the United States,” Reuters reported, citing the senior official. This means that peace negotiations can resume while Israeli bulldozers are carving up Palestinian land, demolishing homes and cutting down trees.

It also means that the Israeli rejection of the only US demand, which has thus far defined President Barack Obama’s relations to the Middle East conflict, has prevailed over the supposed American persistence. In other words, the US has officially succumbed to Israeli and pro-Israeli pressures, in Tel Aviv and Washington.

Those not familiar with the connotation of certain terminology in this conflict may not appreciate what it truly means that the US will no longer demand an Israeli halt of the ‘natural growth’ of its settlements, especially in the occupied Jerusalem area where tens of thousands of Palestinians are vulnerable to Israeli ethnic cleansing. Families like the Hanoun and Ghawi family have been evicted from their homes and thrown out on the street before sunrise. “The police came for them at dawn on a Sunday, heavily armed, wearing helmets and riot shields as they broke down the metal doors of the houses and dragged the two Palestinian families out onto the streets,” reported the Guardian on August 24.

The heart-wrenching episodes of innocent people being thrown into the street for no fault of their own, only for the need to make room for more Jewish inhabitants, took place before TV cameras and barely required more than a few words of bashful disapproval. That was in fact a political message, sent by Israeli Prime Minister Benjamin Netanyahu to the US administration and anyone else who dares to question US settlement policy. It took place when Obama’s call for settlement freeze was at its pinnacle. Now, just imagine how Israel will behave, now that the US’s lonely demand is officially retracted. The rightwing Israeli government will likely expedite its settlement program to preclude any future demands for freeze. Many more Hanouns and Ghawis, and their children, will find themselves on the pavement for simply not being Jews, even if they are the rightful owners of the land.

The Israeli logic, however, is uncompromisingly clear. Two weeks before the evictions took place, Netanyahu addressed his cabinet, saying that Jerusalem (including occupied East Jerusalem) is “the capital of the Jewish people and of the state of Israel” and that “our sovereignty over it cannot be challenged.” He continued, “We cannot accept the idea that Jews will not have the right to live and purchase in all parts of Jerusalem.”

Aside from her unusually ‘harsh’ statement that the evictions were “deeply regrettable”, US Secretary of State, Hillary Clinton had no answer to the Jerusalemite families pleading for their stolen homes. And now this, more American flexibility.

While Palestinians, and those who support and sympathize with their rightful struggle, are accustomed to Israel’s belligerent violations of international and humanitarian law, and direct and indirect US support of Israeli behavior, many had the ‘audacity’ to hope that things might change under the new US presidency. Obama’s speech in Cairo, despite its many flaws, was seen as a promising sign that the US will play a more conducive role in finding a just solution to the conflict and the ongoing tragedy of the Palestinians. It was thought that Obama was planning to start simple, by merely demanding a freeze of the settlement expansion. It’s anything but demanding full rights for Palestinians, or even allowing cement, food and medicine to starving Gaza, but it’s a start, nonetheless.

And as Palestinians, Israelis, the entire region and world media awaited the outcome of the Obama-Netanyahu battle of wills, Israel carried out all sorts of harms, that also went unnoticed.

Externally, Israel capitalized on the supposed US pressure, to place counter pressure on the US to impose dilapidating sanctions on Iran, provide a timeline for the end of diplomacy aimed at diffusing the hyped tension over Iran’s nuclear program, and more. That too was the message that Netanyahu carried with him to the meeting with US Middle East envoy George Mitchell in London, last week.

Still, Israel expected more, demanding – with the blessing of the US –  Arab normalization with Israel, in reciprocation for the never actualized willingness to temporarily halt the expansion of settlements. Mitchell was also of the opinion that “Arab states (should) offer some gestures toward normalization of ties with Israel,” according to Reuters.

Internally, things took a dramatic turn for the worse. It started with a bill in the Israeli Knesset (parliament) that would jail Arabs who would commemorate the Palestinian Nakba or Catastrophe of 1948, which saw the expulsion of nearly 800,000 Palestinians from their land. Then there was the new law that enforces the replacement of Arabic lettering on road signs referring to various locations with their Hebrew equivalent, even if these locations have been known by their Arabic names for millennia. These are neither the first nor the last of such fascist roles aimed at denying any trace of a Palestinian (Muslim or Christian) identity to co-exist along with the exclusively ‘Jewish character’ of Israel.

But that, and much more, was taking place as Palestinians and hopeful others held their breath, waiting for Obama to deliver, until the most recent expression of American flexibility. Now, Palestinians are left with one of two options: to continue to subscribe to the illusion that the US is capable, or even willing to rein in Israel’s transgression and exact justice and human rights on their behalf, or to cleanse their midst of self-seeking and corrupt leaders, unify their ranks and continue their struggle for an uncompromisingly free and independent Palestine.