A Final Chapter in the PanAm 103 Bombing Case? 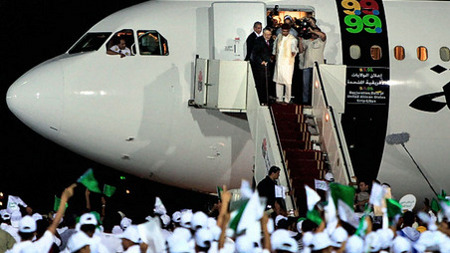 “And on the most exalted throne in the world sits nothing but a man’s arse.” — Montaigne

If there’s anyone out there who is not already thoroughly cynical about those on the board of directors of the planet, the latest chapter in the saga of the bombing of PanAm 103 over Lockerbie, Scotland might just be enough to push them over the edge.

Abdel Basset Ali al-Megrahi, the only person ever convicted for the December 21, 1988 bombing, was released from his Scottish imprisonment August 21 supposedly because of his terminal cancer and sent home to Libya, where he received a hero’s welcome. President Obama said that the jubilant welcome Megrahi received was “highly objectionable”. His White House spokesman Robert Gibbs added that the welcoming scenes in Libya were “outrageous and disgusting”. British Prime Minister Gordon Brown said he was “angry and repulsed”, while his foreign secretary, David Miliband, termed the celebratory images “deeply upsetting.” Miliband warned: “How the Libyan government handles itself in the next few days will be very significant in the way the world views Libya’s reentry into the civilized community of nations.”[1]

Ah yes, “the civilized community of nations”, that place we so often hear about but so seldom get to actually see. American officials, British officials, and Scottish officials know that Megrahi is innocent. They know that Iran financed the PFLP-GC, a Palestinian group, to carry out the bombing with the cooperation of Syria, in retaliation for the American naval ship, the Vincennes, shooting down an Iranian passenger plane in July of the same year, which took the lives of more people than did the 103 bombing. And it should be pointed out that the Vincennes captain, plus the officer in command of air warfare, and the crew were all awarded medals or ribbons afterward.[2] No one in the US government or media found this objectionable or outrageous, or disgusting or repulsive. The United States has always insisted that the shooting down of the Iranian plane was an “accident”. Why then give awards to those responsible?

Today’s oh-so-civilized officials have known of Megrahi’s innocence since 1989. The Scottish judges who found Megrahi guilty know he’s innocent. They admit as much in their written final opinion. The Scottish Criminal Cases Review Commission, which investigated Megrahi’s trial, knows it. They stated in 2007 that they had uncovered six separate grounds for believing the conviction may have been a miscarriage of justice, clearing the way for him to file a new appeal of his case.[3] The evidence for all this is considerable. And most importantly, there is no evidence that Megrahi was involved in the act of terror.

The first step of the alleged crime, sine qua non — loading the bomb into a suitcase at the Malta airport — for this there was no witness, no video, no document, no fingerprints, nothing to tie Megrahi to the particular brown Samsonite suitcase, no past history of terrorism, no forensic evidence of any kind linking him to such an act.

And the court admitted it: “The absence of any explanation of the method by which the primary suitcase might have been placed on board KM180 [Air Malta to Frankfurt] is a major difficulty for the Crown case.”[4]

The scenario implicating Iran, Syria, and the PFLP-GC was the Original Official Version, endorsed by the US, UK, Scotland, even West Germany — guaranteed, sworn to, scout’s honor, case closed — until the buildup to the Gulf War came along in 1990 and the support of Iran and Syria was needed for the broad Middle East coalition the United States was readying for the ouster of Iraq’s troops from Kuwait. Washington was also anxious to achieve the release of American hostages held in Lebanon by groups close to Iran. Thus it was that the scurrying sound of backtracking could be heard in the corridors of the White House. Suddenly, in October 1990, there was a New Official Version: it was Libya — the Arab state least supportive of the US build-up to the Gulf War and the sanctions imposed against Iraq — that was behind the bombing after all, declared Washington.

The two Libyans were formally indicted in the US and Scotland on Nov. 14, 1991. Within the next 20 days, the remaining four American hostages were released in Lebanon along with the most prominent British hostage, Terry Waite.[5]

In order to be returned to Libya, Megrahi had to cancel his appeal. It was the appeal, not his health, that concerned the Brits and the Americans. Dr. Jim Swire of Britain, whose daughter died over Lockerbie, is a member of UK Families Flight 103, which wants a public inquiry into the crash. “If he goes back to Libya,” Swire says, “it will be a bitter pill to swallow, as an appeal would reveal the fallacies in the prosecution case. … I’ve lost faith in the Scottish criminal justice system, but if the appeal is heard, there is not a snowball’s chance in hell that the prosecution case will survive.”[6]

And a reversal of the verdict would mean that the civilized and venerable governments of the United States and the United Kingdom would stand exposed as having lived a monumental lie for almost 20 years and imprisoned a man they knew to be innocent for eight years.

The Sunday Times (London) recently reported: “American intelligence documents [of 1989, from the Pentagon’s Defense Intelligence Agency (DIA)] blaming Iran for the Lockerbie bombing would have been produced in court if the Libyan convicted of Britain’s worst terrorist attack had not dropped his appeal.” Added the Times: “The DIA briefing discounted Libya’s involvement in the bombing on the basis that there was ‘no current credible intelligence’ implicating her.”[7]

If the three governments involved really believed that Megrahi was guilty of murdering 270 of their people, it’s highly unlikely that they would have released their grip on him. Or is even that too much civilized behavior to expect.

One final note: Many people are under the impression that Libyan Leader Moammar Qaddafi has admitted on more than one occasion to Libya’s guilt in the PanAm 103 bombing. This is not so. Instead, he has stated that Libya would take “responsibility” for the crime. He has said this purely to get the heavy international sanctions against his country lifted. At various times, both he and his son have explicitly denied any Libyan role in the bombing.

[5] Read many further details about the case at http://killinghope.org/bblum6/panam.htm