Why Not Crippling Sanctions for Israel and the US? 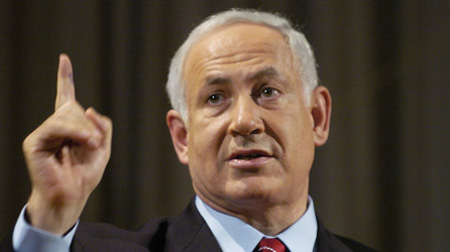 In Israel, a country stolen from the Palestinians, fanatics control the government.  One of the fanatics is the prime minister, Benjamin Netanyahu.  Last week Netanyahu called for “crippling sanctions” against Iran.

The kind of blockade that Netanyahu wants qualifies as an act of war.  Israel has long threatened to attack Iran on its own but prefers to draw in the US and NATO.

Why does Israel want to initiate a war between the United States and Iran? 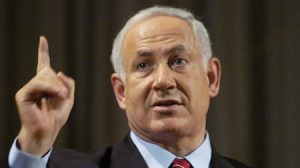 No.  These are crimes committed by Israel and the US.

Is Iran evicting peoples from lands they have occupied for centuries and herding them into ghettoes?

No, that’s what Israel has been doing to the Palestinians for 60 years.

What is Iran doing?

Iran is developing nuclear energy, which is its right as a signatory to the Non-Proliferation Treaty.  Iran’s nuclear energy program is subject to inspections by the International Atomic Energy Agency (IAEA), which consistently reports that its inspections find no diversion of enriched uranium to a weapons program.

The position taken by Israel, and by Israel’s puppet in Washington, is that Iran must not be allowed to have the rights as a signatory to the Non-Proliferation Treaty that every other signatory has, because Iran might divert enriched uranium to a weapons program.

In other words, Israel and the US claim the right to abrogate Iran’s right to develop nuclear energy. The Israeli/US position has no basis in international law or in anything other than the arrogance of Israel and the United States.

The hypocrisy is extreme.  Israel is not a signatory to the Non-Proliferation Treaty and developed its nuclear weapons illegally on the sly, with, as far as we know, US help.

As Israel is an illegal possessor of nuclear weapons and has a fanatical government that is capable of using them, crippling sanctions should be applied to Israel to force it to disarm.

Israel qualifies for crippling sanctions for another reason.  It is an apartheid state, as former US President Jimmy Carter demonstrated in his book, Palestine: Peace Not Apartheid.

The US led the imposition of sanctions against South Africa because of South Africa’s apartheid practices. The sanctions forced the white government to hand over political power to the black population.  Israel practices a worse form of apartheid than did the white South African government.  Yet, Israel maintains that it is “anti-semitic” to criticize Israel for a practice that the world regards as abhorrent.

What remains of the Palestinian West Bank that has not been stolen by Israel consists of isolated ghettoes.  Palestinians are cut off from hospitals, schools, their farms, and from one another.  They cannot travel from one ghetto to another without Israeli permission enforced at checkpoints.

The Israeli government’s explanation for its gross violation of human rights comprises the greatest collection of lies in world history.  No one, with the exception of American “christian zionists,” believes one word of it.

The United States also qualifies for crippling sanctions. Indeed, the US is over-qualified. On the basis of lies and intentional deception of the US Congress, the US public, the UN and NATO, the US government invaded Afghanistan and Iraq and used the “war on terror” that Washington orchestrated to overturn US civil liberties enshrined in the US Constitution.  One million Iraqis have paid with their lives for America’s crimes and four million are displaced.  Iraq and its infrastructure are in ruins, and Iraq’s professional elites, necessary to a modern organized society, are dead or dispersed.  The US government has committed a war crime on a grand scale.  If Iran qualifies for sanctions, the US qualifies a thousand times over.

No one knows how many women, children, and village elders have been murdered by the US in Afghanistan.  However, the American war of aggression against the Afghan people is now in its ninth year. According to the US military, an American victory is still a long ways away.  Admiral Michael Mullen, Chairman of the US Joint Chiefs of Staff, declared in August that the military situation in Afghanistan is “serious and deteriorating.”

Older Americans can look forward to the continuation of this war for the rest of their lives, while their Social Security and Medicare rights are reduced in order to free up funds for the US armaments industry.  Bush/Cheney and Obama/Biden have made munitions the only safe stock investment in the United States.

What is the purpose of the war of aggression against Afghanistan?  Soon after his inauguration, President Obama promised to provide an answer but did not. Instead, Obama quickly escalated the war in Afghanistan and launched a new one in Pakistan that has already displaced 2 million Pakistanis.  Obama has sent 21,000 more US troops into Afghanistan and already the US commander in Afghanistan, General Stanley McChrystal, is requesting 20,000 more.

Obama is escalating America’s war of aggression against the Afghanistan people despite three high profile opinion polls that show that the American public is firmly opposed to the continuation of the war against Afghanistan.

Sadly, the ironclad agreement between Israel and Washington to war against Muslim peoples is far stronger than the connection between the American public and the American government.  At a farewell dinner party last Thursday for Israel’s military attache in Washington, who is returning to Israel to become deputy chief of staff of the Israeli military, Admiral Mike Mullen, chairman of the US Joint Chiefs of Staff, Undersecretary of Defense Michele Flournoy, and and Dan Shapiro, who is in charge of Middle East affairs on the National Security Council, were present to pay their respects.  Admiral Mullen declared that the US will always stand with Israel.  No matter how many war crimes Israel commits.  No matter how many women and children Israel murders. No many how many Palestinians Israel drives from their homes, villages, and lands.  If truth could be told, the true axis-of-evil is the United States and Israel.

Millions of Americans are now homeless because of foreclosures.  Millions more have lost their jobs, and even more millions have no access to health care.  Yet, the US government continues to squander hundreds of billions of dollars on wars that serve no US purpose.  President Obama and General McChrystal have taken the position that they know best, the American public be damned.

It could not be made any clearer that the President of the United States and the US military have no regard whatsoever for democracy, human rights, and international law.  This is yet another reason to apply crippling sanctions against Washington, a government that has emerged under Bush/Obama as a brownshirt state that deals in lies, torture, murder, war crimes, and deception.

Many governments are complicit in America’s war crimes.  With Obama’s budget deep in the red, Washington’s wars of naked aggression are dependent on financing by the Chinese, Japanese, Russians, Saudis, South Koreans, Indians, Canadians and Europeans.  The second this foreign financing of American war crimes stops, America’s wars of aggression against Muslims stop.

The US is not a forever “superpower” that can indefinitely ignore its own laws and international law. The US will eventually fall as a result of its hubris, arrogance, and imperial overreach. When the American Empire collapses, will its enablers also be held accountable in the war crimes court?