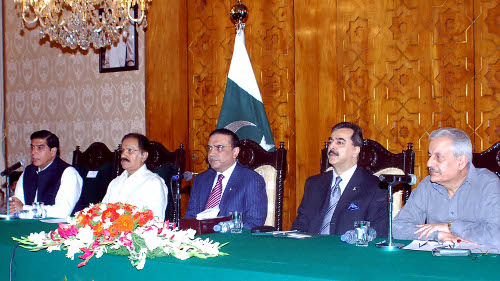 ISLAMABAD, July 6 — President Asif Ali Zardari has said that the Pakistan Peoples Party (PPP) will rid the Constitution of all undemocratic clauses in consultation with other political forces to “change the repressive system that had spawned terrorism, militancy and dictatorship in the country”.

He said this while addressing the Central Executive Committee (CEC) of the Party which met in the Presidency on Monday. The meeting was attended by members of the Central Executive Committee including the Prime Minister. Bakhtawar Zardari Bhutto, the daughter of Co-Chairman and President Asif Ali Zardari, also attended the meeting as a special invitee.

Spokesperson of the President former Senator Farhatullah Babar said that the meeting was the 5th in the series of the CEC meetings held in the Presidency during the last 10 months. The meeting lasted for over 5 hours, during which the current political situation and the proposed Constitutional amendments were discussed, he said.

The President said that the PPP will redeem its pledge to democratize the Constitution. Some others may have other agendas, but the PPP is clear about its commitment to democratic principles and will fulfill it.

President Asif Ali Zardari said that there was a need to undo the 17th Amendment and section 58(2)(B) to reform the Constitution in the light of Charter of Democracy.

After the marathon discussion, the CEC adopted a number of resolutions.

The Party reiterated the resolve to continue the fight against militancy to its logical end, besides reiterating commitment to reform the Constitution and make it democratic, federal, and parliamentary in character, the Spokesperson said.

He said that one of the resolutions said that at present the most serious threat to Pakistan emanated from within rather than from without and called for addressing the internal security threats to the country urgently.

Following are the Resolutions adopted at the CEC:

The CEC of the PPP reiterates its resolve to continue the fight against militancy till its logical end.

We must win this war; we will. The CEC pays tributes to the members of defence forces and law enforcing agencies for valiantly fighting and for their sacrifices in the war against extremists and militants.

The CEC also pays homage to the internally displaced persons for the sacrifices rendered by them and vows to take all measures necessary for their safe and honourable return to their homes at the earliest.

The meeting reiterates commitment of the Party to reform the Constitution, in consultation with all political parties, and make it truly democratic, federal and parliamentary in character.

The 17th Amendment and Article 58(2) B will be undone and the Constitution amended in the light of Charter of Democracy (CoD).

The CEC resolves to pursue the policy of national reconciliation with a view to collectively finding a solution to the country’s myriad problems.

The issues and problems confronting the nation are so complex and varied that no one Party or institution can solve them effectively. A resolution of our problems requires collective national effort backed by all political forces and state institutions. Hence the need for pursuing the policy of broad based national reconciliation.

While mindful of the external threats and expressing determination to meet them the Party believes that at present the most urgent and serious threat to the country was from within.

It therefore calls for addressing the issues of internal security threats in the right earnest and on priority basis.

The CEC has noted that the difficult economic decisions taken by the government have started showing results.

It salutes the people of Pakistan for enduring the impact of difficult economic decisions and expresses the hope that very soon the corner will be turned around and complete economic recovery achieved.

The CEC resolves to overcome the problem of unemployment by generate greater economic activity through public private partnership and the building of Reconstruction Opportunity Zones (ROZs). The process of reinstatement of employees sacked after the removal of PPP government in 1996 will be expedited.

The CEC notes with appreciation that 5th July has been termed as “a sad day in the Constitutional history of Pakistan” by the Judicial Conference held at the forum of Law and Justice Commission.

The CEC of PPP reposes complete faith and trust in the leadership of Co-Chairman, President Asif Ali Zardari.

It also reposes full confidence in the policies of the government.