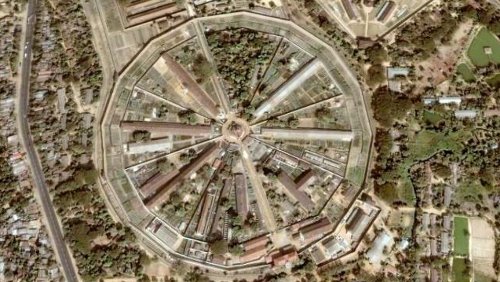 The name of the interviewee has been changed to protect the identity of innocent people at risk of being harmed by the military junta in Burma. The interviewee has also requested that the following account be dedicated to Aung San Suu Kyi and all nightbirds incarcerated in prisons through Burma.

Imagine losing the ability to communicate about horrific life experiences in your native tongue, or being unable to sleep for more than an hour every night.

Your company is the painful cries of others whose lives are slowly ticking away, and who arewaiting for that inevitable moment when the weight of a death sentence finally crushes the body and spirit.

Yet somehow, in spite of the isolation, despair, and suicidal thoughts, your body refuses to lay down forever and become landfill for an unofficial graveyard.

In Burma, few words strike terror into the heart of a human bring like the words Insein Prison, a destination that can only be described as hell on earth. This is where the leader of Burma’s military regime, Senior General Than Shwe, intends to place Nobel Peace Prize recipient and democracy icon Aung San Suu Kyi.

Ma Khine knows about Insein Prison all too well, and as a survivor her experience leads to a dire warning. “My greatest fear is that if Aung San Suu Kyi is sent to Insein Prison, she will die. That is what the military regime wants, to silence her forever.”

In 1999, Ma Khine was sentenced to two and a half years jail in Burma’s notorious Insein Prison. She and her husband lost everything they had worked for. More harrowing for Ma Khine is the thought of losing her ability to speak Burmese.

The former inmate points out that she nearly lost the capability to express herself, linking this to the consequences of being locked inside the walls where nightmarish accounts of survivors are seldom revealed.

Ma Khine fought her sentence immediately upon being transferred into Insein Prison. She attributes this to having a family steeped in a tradition of fighting for democracy. Although she succeeded in not serving her full sentence, the six month period she remained locked up produced memories of the most horrific nature.

Amongst the worst experiences were a suicide attempt, exposure to a bare room filled with sick and dying newborn babies, and rows of women rolling in their own pit of blood following miscarriages.

“The children…” Ma Khine laments, our conversation grinding to a halt. Her wounds from Insein Prison open up, and a resolute woman is reduced to tears from recalling the most difficult periods in her life.

These days Ma Khine manages a small shop, which also serves as a community center for individuals from Burma.

Ma Khine’s husband was jailed in 1998 and refuses to speak to anybody about why he was taken away. “He just wants to forget about the past,” she says. While he served his sentence, Ma Khine lobbied and secured his transfer to a clinic, but she was forced to bribe military officials, lawyers, judges, superintendents and prison wardens.

“I gave them every possession I had just to get him out and ensure that he received proper attention in a hospital.”

In between awkward silences, Ma Khine believes that the true nature of looking out for a lifetime partner is displayed in times of adversity. She believes that one of God’s greatest gifts is that she and her husband were never locked up at the same time.

“If one of us is in jail, the other one is always lobbying from the outside for our release. That is how we have managed to survive,” she adds. “When I was fighting for my release, I also helped feed the women inside the (makeshift) clinic. My husband collected money from outside of jail to bring in supplies of fresh fruit and cooked food.”

Burma is today most often associated with genocide, rape, torture and poverty inflicted upon the civilian population, but Ma Khine recalls images of a more peaceful time years after Burma obtained independence in 1948, one year after its architect General Aung San, father of jailed democracy leader Aung San Suu Kyi, was assassinated.

“When I was young, my parents told me stories that at least the British respected human rights and that we had food,” she begins. “Back in the days when Britain ruled over Burma, their saying was ‘The Sun Is Always Shining.’” This refers to the coloniser’s perceived eternal presence, but as Ma Khine tells me, “every empire crumbles.”

“The military junta hate the British but they are worse than anyone could ever have imagined,” Ma Khine says, and she is convinced that the regime’s decision to changed Burma’s name to Myanmar was to rid its colonial links and assert patriotism through the use of brute force.

In snubbing criticism from the outside world, the junta has adopted a localized spin on the saying once coined by the British rulers by declaring “The Sky Is Always Blue”. This refers to the junta’s stated beliefs that poverty, unhappiness and human rights abuses do not exist, even in the wake of Cyclone Nargis, which killed more than 140,000 people and left millions homeless. Unofficial reports from within Burma have estimated that the toll is closer to 300,000.

“The people of Burma are tired of what the military is doing to them. They are so poor, they have nothing,” Ma Khine laments. To her, it is inconceivable that people should die of hunger in a country that is rich in resources.

Ma Khine’s grandfather was a mayor and chief justice for ten years prior to General Ne Win’s military coup in 1962. Her father was a freelance lawyer who supported and advised members of the National League for Democracy, including Aung San Suu Kyi and U Tin U. “His focus was on representing the poor people and never charged them any money for his services,” she adds.

In 1996, the experience of owning a business in her home country turned sour for Ma Khine and her husband. Ma Khine’s father argued that they were the rightful owners, but the regime ignored their pleas. She says the junta imprisoned her because of her father’s political affiliation, something the regime exploited for their own gain.