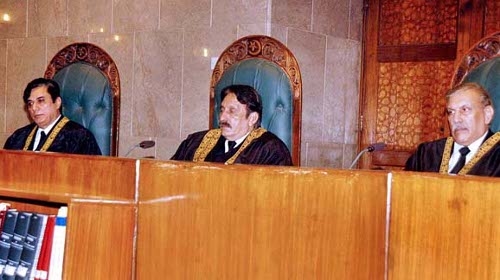 During the reinstatement campaign for Pakistan’s Supreme Court Chief Justice Iftikhar Chaudhry after he was booted out by President Musharraf amid allegations of misuse of office, an impression has been created by politicians and lawyers — those who were leading the campaign of his restoration — that Pakistan’s justice system will stand revolutionized with his return. 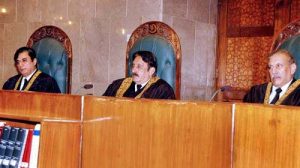 They even tried to convince the people that Justice Chaudhry is a messiah who is about to lead them into a utopia — a typical falsehood perpetrated in the past on the people of Pakistan by similar campaigners. Obviously, political and public pressure could not have been built without such rhetoric.

Musharraf was projected as the Goliath and justice Chaudhry, the David. Things, however, were not that cut and dry.

But by failing to dispel these impressions, Justice Chaudhry chose to swim with the flow in the interest of his campaign. In the process, he adopted a position that does not seem tenable, and if he does not deliver now, which seems most probable given the magnitude of the problem, his own position and that of the judiciary he heads would begin to sink again once the euphoria of his reinstatement dies down and the people’s expectations rise.

Responsibility now devolves on Justice Chaudhry to ensure that the judiciary, higher and lower, makes a complete departure from improper practices of the past. There is no room for cosmetic changes any more. Usual committees and commissions will take the judiciary nowhere. It requires a strong moral fiber, leadership, determination and a sense of urgency to immediately set into motion the process of a meaningful reform. He has a long tenure left and a lot can be achieved.

When allegations of misuse of office against Chief Justice Chaudhry first became public through the open letter of a senior lawyer, Mr. Naeem Bukhari, it shocked everyone but surprised no one. In a scandal ridden country where bigger allegations have gone unnoticed, this was a drop of ink in the ocean.

This was because the story of judicial system across the board is so pathetic that people now prefer hiring a judge rather than a lawyer as a surer and cheaper way to win litigation.

A system degenerates in the absence of accountability. Unfortunately, in Pakistan accountability for a judge is impossible. The unbecoming conduct of judges of higher courts could only be challenged at the challenger’s own peril because their exalted position has made them holy cows placing them above the law, while “Contempt of court” and “Suo Moto” actions provide them tools effective enough to scare away those demanding public accountability. For a vindictive judge, even this article could be enough cause for action.

Appeasement of rulers by the judiciary began with the infamous 1954 judgment by the then Chief Justice Munir, who has since been condemned for having given preeminence over the legislature to a figurehead governor general  and creating the viceregal tradition in Pakistan’s politics. He paved the way for a tradition of miscarriage of justice. Bhutto’s “judicial murder” was added as another dark chapter in our judicial history. The judiciary time and again obliged military dictators by legalizing their actions, martial law, and abrogation of the constitution by invoking the ‘”octrine of Necessity”, a concept that never found any legs to stand on.

As for the lower judiciary, the lesser said the better. Given its corruption and incapacity to enforce the rule of law, political administrations, legislators, political cronies and bureaucrats freely misuse power and indulge in rampant corruption. The poor are exploited and subjected to human rights abuses.

Despite this sad state of affairs, Justice Chaudhry or his advocates, barring some rhetoric, held no concrete promise of reform during his long campaign. While his new found interest in judicial activism will make some difference and much as Suo Moto actions will bring relief to few parties, also raising his profile in the process, these actions will neither set the judicial system right nor provide relief at the grassroots level where miscarriage of justice is endemic.  Much more needs to be done.

A judiciary that can be manipulated suits politicians and military rulers. They will never reform it. The judges would hate to subject themselves to a stringent code of conduct and would prefer the status quo. Whether a newly fired up Justice Chaudhry will bring transparency to the judicial system or replace the existing antiquated system of judicial accountability with the one that works remains to be seen. But only a transparent and honest judiciary can prove to be the harbinger of a reformed political process.

While talking of accountability, one cannot overlook the maxim that accountability must begin at the highest level — a universal principle that Islam also upholds. So it is proper for the Justice Chaudhry to make a clean breast of allegations leveled against him by Mr. Bukhari and President Musharraf, which raised the political storm. Since transparency, integrity and independence of judiciary were the slogans that became the centerpiece of his long public campaign, it is only logical that he now sets a personal example.

This assumes even greater importance because the Supreme Judicial Council (SJC) refrained from judging him on the “Reference” submitted by the president of Pakistan, although this forum is mandated by the Constitution to do just that. In the absence of any determination by SJC or clarification by Justice Chaudhry himself, and given the politicized nature of his campaign, which culminated in his reinstatement under political pressure, credibility issues will continue to raise their head.

It is yet to be clarified to the nation whether or not the son of its Chief Justice was appointed and promoted in government jobs in violation of the merit criteria, or whether the Chief Justice really misused government aircraft for personal travel, or whether he in fact demanded a guard of honor on outstation visits, a protocol he is not entitled to, etc.

The campaign for Justice Chaudhry’s reinstatement attracted the Nawaz-led Muslim League and some smaller political parties that had opted out of the last electoral process. While the smaller parties were trying to ride the judicial bandwagon to gain some legitimacy, the intentions of the Nawaz League in doing so were motivated by the promise of a huge political windfall for its leaders, who were fighting for survival in a political wilderness and who were otherwise known to hate judicial independence. Although a strange bedfellow to the judiciary, Mr. Nawaz Sharif was allowed to virtually highjack Justice Chaudhry’s campaign, apparently under a deal brokered by Barrister Aitzaz Ahsan, the person who spearheaded it.

He is the same Mr. Sharif who as Prime Minister is reputed to have manipulated judges and engaged in public confrontation with the Supreme Court’s Chief Justice Sajjad Ali Shah, who refused to oblige him in a case. An Irate Mr. Sharif then let loose his party goons on the Supreme Court to physically assault and intimidate the judges into submission.