Iran’s Fascism, and Ours

Gary Sick at the Daily Beast explains how the Islamic Revolutionary Guards Corp (IRGC) have become a formidable power in Iran. “Technically,” he writes, “they take their orders from the leader, but has he ever dared to contradict them? On the contrary, he seems always to court them by granting them ever-greater influence and responsibilities.”

President Ahmadinejad “has appointed his fellow guardsman to positions throughout the bureaucracy” and “The economic role of the Revolutionary Guards has been remarked on in recent years. The Guards themselves and companies run by the Guards have won major contracts in every corner of the economy, from airport construction to telecommunications to auto manufacturing.” 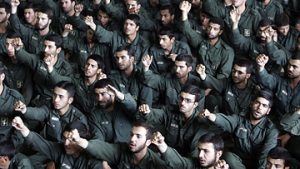 “This is a formula for the kind of militarized and nationalist corporate state under a single controlling ideology that is not dissimilar to fascist rule in an earlier day”, concludes Sick.

He might just as well have been describing America’s military-industrial complex and the corporate revolving door of Washington.

It hardly needs to be said that there’s a tendency for American journalists and pundits to criticize and condemn the practices of other countries, and yet, while the criticisms and condemnations are often well deserved, at at the same time there seems to be an ideological barrier preventing these same characteristics from being recognized when they are shared by our own government.

Consider this comment in the New York Times several days ago: “The government has made it a practice to publicize confessions from political prisoners held without charge or legal representation, often subjected to pressure tactics like sleep deprivation, solitary confinement and torture, according to human rights groups and former political prisoners.”

A fair charge, no doubt. The human rights record of the Islamic Republic is less than stellar. The point in this Times article, though, is to say: Look at those bad Iranians; they torture people into making “confessions” that the reason they took part in the protests following Iran’s disputed presidential election is because they were influenced by foreign propaganda. We must therefore dismiss the accusations.

There are two points to be made here. First, it’s certainly a correct conclusion that such “confessions” should be dismissed as evidence for the accusations of foreign interference, and such methods of coercion are certainly condemnable.

But the tendency of late in the mainstream media and blogosphere to simply dismiss the possibility that Western propaganda or covert black ops could have had anything to do with the chaos in the streets following the election is difficult to explain, considering the long history of U.S. interference in the internal affairs, including in elections, of other nations.

The rest of the world aside, in just Iran alone, the U.S. history is a quite remarkable one. The CIA in 1953 paid people to rampage through the streets in an effort to destabilize the government of Prime Minister Mohammed Mossadegh, and to start clashes with opposing groups who were also out on the streets and who, unbeknownst to either party, had also been doled out cash to by the CIA. Iranian reporters were paid off and the U.S. flooded the country with propaganda. During the chaos in the streets, the CIA issued false information such as that Mossadegh had stepped down and the new prime minister had already taken over the office.

The successful coup, of course, was followed by a quarter-century of tyranny under Shah Reza Pahlavi’s brutal rule. The CIA helped the Shah to create the SAVAK secret police who served as his Praetorian Guard and intimidated, tortured, or disappeared the Shah’s political opposition.

Then came the Islamic Revolution in 1979. The U.S. closed its embassy and pulled out, leaving the CIA without a base of operations.

But that didn’t stop the U.S. from selling weapons to the Iranian regime in the 1980s. The Prime Minister at the time, incidentally, was none other than Mir Hossein Mousavi, the reformist candidate in the Iranian election whose followers have accused the government of electoral fraud. It was Mousavi’s good buddy, arms dealer Manucher Ghorbanifar, who served as the go-between for the U.S., Israel, and Iran during the arms-for-hostages deals.

Ali Akbar Hashemi Rafsanjani, a principle supporter of Mousavi during the recent election, was then Speaker of the Parliament. It was during this period of time that Hezbollah, backed by the government of Rafsanjani and Mousavi, held American hostages in Lebanon. The arms deals were intended in part to see the release of the hostages (and in part to finance the U.S. terrorist war against Nicaragua), but the cost for every next hostage just went up and Hezbollah just kidnapped more Americans. When the CIA cut Ghorbanifar out of the deal, he blew the whistle on the operations that became known as the Iran-Contra Affair.

The U.S. also provided Iran military intelligence during the war with Iraq, whom the U.S., incidentally, was also supporting and providing with intelligence.

Under the Bush administration, the U.S. policy of regime change became well established under the guise (surprise, surprise) of a movement to “promote democracy”. The so-called neoconservatives in the administration had long listed Iran alongside Iraq as being countries where the U.S. should seek to implement a change of regime. Under the Bush administration, efforts to broadcast propaganda into Iran were stepped up, support for dissident and opposition groups was increased, and the CIA and Pentagon began running covert operations in the country, including by backing terrorist groups like the Mujahideen-e-Khalq (MEK), Kurdish rebels, and Jundullah, according to former U.N. weapons inspector Scott Ritter, investigative journalist Seymour Hersh, and others.

We are supposed to believe, apparently, that this train suddenly came to a halt as soon as Barack Obama was sworn into the Executive Office. This is a dubious assumption, for one because of the fact that such policies gain a momentum that makes it very difficult to slow, much less reverse, even if so desired. Consider, for example, the debate that has arisen from Obama’s executive order to close the prison facility at Guantanamo Bay, Cuba, and the opposition to it just on the grounds that Bush’s detention policy has gained too much momentum for the U.S. to just up and close “Gitmo” on a whim from the President.

For another, Obama’s foreign policy has largely been a continuation of Bush’s and is in many regards virtually indistinguishable from his predecessor’s.

Recently criticized for the military withdraw from urban centers in Iraq, for instance, the Obama administration correctly pointed out in response that the agreement with the Iraqi government under which this occurred was negotiated and finalized under the Bush administration.