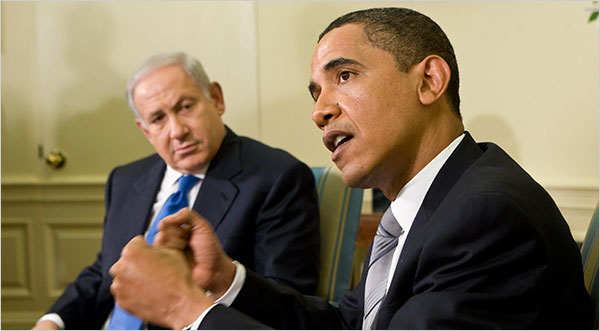 Unpredictability and irregularity have long been the large-scale Iran policy implemented by the people residing in Beit Hanassi and Beit Aghion, representing the long-term objectives of Israeli statesmen and conservative pundits recommending how to cope with Iran, a so-called member of the “Axis of Evil”.

The 10th Presidential Elections of June 12 in Iran that resulted to the reelection of incumbent President Mahmoud Ahmadinejad, along with the extensive aftermath and consequences the official announcement of his victory brought, created a venue both for world leaders and global media outlets to  make some hullabaloo,  stir chaos, and provoke international conflict, if possible; Israel was among the entities that clutched the opportunity consummately.

The “only democracy” of the Middle East, [1] whose record of 22-day collective punishment and massacre in Gaza has been immediately rubbed out of the memory of European leaders and opinion-makers after a few days of reluctant and artificial condemnation, is again returning to the “international” community’s agenda as a firebrand Prime Minister Benjamin Netanyahu “endorsed” the creation of Palestinian state, a movement which the U.S. President Barack Obama described as “positive” and the UK’s Independent called “unprecedented for the Israeli hawk”. [2]

Returning to the days of escalating conflict in Gaza in early January 2009, when a human enclosure of 1.5 million people were subject to an incessant aerial and ground assault, we find a handful of bitter realities which have remained unnoticed or advertently overshadowed.

In the early days of the outburst of violence, Azmi Bishara, the former member of Knesset called the actions of Israel “war crimes” [3] and the Norwegian People’s Aid group criticized the “war crimes” of  theIsraeli regime in the strongest terms an international organizations had ever dared to, condemning “the disproportionate military use of violence and the blockade of an entire population”, described as “clear breaches of the international law for humanitarian concerns as laid down in the 4th Geneva Convention, both where the obligations of an occupying power and the rules of warfare are concerned.” [4]

In an astonishing remark by a high-ranking official within the governmental body of the country which sold a total of £22m [5] arms and ammunition to Israel in 2005, the former Shadow Minister of Labor and the Member of U.K. Parliament Sir Gerald Kaufman called Olmert, Livni and Barak “mass murderers [and] war criminals” who “bring shame on the Jewish people whose Star of David they use as a badge in Gaza”.

Similarly, Chris Mullin, a former Foreign Office minister, stated that the incidents of Gaza “are war crimes that we are witnessing”. Britain should start talking with E.U. allies about sanctions and “at the very least to stop selling them weapons and, perhaps, the withdrawal of our ambassador”. [6]

The renowned peace activists also didn’t remain silent and indifferent in the face of growing conflict. The South African Anglican Archbishop Emeritus and the 1984 winner of the Nobel Peace Prize Desmond Tutu said in a statement that “in the context of total aerial supremacy, in which one side in a conflict deploys lethal aircraft against opponents with no means of defending themselves, the bombardment bears all the hallmarks of war crimes.” [7]

Although the United Nations appointed a South African judge Richard Goldstone to lead a fact-finding mission into the Gaza Strip, and while the United Nations High Commissioner for Human Rights Navanethem Pillay correspondingly set off investigations into possible war crimes in Gaza, and despite the fact that Amnesty International branded as a “war crime” the Israeli regime’s use of white phosphorus and indiscriminate attacks on the inhabitants of Gaza strip which resulted in an immense number of casualties, [8] everything was soon forgotten.

The stained reputation of the Israeli regime faded and relationships were reconstructed in a matter of months, with lobbying and the reversion of international attention to the other issues such as U.S-Iran relations, Iran’s nuclear program, Iran’s elections, etc.

Israel benefits from instability in Iran, upon whom it can simply project its own instability and internal crises. With the dispute between political parties in Iran, Israel claims the role of a good-intended and compassionate nation who looks for freedom, reform, and betterment for it’s neighbor.

Evidently, the Israeli-Palestinian conflict is a matter which sooner or later the international community will be investigating elaborately and making an ultimate judgment of, and the decision, if founded in justice, fairness and objectivity, will not favor Israel.

To distract the international attention on its own actions, to buy time, to expand the settlements and go on with the ethnic cleansing policies, Israel needs Iran direly; a hotheaded adversary whose president purportedly seeks to enrich uranium  to build nuclear weapons, who has called for Israel to be “vanished from the pages of history” or “wiped off the world map”, and who is still funding “terrorist organizations” to threaten the existence of Jewish state.

What could be more precious to Israel than turmoil and unrest in a country that does not let up  in denouncing imperialism and Zionism, which the multinational corporate media have succeeded in demonizing and portraying as a hazardous, terrorist-nurturing country?

There are a few important observations to be made. First, the Iranian election was a simple stage of political competition between the campaigns of reform and conservatism (what is called principlism in Iran). The prominent reformist leader, Mir-Hossein Mousavi, whom the mainstream media began to mischievously call the “opposition leader” after the elections, had promised to pursue the policy of détente with the world, in order to bring back the “lost dignity” of Iran and consolidate the position of the country in the volatile region of Middle East. He had stated that “even if we want to help our brothers in Lebanon and Palestine, we should be first strengthen and sturdy ourselves.”  He had never expressed that he would start bowing down to the demands of the West unconditionally, freeze the nuclear program of Iran (the thing the U.S. and Israel are afraid of the most),or withdraw from the cause of Palestine if elected. Some western pundits, and even Iranian intellectuals, misinterpreted him and inferred that he would become an American “stooge” or “marionette” while looking for a partial compromise and easing of tensions.

Second, right before and after the elections, Israeli officials and thinkers began to release contradictory, seditious and ambiguous statements regarding their alignment toward the candidates and the probable results of the elections. By encouraging the expansion of post-election demonstrations and protests in Iran, Tel Aviv signified either its fundamental ignorance about Iranian realpolitik or its perspicacity.

It goes without saying that Israeli statesmen were aware of the intentions of protesters in post-electoral unrest in Iran. Protesters were the frustrated fans of the reformist hopeful Mir-Hossein Mousavi and believed that their votes had been manipulated in a “fraudulent” election where their beloved candidate had lost. They were not the north-Tehran bourgeois looking for a change of government to restore a secular monarchy under Reza Pahlavi. Nobody would chant a single slogan implying opposition to the state or system, and all of the marchers had been seeking a domestic solution within the framework of the Islamic Republic of Iran’s constitution. Netanyahu was drastically wrong in saying that “the courage shown by the people of Iran in facing bullets in the streets for the sake of freedom is something that deserves the salute of free men and women everywhere”. [9]