By what standard shall we judge Barack Obama? 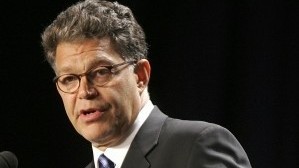 Many of my readers have been upset with me for my criticisms of President Obama’s policies. Following my last two reports, more than a dozen have asked to be removed from my mailing list. But if you share my view that the numerous atrocities U.S. foreign policy is responsible for constitute the greatest threat to world peace, prosperity and happiness, then I think you have to want leaders who are unambiguously opposed to America’s military adventures, because those interventions are unambiguously harmful.

There’s nothing good to be said about dropping powerful bombs on crowds of innocent people, invading their land, overthrowing their government, occupying the country, breaking down the doors of the citizens, killing the father, raping the mother, traumatizing the children, torturing those opposed to all this … Barack Obama has no problem with this, if we judge him by his policies and not his rhetoric.

And neither does Al Franken, who’s about to become a Democratic Senator from Minnesota. The former Saturday Night Live comedian would like you to believe that he’s been against the war in Iraq since it began, but he’s gone to Iraq four times to entertain the troops. Does that make sense? Why does the military bring entertainers to soldiers? To lift the soldiers’ spirits. Why does the military want to lift the soldiers’ spirits? A happier soldier does his job better. And what’s the soldier’s job? All the charming things listed above. Doesn’t Franken know what these guys do? He criticized the Bush administration because they “failed to send enough troops to do the job right.” [1] What “job” did the man think the troops were sent to do that had not been performed to his standards because of lack of manpower? Did he want them to be more efficient at killing Iraqis who resisted the occupation?

Franken has been lifting soldiers’ spirits for a long time. This past March he was honored by the United Service Organization (USO) for his ten years of entertaining troops abroad. That includes Kosovo in 1999, as imperialist an occupation as you’ll want to see. He called his USO experience “one of the best things I’ve ever done.” [2] Franken has also spoken at West Point, encouraging the next generation of imperialist warriors. Is this a man to challenge the militarization of America at home and abroad? No more so than Obama.

Tom Hayden wrote this about Franken in 2005 when Franken had a regular program on the Air America radio network:

Is anyone else disappointed with Al Franken’s daily defense of the continued war in Iraq? Not Bush’s version of the war, because that would undermine Air America’s laudable purpose of rallying an anti-Bush audience. But, well, Kerry’s version of the war, one that can be better managed and won, somehow with better body armor and fewer torture cells. This morning Franken was endorsing Sen. Joe Biden’s proposal to send 5,000 NATO troops to close the Syrian-Iraq border, bring in foreign trainers for the Iraqi officer corps, and put Iraqis to work cleaning up the destruction of our invasion. … Now that Bush has manipulated us into the invasion, Franken thinks we have no choice but to … stay until we crush the insurgents. It’s a humanitarian excuse for open-ended American occupation. And it’s shared widely by the professional political and pundit class who think of themselves as the conscience of the American establishment and the leadership of the Democratic Party. [3]

I know, I know, I’m taking away all your heroes. But such people shouldn’t be your heroes. You can learn to see through the liberal, Democratic Party apologists for the empire. Only a week ago, documents released by the Nixon Library in California revealed that five days before US and South Vietnamese troops made their surprise invasion of Cambodia on April 29, 1970 — which elicited widespread, angry protests in the US, resulting in the fatal shootings by the National Guard of students at Kent State University in Ohio — President Richard Nixon got approval for the invasion from the top Democrat on the Senate Armed Services Committee, Sen. John Stennis of Mississippi. Stennis told the president: “I will be with you. … I commend you for what you are doing.” [4]