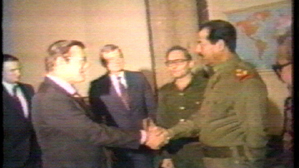 The mainstream media is reporting that former Iraqi President Saddam Hussein told his FBI interrogators after his capture that he lied about having weapons of mass destruction (WMD) because he feared Iran. But there’s just one problem with this claim: Saddam Hussein never claimed to have WMD, but , as everybody knows, repeatedly denied that this was so.

This propaganda line had its origins early on following the U.S. invasion of Iraq. David Kay, who early on headed up the CIA’s effort to find WMD, the Iraq Survey Group (ISG), suggested at the time that Saddam had “bluffed” about having WMD in order to deter Iran.

The deception served to absolve the Bush administration of responsibility for having lied about the “threat” by making it seem as though it was reasonable to arrive at that conclusion since Saddam had claimed to possess WMD, even though he did not.

In actual fact, however, far from admitting possession, Iraq repeatedly denied having WMD in the months and years leading up to the invasion.

The “Saddam ‘bluffed'” claim, though, has lived on. It reared its ugly head again in January 2008 when Saddam’s interrogator, FBI agent George Piro, was interviewed for CBS 60 Minutes. Piro explained that he told Saddam he liked his poetry, and Saddam boasted that he wrote all his own speeches, too. Piro saw an opportunity and said he assumed some of his speeches had been written by someone else, because they had a different style. Piro recalled telling Saddam, “And in June 2000 you gave a speech in which you said Iraq would not disarm until others in the region did. A rifle for a rifle, a stick for a stick, a stone for a stone”.

The 60 Minutes report here inserted, “That June 2000 speech was about weapons of mass destruction.” And the interviewer, Scott Pelley, asked Piro why Saddam would put his nation at risk “to maintain this charade” of having WMD. Piro replied, “It was very important for him to project that because that was what kept him, in his mind, in power. That capability kept the Iranians away. It kept them from reinvading Iraq.”

The George Washington University National Security Archive released the FBI summaries of Saddam’s interrogation received through a Freedom of Information Act request this week, and the “Saddam ‘bluffed'” claim is again making the headlines.

The Associated Press reports, “The documents also confirm previous reports that Saddam falsely allowed the world to believe Iraq had weapons of mass destruction — the main U.S. rationale behind the war — because he feared revealing his weakness to Iran, the hostile neighbor he considered a bigger threat than the U.S.”

The USA Today blog “On Deadline” similarly reports, “Iraqi dictator Saddam Hussein, in 20 formal interviews and at least five casual conversations with the FBI, said he was bluffing publicly about having weapons of mass destruction because he feared showing weakness to Iran, according to newly released FBI summaries.”

The Christian Science Monitor’s “global news blog” , under a headline reading “Why Saddam Hussein lied about Iraq’s weapons of mass destruction“, states that “Saddam Hussein encouraged the perception that Iraq had weapons of mass destruction (WMD) because he was afraid of appearing weak in Iran’s eyes, according to nearly two dozen declassified transcripts of an FBI agent’s conversations with the former Iraqi dictator released Wednesday.”

A London Telegraph headline reads “Saddam Hussein ‘lied about WMDs to protect Iraq from Iran‘”. The article states, “Saddam Hussein told the FBI that he misled the world into believing Iraq still possessed weapons of mass destruction because he feared revealing his weakness to Iran, according to declassified interview transcripts.”

The Israeli daily Haaretz carries a Reuters report headlined “FBI: Saddam told us he lied about having nukes to deter Iran“, which states that “Saddam Hussein believed Iran was a significant threat to Iraq and left open the possibility that he had weapons of mass destruction rather than appear vulnerable, according to declassified FBI documents on interrogations of the former Iraqi leader.”

The only quote from the documents used to support the assertion that Saddam “lied” about having WMD is a statement in the interrogation summaries that reads, “Hussein believed that Iraq could not appear weak to its enemies, especially Iran.”

But that statement says nothing about WMD.

The entire relevant section from the released summary of a June 11, 2004 interrogation reads: “SSA Piro then asked Hussein if he wrote his own speeches and they come from the heart, then what was the meaning of his June 2000 speech. Hussein replied this speech was meant to serve a regional and operational purpose. Regionally, the speech was meant to respond to Iraq’s regional threat. Hussein believed that Iraq could not appear weak to its enemies, especially Iran. Iraq was being threatened by others in the region and must appear able to defend itself.”

The only reference to WMD comes in the next sentence, which belies the assertion that the documents show Saddam “lied” about having WMD: “Operationally, Hussein was demonstrating Iraq’s compliance with the United Nations (UN) in its destruction of its Weapons of Mass Destruction (WMD)” (emphasis added).

The reference to Saddam’s June 2000 speech is also important. First, this was well before the move had begun under the Bush administration to implement regime change, an effort that began in earnest in 2002. U.N. inspectors returned under a resolution passed in November 2002.

Second, while 60 Minutes asserted that this speech “was about weapons of mass destruction”, this is merely a widely propagated and dubious interpretation. In that speech, Hussein noted that the U.S. has “used the United Nations as a cover” to “issue resolutions” against Iraq before saying, “However, we must protect our country because we will not give them Iraq. We do not like to collect weapons for the sake of collecting weapons. But we consider the provision of the necessary means to protect our country an ethical and moral responsibility that every Iraqi man and woman must shoulder.”

Hussein continued on to say that Iraq would be “most enthusiastic” to limit weapons. “We told President Husni Mubarak: You can go ahead and announce that the Arabs are prepared to join any treaty to rid the region of the so-called weapons of mass destruction. We told him: This does not mean only ballistic missiles, which are no more than artillery of a longer range”. His condition was “that the Zionist entity”, Israel, “is the first to sign such a treaty.”

Hussein continued, clearly demonstrating that the “weapons” he was referring to were not WMD, but the conventional arms of Iraq’s military forces. “If the world tells us to abandon all our weapons and keep only swords,” Hussein said, “we will do that. We will destroy all the weapons, if the destroy their weapons. But if they keep a rifle and then tell me that I have the right to possess only a sword, then we would say no.”

The claim that Hussein was declaring in this speech to possess WMD is simply false, dependent entirely upon the dubious interpretation that his talk of rifles and swords was a metaphor for “anthrax” or “mustard gas”, and willfully ignorant of the fact that the only “so-called weapons of mass destruction” Saddam actually claimed to have in this speech were conventional ballistic missiles forbidden under U.N. resolutions, and not WMD.

The bottom line: It wasn’t Saddam Hussein, who lied about Iraq having WMD; it was the U.S. government.