What Obama Isn’t Going to Change About Military Commissions 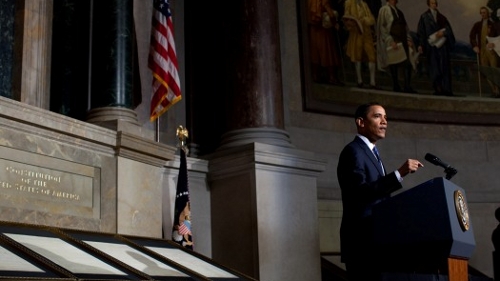 President Barack Obama stands before the U.S. Constitution at the National Archives to give a speech in which he outlined his policy towards Guantanamo detainees (Pete Souza/White House)

President Barack Obama stands before the U.S. Constitution at the National Archives to give a speech in which he outlined his policy towards Guantanamo detainees (Pete Souza/White House)

President Barack Obama reiterated in a speech on Thursday that he would continue with the Bush administration’s policy of trying prisoners of the U.S. “war on terror” not in the Federal court system but through military commissions, which he described as “an appropriate venue for trying detainees for violations of the laws of war.”

Obama criticized the Bush administration’s use of the commissions, however, and announced that his administration would make several changes. “We will no longer permit the use … as evidence statements that have been obtained using cruel, inhuman, or degrading interrogation methods”, he said.

“We will no longer place the burden to prove that hearsay is unreliable on the opponent of the hearsay. And we will give detainees greater latitude in selecting their own counsel, and more protections if they refuse to testify.”

Obama’s plan is to use military commissions to try detainees held at the military detention center at Guantanamo Bay, Cuba, which he has ordered closed by the end of the year.

The first problem with Obama’s continuation of Bush’s policy, albeit a “kinder, gentler” version of it, to borrow Glenn Greenwald’s tongue-in-cheek description, is that “the overwhelming bulk of the objections to what the Bush administration did was to the very idea of military commission themselves”, as Greenwald observed last week.

“The controversy … was grounded in the argument that there was absolutely no reason other than to pervert justice and enable easy and due-process-free convictions, to create a separate tribunal rather than use our extant judicial processes.”

One thing Obama isn’t changing is the fact that the detainees are considered “unlawful enemy combatants” under the Military Commissions Act of 2006.

Under the Act, and “unlawful enemy combatant” means anyone who has “engaged in hostilities” against the U.S., “including a person who is part of the Taliban, al Qaeda, or associated forces”.

That pretty much includes anyone who has exercised his right to take up arms against the foreign invading and occupying U.S. forces in Afghanistan; a right protected under the U.N. Charter, which recognizes “the inherent right of individual or collective self-defense” against armed attack.

A “lawful enemy combatant”, by contrast, is a member of a regular, uniformed army, under the military commissions.

To understand the significance of this distinction and its application under the military commissions, by this logic, un-uniformed members of the state militias fighting the British Redcoats during the American Revolutionary War must be considered to have been “unlawful enemy combatants” – a determination the officers of King George’s army would no doubt have agreed with.

Furthermore, if we apply the standard, we must reject the notion that the colonists had any kind of inherent right of individual or collective self-defense against the British forces attempting to enforce the King’s rule in the colonies.

If we are unwilling to accept such conclusions, then the alternative must be that we reject the standard applied under the military commissions.

One might object to this on the basis of it drawing a comparison between American revolutionary militia men and members of al Qaeda and the Taliban, but, all else aside, this objection ignores the fact that under the military commissions, one is defined as a member of “al Qaeda” or the “Taliban” simply by virtue of the fact that one has taken up arms against U.S. forces in Afghanistan.

Moreover, individuals being held in prisons such as the facilities at Bagram Air Force Base, Afghanistan, Abu Ghraib, Iraq, or Guantanamo Bay, Cuba, are not necessarily even among those who have exercised their right to take up arms against a foreign military occupation.

One of the methods by which the U.S. captured such individuals was by handing out thousands of dollars in cash rewards to people who would turn in members of “al Qaeda” or the “Taliban”.

One doesn’t have to be a genius to see the flaw in this plan. Obviously, cash, particularly in the amount given by the U.S. in as poor a country as Afghanistan, is a pretty tempting incentive to turn over someone’s name to the U.S. as being among the “enemy”, whether they actually are or not.

We don’t know which of the detainees were actually participating in hostilities and which of those simply had the bad luck of being in the wrong place in the wrong time and maybe being guilty of making one of their neighbors angry enough to seek revenge by giving their names to the U.S.

Or they may not have been guilty of even that, but rather just turned over by strangers who had no other reason for doing so other than wanting to receive $5,000 in cold, hard cash.

Under the military commissions, “hearsay evidence” is explicitly admissible so long as the accused can’t demonstrate “that the evidence is unreliable or lacking in probative value”.

In other words, the burden of proof is on the accused, rather than the accuser.

The Military Commissions Act of 2006 states explicitly that “A statement obtained by use of torture shall not be admissible in a military commission”.

But the Bush administration got around that clause simply by defining torture as not-torture. Torture was simply redefined as some kind of legitimate “interrogation method”, albeit an admittedly “harsh” one.

And evidence obtained from “harsh interrogation methods” isn’t excluded under the military commissions.