Business As Usual in Washington As Humanitarian Crisis Looms in Pakistan 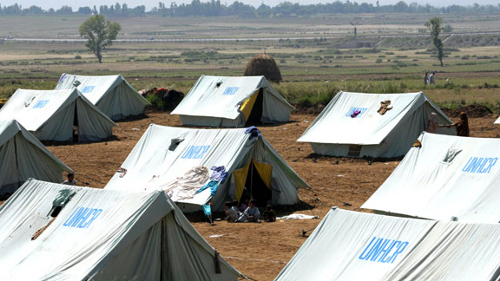 A U.N. IDP camp in the Swabi disctrict set up by the UNHCR to accomodate refugees from Pakistan's military offensive in Swat and Buner (AFP) 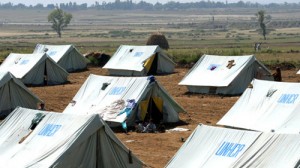 A U.N. IDP camp in the Swabi disctrict set up by the UNHCR to accomodate refugees from Pakistan's military offensive in Swat and Buner (AFP)

A major offensive against militants in the Swat and Buner districts of Pakistan is underway, as thousands of civilians flee the area, headed for refugee camps that have been set up to help mitigate the crisis.

The offensive marks the complete collapse of a peace agreement between the government and Pakistani Taliban forces. Under the truce, the Taliban would be allowed to implement Sharia, or Islamic law, in Swat. But as Taliban forces took advantage of the lull in an attempt to expand their influence into Buner, the deal fell apart.

“To restore the honor and dignity of our homeland and to protect our people, the armed forces have been called in to eliminate the militants and terrorists,” Gilani announced in a televised address. “We will not bow before extremists and terrorists.”

He also said, “The militants have waged war against all segments of society. I regret to say that our bona fide intention to prefer reconciliation with them was perceived as a weakness on our part.”

The operations had already begun earlier this week, prior to the presidential meeting in Washington.

The Obama administration’s special envoy for the region, Richard C. Holbrooke, said on Tuesday, “Until yesterday, the momentum did not appear to be in the right hands. The army has now begun a major offensive. We’ll have to wait and see how it goes.”

Holbrooke was speaking before the House Foreign Affairs Committee of the U.S. Congress. Echoing the rational for U.S. involvement in Pakistan given by President Obama, Holbrooke invoked the terrorist attacks of September 11, 2001 after Congressman Ron Paul criticized Obama’s policy in the region.

Directing his remarks to Mr. Holbrooke, Paul, a presidential candidate during the 2008 election campaign, said, “The main concern I have is I was hoping to see maybe a change in our foreign policy from the last administration, but, of course, we see just more of the same – more nation-building, more policing of the world, more involvement.”

“And it just seems like we never learn from our past mistakes,” he added. He praised the stated objective of working “for a vibrant, modern democracy”, but questioned Obama’s methods. “But think of how we’re doing this. I mean, we label everybody that opposes what we’re doing, we call them Taliban.”

He said there are “many, many thousands of Pashtuns that are right smack in the middle, getting killed by our bombs, and then we wonder why they object to our policies over there.”

“How do you win the hearts and minds of these people if we’re seen as invaders and occupies?” he also asked.

As Paul finished his remarks, a Pakistani in the audience commented, “This American lawmaker has defended Pakistan more eloquently than our ambassador ever has.”

In response, Holbrooke repeated the standard talking point, “The reason we are in this area, notwithstanding its immense difficulties, is because the people in this area attacked our country on September 11th, 2001, and have stated flatly they intend to do it again.”

An editorial today in the Pakistan daily Dawn said Paul’s remarks “regarding the legitimacy of US drone-bombing in Fata [Federally Administered Tribal Areas] comes not a moment too soon.” While the military offensive “suggests that gains are being achieved”, public opinion, meanwhile, “is turning against the militants”.

“In this situation,” the editorial continued, “the continuing US drone incursions are robbing our security forces of some of their moral legitimacy and are, in fact, undermining the war effort.”

“The repeated US violations of the country’s territorial integrity subvert our government’s efforts to make this ‘Pakistan’s war’ and lend currency to the extremists’ claim that Pakistan is merely a pawn in what is, essentially, America’s war,” the editorial added.

Additionally, “the US bombings have resulted in a large number of civilian casualties which, in the public’s mind, outweigh by far any success against the militants. America’s actions stand in danger of being viewed as wanton foreign aggression against innocent populations. And the drone strikes are contributing to the increasing number of refugees fleeing the area. Meanwhile, the Pakistan Army and other security forces continue to suffer heavy casualties in the battles underway on our western borders.”

The editorial concludes, “The American military must confine itself to the western side of the Durand Line”, referring to the border between Afghanistan and Pakistan drawn on a map by the British, so-called after the British foreign secretary Sir Mortimer Durand.

Pakistan’s peace accord with the Taliban in Swat had come under intense criticism from Washington, and U.S. lawmakers have criticized Zardari during his stay, suggesting he had not done enough to combat militants.

“The focus has not been as intense as it ought to be,” Senator John Kerry said, but added, “We’re very, very hopeful now that that is going to change.”

The Senate is expected to vote on a bill that would triple the amount of non-military aid to Pakistan, amounting to $7.5 billion over five years.

Many Pakistanis believe the operation is being carried out at the insistence of the U.S. While in Washington, Zardari made a case for receiving more U.S. taxpayer dollars for Pakistan, but lawmakers made it clear that additional aid would be conditional upon cooperation in combating militants there.