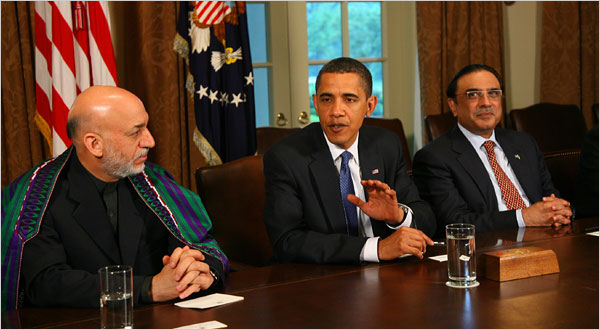 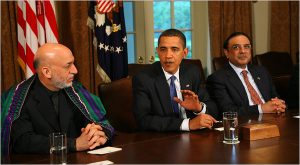 U.S. bombings in the Farah province of Afghanistan on Monday resulted in a large number of civilian deaths. Local villagers gave figures as high as 150 or more dead civilians, but the numbers have yet to be confirmed.

Rohul Amin, the provincial governor, said he saw about 30 bodies, including many women and children, after they were taken in trucks to Farah city, the provincial capital.

A former official in the Bala Baluk district, Mohammad Nieem Qadderdan, said he saw dozens of bodies in Gerani, the village where the killings occurred. “These houses that were full of children and women and elders were bombed by planes,” he told the Associated Press. “It is very difficult to say how many were killed because nobody can count the number, it is too early. People are digging through rubble with shovels and hands.”

Afghan officials were told by villagers that many civilians were taking refuge from the fighting inside a number of housing compounds in Gerani, only to have those sites targeted by U.S. planes.

Shafiqa, a girl who survived the bombing and was treated at the local hospital for her injuries, said, “We were at home when the bombing started. Seven members of my family were killed.”

A U.S. military spokesman confirmed that the U.S. had provided “close air support” to the Afghan National Army during what was described as “an insurgent attack”.

Robert Wood, a U.S. State Department spokesman, said, “We take all reports of such incidents seriously and investigate them thoroughly.”

An Afghan Army battalion commander, Lt. Col. Khalil Nehmatullah, suggested the Taliban had taken cover among the civilians. “Unfortunately the Taliban took people into some buildings and forced them to stay in there after the security forces started telling them to evacuate,” he said.

The International Committee of the Red Cross (ICRC) said in a press release that an ICRC team was not able to confirm an exact number, but suggested it was in the dozens.

“We know that those killed included an Afghan Red Crescent volunteer and 13 members of his family who had been sheltering from fighting in a house that was bombed in an air strike,” said ICRC official Reto Stocker.

The ICRC also could not confirm whether Taliban or other militants had been in the vicinity of the houses when they were bombed, but Mr. Stocker added, “We reiterate our concern that far too many civilians in Afghanistan are killed in incidents such as air strikes and suicide bombings.”

Afghan police also suggested a high civilian death toll. Abdul Rauf Ahmadi, a police spokesman, said, “During the aerial bombardment and ground operations, more than 100 people have died.” Of those, “Twenty-five to 30 of them are Taliban, including from Chechnya and Pakistan, and the rest are civilians including children, women and elderly people.”

The U.S. commander in Afghanistan, Gen. David D. McKiernan, implied the U.S. was not at fault in the killings. “We have some other information that leads us to distinctly different conclusions about the cause of the civilian casualties,” he said.

Other Pentagon officials suggested the deaths were caused by Taliban militants who threw grenades at the civilians, but offered little evidence. “We cannot confirm the report that the Taliban executed these people,” Capt. John Kirby, the spokesman for the Joint Chiefs of Staff, acknowledged.

While President Karzai was in Washington, he met with U.S. Secretary of State Hillary Clinton, who said to him, “I wish to express my personal regret and certainly the sympathy of our administration on the loss of civilian life in Afghanistan.”

She also told him, “We don’t know all of the circumstances or causes. There will be a joint investigation by your government and ours.”

National Security Advisor General James Jones said yesterday in a press briefing that “The President started out his meeting with President Karzai by commenting with great sympathy on the tragedies that have happened out in western Afghanistan, and indicating that we regret the loss of life, particularly of innocent people, and that the investigations underway will be pursued aggressively with full intent to discover what, in fact, did happen, how it happened, and how we can make sure that things like that do not happen again.”

Last August, a U.S. airstrike in the town of Azizabad killed scores of civilians. Villagers insisted that 90 civilians had been killed in the strike, including 60 children, and U.N. investigators said they found “convincing evidence” that a massacre had occurred.

The U.S. at first insisted that only 5 to 7, and accused the villagers of spreading Taliban propaganda, but promised to investigate as a result of the public outcry. The findings from that investigation parroted the initial claim that 30 to 35 Taliban militants had been killed. While acknowledging that civilians had also been killed, the Pentagon stuck with the figure of 5 to 7.

But under continued pressure, and further emerging proof of higher numbers of civilians killed, the Pentagon agreed to conduct a second investigation jointly with the U.N. and the Afghan government.

Cell phone images taken by locals showed 30 or more bodies laid out in a building that served as the local mosque, and the Pentagon was forced to revise their estimate of civilian deaths upwards to 33, the minimal number they could acknowledge while still maintaining some semblance of credibility.

Local Afghans continued to insist on a much higher civilian death toll.