Iraq Committed to June 30 Deadline for Withdrawal of U.S. Forces from Cities 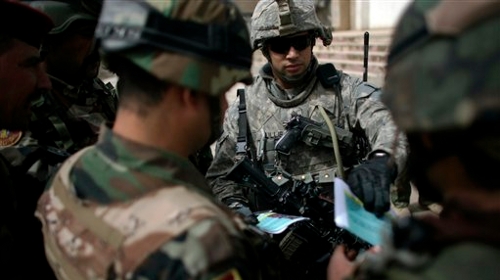 A U.S. soldier briefs his Iraqi colleagues on patrol on May 1, 2009 (Marko Drobnajakovic / AP)

A U.S. soldier briefs his Iraqi colleagues on patrol on May 1, 2009 (Marko Drobnajakovic / AP)

A spokesman for the Iraqi government said this week that the June 30 deadline for the withdrawal of U.S. troops from urban areas would not be extended.

Although there has been some talk that U.S. forces might be asked to stay longer due to an increase in violence in some areas, including the northern city of Mosul, spokesman Ali al-Dabbagh said, “These dates cannot be extended, and this is consistent with the transfer and handover of responsibility to Iraqi security forces.”

The June 30 deadline is part of the status of forces agreement (SOFA) between the U.S. and Iraqi governments signed on November 27, which calls for the complete withdrawal of U.S. forces from Iraq by the end of 2011.

Despite ongoing violence in some areas, such as in the provinces of Baghdad, Kirkuk, Diyala and Nineveh, the U.N. High Commissioner for Refugees (UNHCR) on Tuesday said violence had been reduced enough that Iraqis abroad would no longer get automatic refugee status.

As a result of the U.S. invasion of Iraq in 2003 and subsequent violence, millions of Iraqis were displaced from their homes, including 1.5 million who fled the country.

“We are now saying rather than blanket consideration, these people can be given individual interviews to determine their status,” said UNHCR spokesman Ron Redmond.

While some Iraqis might now be able to return to their homes with improved conditions in some areas, Redmond also cautioned, “The improvement of the situation in Iraq does not yet constitute fundamental change sufficient to promote or encourage massive returns to Iraq.”

Iraqis designated as refugees abroad should not lose their status, he said, adding that “Return should be considered strictly on an individual basis after due consideration is given to the security situation in the area of return, whether the person can return to the place of origin, and if there is the necessary support structure for normal reintegration.”

Sunni militias, which came to be known as Awakening Councils, or alternatively as Sons of Iraq, are largely credited with the reduction in violence over the past few years. As other Sunni militias and terrorist groups increasingly targeted civilians, the Awakening groups turned their focus away from fighting the occupying U.S. forces and towards combating al Qaeda in Iraq and other such terrorist elements.

This trend was picked up on U.S. commanders, who began financing and arming Sunni militias who were willing to cooperate with U.S. forces against such terrorist groups.

But since the Iraq government assumed responsibility for pay rolling the Awakening Councils, there have been some fears that the U.S. had essentially established an armed Sunni opposition force.

The Iraqi government has since cracked down on some Sunni leaders, including the arrest last week of the leader of the Awakening Council in Balad, Mullah Nadim al-Jabouri, along with his two brothers, on charges of terrorism.

Such tensions between Sunni and Shiite groups, including among the latter those with ties to Iran such as the Mahdi Army militia of Shiite cleric Muqtada al-Sadr, have led to fears of a renewed escalation of sectarian violence.

It is just such fears, along with a spate of bombings, that some have sought to exploit to suggest U.S. forces might be required to remain in some cities beyond the deadline at the end of next month.

Others say such fears are overblown, and Iraqis should be allowed to provide for their own security as the U.S. withdraws its forces according to its security agreement with the Iraqi government.

Air Force Lt. Col. Patrick Ryder, a spokesman for the Pentagon, assured that the U.S. would honor the agreement, but left open the possibility that U.S. forces could remain past the deadline if requested by the Iraqi government.

“We have said all along that we are planning to abide by the security agreement,” he said, adding, “We’ve said that any request to stay in the cities longer will come from the Iraqi government.”

In other news, the Iraqi Foreign Ministry summoned the Iranian ambassador on Tuesday to protest the shelling of villages in the largely autonomous northern region of Iraq known as Kurdistan. The shelling caused building damage, but no casualties.

A statement issued by the Iraqi national media centre said, “The Iraqi side understands Iran’s objectives to discipline its borders but that should not be done unilaterally.”

Iranian forces have periodically clashed with Kurdish guerillas along the border. Turkey has also been responsible for attacks against Kurdish forces inside Iraq.