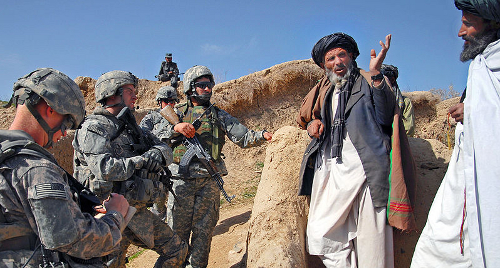 During an interview in 1988, the then chief of Pakistan’s National Awami Party, late Abdul Wali Khan told me, “The Americans supported Afghans not because they loved them, but just to use them in settling scores with the Russians. In this process the Afghans have been the losers. Their tribal society that evolved its own social equilibrium over centuries and their power structure that recognised the king in Kabul as central authority have been ruined. Through monarchy, a loose confederacy of tribes and the Loya jirga they have practised their own form of democracy that served them quite well. And now after the Russian retreat if they are not allowed to find their own political balance and if the Americans force their own brand of democracy on them, the effort is bound to fail with disastrous consequences.”

Abdul Wali Khan was so correct.

Thirty years later, President Obama struggles with the consequences of that American folly and faces the dilemma that his predecessors faced in Vietnam. Neither he can abruptly withdraw from Afghanistan nor can he sustain the erroneous strategy that got America into yet another quagmire.

Like always, the simplistic American policy makers, neocons in this case, thought it would be a piece of cake to militarily subdue Afghanistan overnight and then move on to conquer Iraq. To their dismay the adventure turned into their worst nightmare, with the genie of terrorism escaping from the bottle in the process.

Bush’s decision to unceremoniously pull out of Iraq shortly before leaving office came very timely for Obama, allowing him to fulfil his campaign pledge of winding down that war and prove his point that it was fought in vain.

Much as President Obama would like to quickly disengage from the ruinous Afghan war, which has come to be characterised as a battle between David and the Goliath, he finds hasty retreat difficult to make.

His real dilemma is the spectre of Jihadist threat to American security. He “will not allow terrorists to plot against the American people from safe havens halfway around the world,” he said.

Jihadis, Al Qaeda followers or movement of the Islamic right, whatever you may call them, remain deeply entrenched in Afghanistan’s south and east and in collaboration with Taliban are increasingly gaining ground. Despite universal opposition to continued military involvement, President Obama risks paying dearly if he chooses to fold his tent and return home, no matter how misconceived it was to begin with.

The sight of the American military giant limping back home, abandoning the much trumpeted war on terror, could signal American withdrawal from the world stage at a time when its monopoly on power is being challenged by other emerging power centres. This would badly compromise Obama’s ability to wield political and military influence in Europe and elsewhere and give Jihadi movements a shot in the arm.

President Obama is acutely aware that he cannot allow Afghanistan to become another Vietnam, for then he stands no chance of winning back his office in 2012. He must, therefore, wrap up the war or come close to wrapping it up before the elections to avoid losing to rejuvenated Republicans and being shunned by war weary voters.

While his administration weighs his best options in an extremely complex situation marked by uncertainties that plague the splintered political landscape, President Obama has agreed to a partial surge in troops. He did that despite the British argument that the war being unwinnable, the number of troops should stay at a level that helps maintain the insurgency at a manageable level.

Through this interim reinforcement of 17,000 troops he sends a message about his determination to raise the ante in a previously resource starved war that will strengthen American forces in the southern and the south eastern sectors under newly created US Southern Command independent of the NATO command structure. Using this reinforcement, American commanders hope to overwhelm the insurgents and choke their massive inflow of funds from drug trade. They believe they can then negotiate with them from a position of strength, when time comes for such a dialogue.

Besides, this surge will also give Obama’s military commanders a much needed breather, while his team works out a final exit strategy. This strategy, however, will have to concede to the insurgents’ demand of withdrawal of US and NATO forces as a precondition for cessation of hostilities.

Efforts at engaging the Taliban in a dialogue have already been initiated. It is an extremely difficult undertaking because other than Mullah Omar’s group, the US army estimates there are another fourteen groups engaged in combat, making it difficult to determine whom to talk to. The distinction between moderate and extremist Taliban is being created for this dialogue essentially to marginalise Jihadis and neutralise their security threat. But this runs the risk of leaving the more dangerous elements out of the settlement who can scuttle any deal with the moderates.

If the dialogue succeeds then after the upcoming presidential elections the Afghan government could be expanded to include Pashtun Taliban to improve its credibility and extend its writ over the Pashtun belt.

Although this sounds too good to be true, yet should these prospects materialise at some point it will be welcomed by NATO countries that remain unwilling partners in this war and refuse to contribute any more troops. It will be good news for Pakistan too, as this would restore some sort of peace and stability in the tribal belt and secure the western border, allowing it to deal with the indigenous breed of notorious Taliban.

By bringing in 4000 military trainers and a large number of civilian specialists, an effort at capacity building will get underway that aims at eventually transferring responsibilities of internal security to Afghan National Army, whose size is planned to be increased to 134,000 troops, and of governance to the central government. With sizable funds for reconstruction and nation building provided by the US and President Obama likely to attract major financial contributions from European allies in lieu of their troops, Afghanistan could finally begin to move in the right direction by 2012.

But even if Obama succeeds moving towards ending the conflict, he will have to take into account the fact that it is no more simply an American issue. It has assumed international character and it will be important to ensure that it is accordingly brought to a close. For a political framework to be acceptable to all parties that are, or have been involved, it will require a multilateral solution.

Given its strategic location and deep divisions along ethnic lines, Afghanistan would always be open to exploitation by outside powers and neighbours to further their own strategic goals. It would be wise, therefore, to impose a ‘standstill arrangement’ on foreign interventions as well as security threats emanating from that country.

Since the outcome of this arrangement would be conditional to the role and conduct of Afghanistan’s contiguous neighbours, namely: Pakistan, Iran and China, they will have to agree to a policy of non-intervention. United Kingdom, Germany, Israel and India will also have to cease their covert operations and leave Afghanistan alone.

For the US it will be prudent to gradually withdraw from this imbroglio leaving it to the UN Security Council to negotiate and implement such an arrangement. Under a mandate of the UN SC an ‘Afghanistan Group of 7′, comprising five permanent members plus Pakistan and Iran should be created and tasked to oversee the gradual withdrawal of foreign troops to be replaced by a UN peacekeeping force. It should also supervise political reintegration and reform and the reconstruction effort.

The Group should also lay down and implement the principles of Afghanistan’s neutrality and international obligations to eliminate terrorism and deal and diffuse any situations that may arise from time to time. The Belgian neutrality model created in the 19th century could perhaps be followed.

While this option is worked out, some important regional issues will need attention.

Pakistan being central to any solution of the Afghanistan issue, its geopolitical sensitivities cannot be ignored. Increasing Indian engagement in Afghanistan that Pakistan deems hostile to its security will force Pakistan to rely on Taliban support to neutralise Indian threat. This necessitates international pressure to be brought upon India to accept the peace accord that Pakistan is agreeable to and that would resolve contentious issues like Kashmir, moving them both towards peaceful coexistence.

Iran must also be brought into the mix. Although Iran has been helpful in Afghanistan in the past, current tensions between the US and Iran will likely cause it to refrain from throwing its weight behind a multilateral arrangement. Engagement of Iran will have to be given serious attention and Israel will have to be kept on a tight leash.

Similarly, Russian apprehensions about American intentions to marginalise it by gaining control over energy resources of Central Asia using Afghanistan as a conduit will have to be allayed too.

Russia, India and Iran will also have to be brought on board to accept US-Pakistan-Saudi Arabia supported Taliban dominated government, owing to their past association with the Northern Alliance.

And above all, American support to the biggest perpetrator of state terrorism – Israel, which in turn has fuelled terrorism around the world, will have to be rationalised.

If indeed Al Qaeda did cause 9/11 to happen, it is time for Obama to acknowledge its causes and address them.

This article was first published in the Pakistan daily Dawn on April 25, 2009.