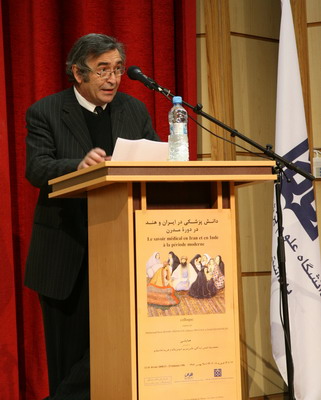 Isabelle Rousselot facilitated this interview by translating for the interviewer from the French language. 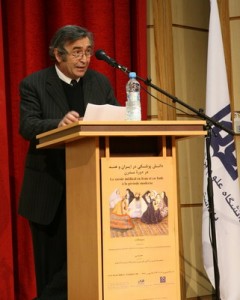 Christian Bromberger is globally renowned as a prolific and outstanding orientalist who has dedicated almost three decades of his life to research and study on the culture and civilization of the Near and Middle East.

Fluent in English, Persian, Russian, Italian, Greek, and French, he has served several years as the Director of French Association of Iranology in Paris and currently holds the Professorship of Ethnology at the University of Aix En Provence.

His latest research titled “the Interrelation of Crafts and Cultures in Guilan or the Exploration of a Society Through the Arts and Crafts”, which reveals some anthropological facts on the lifestyle of people at the North Iranian Province of Guilan, is “applicable to all of the world cultures and sub-cultures”, as he says.

The chapters and papers of Prof. Bromberger have appeared in some 30 books and he is widely popular in Iran because of his research on Persian traditions and subcultures.

Christian Bromberger specializes in the anthropology and genealogy of the Guilaks, an ancient tribe living at the littoral cities of the Caspian Sea in Iran for more than 5000 years. Interestingly, he speaks the complicated and archaic dialect of Guilaks fluently, as though had been born there.

In an interview with Foreign Policy Journal, Bromberger, who has recently left Iran and returned to his home France, speaks about ancient Persian culture, its derivations, ups and downs during history, and its prospects.

“There is a great novel from Diderot, called Jacques le fataliste et son maître (Jacques the Fatalist and His Master) that starts with these words: ‘How did they meet? By chance as everybody does.’ My encounter with Iran happened about the same way,” explains Bromberger about his first acquaintance with Persian culture.

“During my studies in Art & Literature, I was following some ethnology courses and I had chosen an optional class on the Near-East which was given by the great Orientalist, Maxime Rodinson.

“I was attracted to this region of the world. My interest for the Near East, Rodinson’s classes and readings gave me the idea to work on Socotra Island, south of the Arabian Peninsula. However, a quite fortuitous combination of circumstances led me to finally ‘choose’ Iran as a fieldwork. Access to Socotra Island was not easy and at the same time, a research establishment about Iran had just been created within the Musée de l’Homme (Museum of Man) in Paris, where you could easily carry out ethnological studies.

“During my first stay in Iran, I went to Guilan and I have been charmed by this province, by its particular cultural elements whose different aspects, since then, I have been trying to study.” 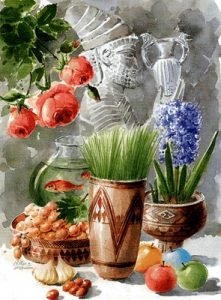 The main field of Bromberger’s research, however, is Nowrouz-related studies. Nowrouz is the ancient Persian celebration which marks the commencement of New Persian Year at the beginning of Spring, March 21st.

The traditions of Nowrouz have been practiced for the last 3000 years in Iran, and recurrently underwent various ups and downs to live on as the most salient national custom in Iran. Nowrouz was suppressed and pushed to disappearance in some periods; nonetheless, it continued to remain in the face of a widespread tendency of Iranians to maintain its existence.

“A first striking characteristic is that Nowrouz is a solar calendar celebration,” Bromberger explains. “This calendar is a different one than the Muslim solar calendar and is a strong symbol of the Indo-European specificity of the Iranian world, coming from ancient times.

“According to tradition, Nowrouz would perpetuate and commemorate the day of the creation of the world by Ahura Mazda (the Ancient deity of Zoroastrians). Several rites and rituals, related to those that mark the beginning of spring in different societies of the Ancient world, scan and celebrate the New Year: a complete cleaning of the house (khâne tekâni), the purchase of new cloth, egg decoration, the making of sprouts of wheat, barley or lentil seeds growing in a dish and that give the sabze (greenery), the making of pastries (samanu), a sweet pudding made from wheat germ and sugar; these two items being part of the Haft-Seen (the Seven S), that includes seven specific items starting with the letter ‘s’ put on a tablecloth, spread on the ground, during this ceremonial time.” 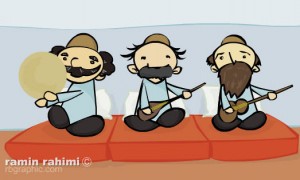 Bromberger explains the traditions of the first night of New Year’s, the Vernal Equinox. “There are several traditions on this night of transition: masquerades, New Year singings (Nowrouzkhâni), divination séances, ritual flights matched with wishes, made by young boys.

“The cycle of the New Year ends the thirteenth day of the first month, the day of Sizdah Bedâr (hit the outdoors on the thirteenth!). In order to avoid the bad luck associated with the number thirteen, families go outdoors and have picnics in a green place. As a sign of the end of the Nowrouz celebrations, the Sabze grown for the haft sin is thrown into running water.”

Bromberger also describes the historical incidents which in some stages diminished the prevalence of Nowrouz as the most prominent national festivity of Iranians, being highlighted and accentuated by the former regime of the Shah as an important symbol of communal honor and nationalistic sentiments.

He explains that how the victory of the 1979 revolution, which unseated the U.S.-backed Shah and began to erase signs of Americanism and Westernism from the face of revolutionized Iran, faded the popularity of Nowrouz in the first years for fear that it might enfeeble the religious solidarity. However, Nowrouz gradually was adopted with religious prototypes and continued to survive with the compromise of authorities and officials who eventually chose to let up and express empathy with the public’s interest in Nowrouz.

“From the 1990’s, that marked the opening of a relative relaxation of the Islamic government,” Bromberger continues. “The national pride took back its rights and ‘specifically Iranian’ folklore was even partially rehabilitated in order to fight against the western cultural invasion.”

Meanwhile, he stresses the importance of Ashura ceremonies which mark the martyrdom of Imam Hossein and states that Iranian people have historically paid tribute to both their national and religious customs.

“Ethnologists and more generally nationalist intellectuals rushed into the breach so much so that seminars, conferences, and books about Nowrouz abound. A sort of Nowrouz-mania seemed to have monopolized the cultural background. It had a strong resonance in the countries of Central Asia and Caucasia, embraced within the historical area of Iranian civilization expansion and sharing the same calendar. That is what is called the Land of Iran and that is what we could call, because of this common reference, the Nowrouzestân.”