‘Shift’ Towards Iran Under Obama Is Change in Tact, Not Policy 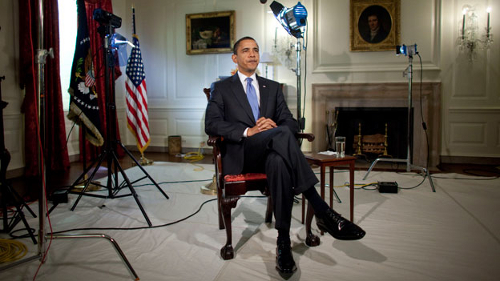 The Obama administration announced this week that it would participate in negotiations with Iran over its nuclear program, something that is being characterized as a significant change from the Bush administration in Western media accounts. The Wall Street Journal, for instance, reported that the move marks “a shift in U.S. policy toward Iran”, while AFP called it a “new direction of US policy”.

But while the “shift” might qualify as a change in tactics, every indication so far is that the actual policy towards Iran under the Obama administration will continue to be indistinguishable from that of the previous administration.

The Obama administration announced that it would participate with other nations in the talks. The other parties to would be Britain, France, Russia, China, and Germany. Together with the United States, these are the five permanent members of the Security Council plus Germany, and so are sometimes collectively called the “P5+1”.

Under the Bush administration, the three European members of the P5+1 had a dialogue with Iran, but the U.S. refused to participate in direct contacts. President Obama, by contrast, has said his administration is “committed to diplomacy”, and the State Department announced this week that the U.S. would join in the talks.

But that is so far the only extent to which there has been any identifiable change in approach. The policy goal remains the same, which is to force Iran to acquiesce to Western demands that it halt uranium enrichment activities. Both Bush and Obama administrations have accused Iran of attempting to develop nuclear weapons, while Iran asserts that its nuclear program is solely for energy production.

That acting assumption remains the same under the new administration, despite the fact that even U.S. intelligence agencies have acknowledged in a 2007 National Intelligence Estimate (NIE) that Iran today has no nuclear weapons program.  The International Atomic Energy Agency (IAEA), the nuclear watchdog group, has repeatedly reported that it has found no evidence that Iran has such a program.

Despite the lack of evidence, the U.S. policy under both administrations is founded upon the same assumption. Along with the announcement that the U.S. would participate in talks, Secretary of State Hillary Clinton declared, “There’s nothing more important than trying to convince Iran to cease its efforts to obtain a nuclear weapon.”

In its report, the Wall Street Journal also noted that “A number of U.S. officials say they’re skeptical Iran is interested in serious negotiations.” This is remarkable since Iran has repeatedly reached out to the U.S. to engage in talks over its nuclear program while it is the U.S. which has rejected such talks. Given the framework carried over from the Bush administration under which the new administration is operating, it is clear is that it is the U.S., not Iran, which will continue to demonstrate no interest in serious negotiations.

While the announcement marks a change in tactic, the actual U.S. policy remains constant. Vice President Joseph Biden in February announced the Obama policy towards Iran in terms indistinguishable from that of his predecessor. The U.S. would be “willing to talk to Iran”, he said, but only if Iran acquiesces to the Obama administration’s demands to abandon its nuclear program.

Now the administration is saying it will talk to Iran, but only to insist on this same demand. Iran has already made clear that it has every intention to continue to enrich uranium for its civilian nuclear program, a right guaranteed under the nuclear non-proliferation treaty (NPT) to which Iran is a party.

The outcome of any talks operating under the present framework is perfectly predictable. The Obama administration will announce that no fruit came of the talks, that Iran was not serious about negotiations, and that only a hard-line approach consisting of the threat of the use of force, either from the U.S. or from its regional ally, Israel, along with tougher sanctions will suffice to accomplish the goal of getting Iran to surrender its nuclear ambitions.

The slight shift in tact will allow the Obama administration to claim that it tried diplomacy, and then justify its hard-line approach on the basis that diplomacy failed. The purpose for the shift, in other words, is to improve U.S. public relations, and not to change its approach towards Iran in any meaningful way.

This is perfectly well understood, and rather candidly stated, despite the propaganda spin about there being a “shift in U.S. policy” designed for consumption by a passive and uncritical public audience. A poll published this week found that a majority of Americans favor of the government holding talks with Iran. The shift is designed to appease both domestic and international opinion, which was overwhelmingly critical of the Bush administration’s unwillingness to attempt to even appear to engage in diplomacy.

One may read in the New York Times, for instance, that “By showing a readiness to engage Iran, American officials said, the administration is trying to build support among allies like Germany and France, and more skeptical players, like Russia, so that if diplomatic efforts fail, it can marshal support for tougher sanctions against Tehran.”

The Wall Street Journal account similarly stated that the Obama administration is “examining ways to increase financial sanctions on Iran if it doesn’t agree to suspend its uranium-enrichment activities.”

Iran’s unwillingness to comply with the U.S. ultimatum is in turn interpreted by the administration as an indication of its intention to produce nuclear weapons, despite the admitted lack of evidence and despite the fact that Iran has enriched uranium only to fuel-grade and not to the amount necessary to even theoretically be able to produce a nuclear weapon. There is also a consensus among analysts, including at the IAEA, that Iran would have to kick out the nuclear inspectors if it wanted to go forward with a weapons program.

A spokesman for the State Department rhetorically asked, “If Iran means very seriously that its program is for civilian purposes only, then why doesn’t it comply with the basic things that the international community has asked Iran to do?”

The U.S. approach towards Iran is complimented by an aggressive Israeli stance. Israel has repeatedly threatened to attack Iran if it does not cede to the U.S. demand to cease uranium enrichment. The new Israeli Prime Minister Benjamin Netanyahu recently remarked that Iran “hopes to exploit the dialogue with the West and Washington to advance toward the production of an atomic bomb” and hinted that Israel would act militarily if talks failed, while the head of U.S. Central Command General David Petraeus said that “the Israeli government may ultimately see itself so threatened by the prospect of an Iranian nuclear weapon that it would take preemptive military action to derail or delay it.”

Israeli Deputy Prime Minister Silvan Shalom expressed solidarity with the idea of the U.S. participating in talks with Iran, but similarly suggested any dialogue would be “an attempt at buying time” for Iran, which, he claimed, was “soon to reach a point of no return” in its alleged attempts to produce a nuclear weapon. Shalom said “There must be a time limit” for such talks, and that sanctions against Iran “must be genuine”, presumably meaning they should be backed by all the major powers, including Russia and China, who have been more reluctant than the U.S. and European countries to punish Iran for exercising a right guaranteed under international treaty.

By insisting in the same policy towards Iran as that of the Bush administration, the U.S. is effectively precluding any possibility for there to be any meaningful and productive outcome from the proposed talks that might serve to diffuse rather than escalate tensions between the U.S. and its allies and Iran.