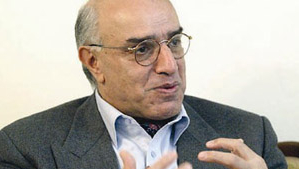 Prof. Pirouz Mojtahedzadeh is a prominent Iranian scholar of foreign policy and international relations. Alongside Prof. Hamid Mowlana, he is considered to be one of Iran’s foreign policy academia giants.

Despite his non-alignment to governmental organizations and his partial residence in London, where he chairs the Urosevic Research Foundation, Mojtahedzadeh explicitly defends Iran’s “inalienable right to possess peaceful nuclear energy” and criticizes the U.S. of applying double standards in the Middle East. He has been long avoided by the mainstream media outlets, as he represents an independent and objective voice regarding the issues of Iran.

Prof. Mojtahedzadeh obtained his professorship of Political Geography from the University of London and was a consultant for United Nations University from 1995 to 1996.

His recent book Boundary Politics and International Boundaries of Iran was published by the Universal Publishers in USA and he usually appears on independent media outlets, alternative newspapers and even the anti-Iranian chained radio and TV channels to propound his viewpoints.

Here is the first part of Foreign Policy Journal‘s interview with Prof. Mojtahedzadeh in which he discusses a broad range of Iran-related issues, from the nuclear standoff to the Persian Gulf disputes.

Professor Mojtahedzadeh; how do you analyze the U.S. double standards regarding the nuclear dossier of Iran? India, Pakistan and Israel have been already producing atomic bombs for their arsenals, and they enjoy immunity on the end of U.S. and U.N. Why is there no fulfillment of the demands of resolutions 1172 and 487 of the UNSC?

To address the first part of this question I might start by saying that what is universally referred to as U.S. double standards regarding Iran’s nuclear dossier in reality is another interpretation of the fact that with their unfounded fear of an Iranian bomb, the U.S. neo-conservatives failed for eight years to acknowledge Iran’s legitimate quest for nuclear energy. It was actually important at the time for a meaningful dialogue with Tehran to deter it from its alleged endeavor for expanding its nuclear technology to bomb-making, as Washington had declared to be their real concern, without being able to produce a shred of evidence in proving it, and in defiance of repeated IAEA reports of investigation that categorically announced no evidence was found to prove said allegations. Even now that the West apparently wants to settle this dispute, they apply the same double standard.

In his recent announcement of a plan for nuclear weapon reduction, British Prime Minister spoke of Iran’s lack of cooperation with IAEA investigations with the 5+1 strategy of the vilification of Iran’s rights and rightful positions, without even hinting to any thought or plan to deal with nuclear rogue states like Israel, Pakistan, and India, who have developed their nuclear arsenal in secret and in defiance of all international rules and regulations including NPT, while all three of the are countries of volatile stability and constantly at war with their neighbors. This is just a small hint of the scale of hypocrisy that the West has approached Iran’s nuclear program with so far.

The allegation that by its nuclear program Iran wants to develop nuclear weapons, though propagated before the neo-cons assumed power in George Bush Junior’s administration, was grossly exaggerated under the neo-cons. This was mainly because of the coincidence of two political developments at the height of Islamophobia of the West towards the end of the twentieth century. First, the neoconservatives found themselves in Bush Junior’s administration in a ripe position to fulfill their geopolitical vision of new world order through implementation of whatever means available to them, including the notion of unilateralism and the unethical idea of pre-emptive action in attempts for realization of regime change in the so-called ‘Greater Middle East’, which was but another name for the political arena traditionally known as the core areas of the world of Islam, and for such populist excuses as spreading democracy.

Secondly, [there is] the unprecedented success that Israel and the Jewish lobbies in the U.S. had achieved in deepening their influence not only on the new administration but within America’s process of decision making.

This development was so far reaching that I can safely say that no administration in the history of the United States had fallen so deeply and so extensively under the influence of Israel and Jewish lobbies as George W. Bush’s lot did. You just need to remember how anti-Iranian neo-con individuals both within and on the fringes of the administration, people like Dick Cheney, Joe Lieberman, John Bolton, Richard Perle, Michael Ledeen and a large number of others worked hand in hand with AIPAC and other Zionist circles.

In their short-sighted views, these neo-con aids and advisers of the U.S. President thought of Iran as a terrorist nation who could not be trusted to have nuclear weapons while India, Pakistan and Israel who are constantly at war with their neighbors are welcomed to have it.

Though Iran had never opted for nuclear weapons, it is sad that the United States of America was not allowed to arrive at the wisdom that a geostrategic imbalance in any geopolitical region amounts to no less than a dangerous imbalance that ought to be the cause for concern about regional stability and global safety.

The U.S. President was deprived of the advice of wise people, which America has never been short of, that Iran is a major cultural, political, and strategic influence in the Middle East. The balances of forces between it and its rivals are the natural desire of the time and space. I explained in my open letter of 16 April 2006 to President Bush that for understandable historical reasons Israel tends to over-exaggerate its security concerns, and this is why Israeli leaders like Ariel Sharon, Shimon Peres, and Netanyahu have convinced the United States [government] of the neo-cons that Iran has already manufactured a nuclear bomb, and the neo-cons bought that lie without any reservation.

They managed to confuse the world opinion with lies like with its nuclear energy program, Iran in reality wants to manufacture nuclear weapons to be used against Israel. Ariel Sharon went as far as declaring in the year 2000 that Iran had already manufactured 6 atomic bombs and wants to drop them on Israel. I argued in my letter to President Bush: Let us assume for the argument’s sake, that Iran has a nuclear bomb and wants to use it against Israel. How could anyone think that an Islamic State would dare to drop an atomic bomb on Israel without causing catastrophe to the Holy Mosque in Jerusalem, and to the Muslim nation of Palestine, the densely populated areas of which are situated in such a close proximity of Israel’s population centers.

Having said all that, we know that Israel’s real concerns is not security threats that it discerns to emanate from Iran’s nuclear program, but the reality is that Israel is highly agitated about the idea or possibility that Iran’s strategic use of its nuclear industry would create a real strategic balance between her and the Muslim world, which would deprive Israel of its present monopoly of nuclear power in the Middle East.