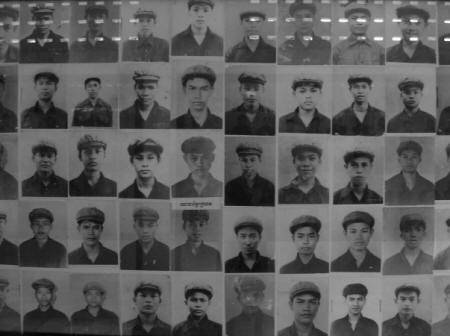 “What exactly are you scared of?” I asked.

Everyone had warned me that this story was dangerous. But, when I asked why, all they said was “You could get hurt.” But by whom? Or what could they do? The questions went unanswered.

“I am afraid of the commandant,” he said.

“And is he politically connected?”

“Does he have weapons?”

“Does he have a following?” I wondered if there was still a KR cult somewhere forming around these old guys.

“So, he is an unarmed 59-year-old farmer, with no power and no followers, but you are afraid of him?”

We had gotten all that I thought we were going to get from the interview. We paid our witness, and then started to get back in the car. There was a tense moment when the 39 year old from the previous day showed up at the survivor’s house. He almost had our car blocked in the driveway, but our driver saw the trap closing. Quickly, but without raising alarm, he backed out of the narrow drive, and on to the dirt road, where it would have been difficult, and obvious to try and block us in.

The look on the 39 year-old’s face was one of both anger and disappointment. If he had blocked us in the driveway he could have waited till his friends arrived. But now that our car was free, there was nothing he could do. He drove off in a puff of red dust.

The fear level in the survivor’s eyes shot through the roof. It was as if he believed that the young man would be back later.

As we waved our final goodbyes, he spoke the words that were the truest and most poignant of our lengthy conversation.

“I am the only former prisoner and the only one who could be a witness against them. If they kill me, the KR trial cannot happen without witnesses.”

The next day, we followed up with Youk Chang, at his office at DCCAM. When I mentioned the survivor, he immediately said, “Oh, the one whose father had gold teeth.”

His memory was amazing.

Once again, I asked Youk Chang, what, specifically the survivor and the others were afraid of.

“They were afraid because many of the officials in these areas are former KR, and they still operate together, and stick together. Young guys growing up don’t know any better. So, they follow them.”

Was my hunch right that the former KR were still building a movement in the bush? It just seemed so unlikely that all hatred died on the day that the cease fire was called in 1997.

The most shocking revelation of the entire story was when Youk Chang told us that the village headman, who we had met on the first day, was actually the former commandant of the prison; the one who had both spared the life of the boy and killed the brother and the father. Now they lived literally four doors away from each other. I had sat two feet away from him, and had no idea of the evil he had done.