Obama and his Dick (Cheney) 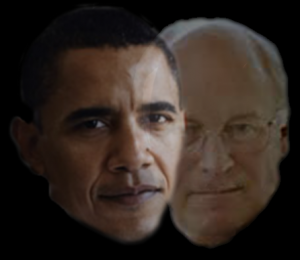 Here’s how well they have us trained: The powers that be are no longer gonna call the illegally detained terrorism suspects (sic) by the name of “enemy combatants.” Like the pre-programmed robots we’ve all become, we’ll celebrate this as a welcome and much-needed change from the reviled Bush-Cheney administration. A step in the right direction, we might even say.

In addition, the Pope of Hope has promised not to torture. Our society is so fuckin’ corrupt that a US president can announce-without shame-a purported plan to say no to committing crimes against humanity. Of course, we view this as “normal” and we foolishly believe him and even praise him.

Obama’s blood brother, Dick Cheney, happily plays his pre-ordained role in this passion play by going on national television and declaring that our (sic) president’s vague pledge to possibly adhere to accepted international law-a pledge more honored in the breach-is making the US less safe.

The pundit patrol gleefully spins into action. You see, what passes for intelligence and insight in America typically involves being handsomely paid to put on a suit and go on TV to debate whether its Obama or his Dick that’s got it right.

This is mental illness in plain view-unabashed, unfettered lunacy not even trying to masquerade as sanity. If we woke up, it would take perhaps 3-5 seconds to recognize this: Obama is a heinous criminal. Cheney is a heinous criminal. The same can be said for the volunteer soldiers and all those who give the orders; the law enforcement types and all those who give the orders; the judges; the professional liars who stock the media ranks; and, of course, all the humans that comprise the power structure of Corporate America.

Since we habitually choose denial instead of rebellion, our willingness to play along at home by, for example, analyzing the subtle nuances that differentiate Obama from his Dick makes us heinous criminals, too. When things are as bad as they are now, there’s more than enough guilt to go around.

Just about everything about US and global culture (e.g. raping the environment, the propaganda machine, avaricious materialism, insatiable military conquest, sexism, homophobia, racism, patriarchy, etc.) adds up to death and destruction. Yet we-the species with the allegedly superior cognitive skills-opt to spend our time getting worked up over Obama debating his Dick.

Joann and John think Obama’s plan is the cat’s meow. Joe and Jane agree with Dick. Big picture: It makes no difference at all.

Whatever side we choose in these fabricated conflicts, human society maintains its steady, relentless path toward mass homicide/suicide. If we ever decide to look up from our text screens and video games, we might actually catch the last act.