The New Cambodian Land Mine Museum 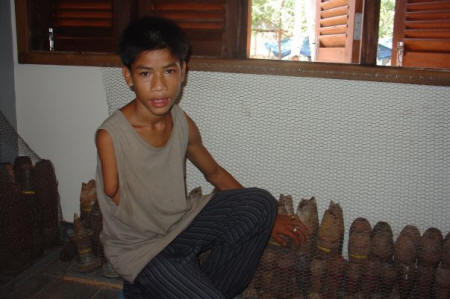 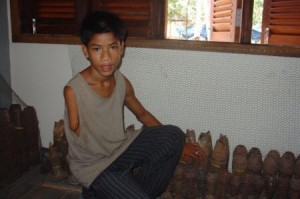 The tiny room was filled with bombs, rockets, bullets, and of course, land mines. “This is one is a Vietnamese mine,” said Boreath, holding up the now disarmed weapon of destruction. He was holding it in his left hand, because his right arm was missing, from the shoulder down. Boreath pointed at what looked like a bear trap. “If you step on this one, and no one come to help you, two hours and all blood go from your body, and you die.” It was not hard to imagine the cruelty of those massive steel jaws slamming shut on your leg. There were some steel jacks, with spikes approximately three inches long. “They throw these everywhere on the ground. When you step on them, they get stuck in your foot.”

Boreath explained nearly every weapon from the display. “This one is American, we call bouncing betty. Step on this one and it jumps up and blows your leg off. These are machine gun bullets. These bombs fall from the sky. This one comes from Russia. This mine is a Chinese copy of an American mine.” Boreath was an expert on explosives and the remnants of a war he could not remember, but to which he still fell victim.

Fourteen year old Boreath is a happy, polite, clean cut Khmer kid who likes playing sports and spending time with his adopted family. Talking to him for just a few minutes you would realize that he is exceptionally bright and that he speaks excellent English. If he wasn’t missing an arm, he could be any child from a privileged Phnom Penh family, who can afford to send their kids to an expensive international school. Looking into his bright, smiling eyes, it is hard to imagine that he is from a poor family, with six children, born in a remote village, where there wasn’t even a school.

“My village was near the Thai border,” explained Boreath. The five provinces on Cambodia’s Thai border are some of the most heavily mined regions in Asia. “Seven years ago, I was playing, digging in the woods, when I hit the mortar bomb.”

The fact that Boreath was playing in the woods nearly two decades after the end of the war did not keep him safe. Unexploded bombs and mines can remain active for up to 150 years.

“Near my village there was no public hospital, only a private one and they didn’t want to help me because my family has no money. So, we went to the military aid station. I stayed there for one month.”

Boreath’s story is all too common in Cambodia. The landmines are a tremendous social problem, as people, particularly farmers, are frequently injured by them. But Boreath’s story illustrates other issues facing the average Khmer family, namely the lack of money and lack of access to competent medical care.

“My family not have school, not have money, not have anything. Three years ago, Aki Ra came to the Thai border to remove mines. He asked me if I wanted to come to Siem Reap and live with his family. And my family agreed.”

Now, Boreath has a roof over his head, three meals per day, a school to go to, plus supplemental English and Japanese lessons taught by volunteers. He also has about twenty new brothers and sisters who live with him, all of whom are landmine victims.

The man who made all of this possible is Aki Ra.

Aki Ra is one of the great heroes of modern Cambodia. Born a Khmer Rouge jungle fighter, Aki Ra spent most of his youth putting mines in the ground. He was later forced into the Vietnamese army, and was employed to put mines in the ground, this time, fighting against the Khmer Rouge. Aki Ra eventually had enough of killing, came of out of the jungle, and surrendered. He served with the UN peace keepers, doing de-mining work. Later, he opened the land mine museum, where he displayed unexploded ordinance, so that foreigners could learn the horrors of the Cambodian genocide. He and his wife also opened his home to landmine victims, raising more than twenty of them as his own children. Aki Ra pays for their food, education, and medical care. Through the support of an NGO, called Handicapped International, he is also able to provide his children with prosthetic limbs. 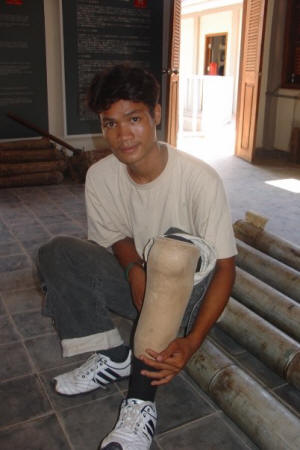 Aki Ra used to have his family living at the Aki Ra Mine Action headquarters, which was at his wooden house and compound near the river. The building wear I met Boreath was the new land mine museum, thirty kilometers outside of Siem Reap city. Although they have already had their grand opening, Stuart Cochlin, a volunteer architect, is helping Aki Ra complete the new center.

“The museum is already opened, but we are still finishing the rest of the complex.” Explained Cochlin. “There will be a school, a clinic, dormitories and a shower block for the kids. There will be a house for Aki Ra and his family, and dormitories for the volunteer teachers.”

“The way it stands now, the kids have to walk seven kilometers to primary school.” Said Cochlin. “The high school is even further away.”

Seven kilometers is a long distance for anyone to walk, but particularly difficult for children who are missing a leg. The rainy season must be especially uncomfortable to undertake such a lengthy hike.

“The school is extremely important.” Said Cochlin, “Many of the kids get teased at school. So, they lost interest in going. The rules in the new house, however, will be, go to school or find somewhere else to live.”

The clinic is also important. On the way to the museum we passed the children’s hospital where hundreds of people stood in line, every day, just to see a doctor.

Construction crews were hard at work on the new center, and hope to have it done in a few months. In the mean time, the kids said they are sleeping in hammocks.