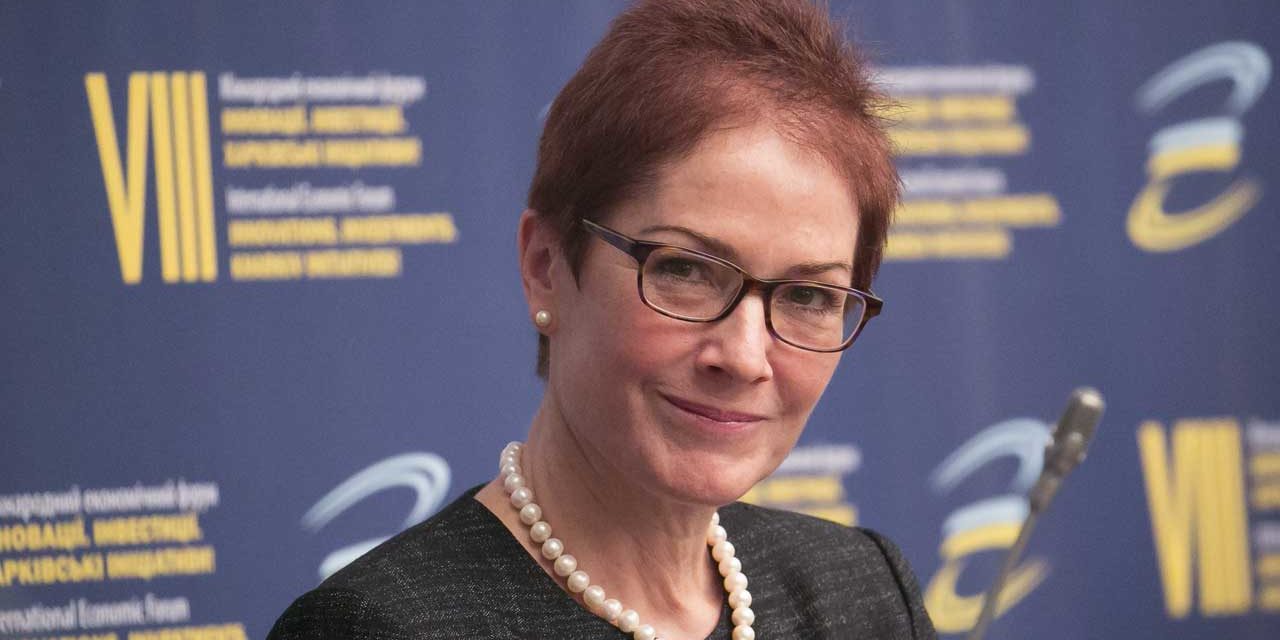 It is disgraceful that the US State Department continues to play diplomatic word games to avoid describing the Armenian genocide as genocide.

Turkey, the increasingly wayward NATO member, has been making more national and international headlines than usual.

On October 29, for instance, the U.S. House of Representatives overwhelmingly passed Resolution 296 (405-11). It recognized the Armenian, Assyrian, Greek, and other Christian genocides committed by Turkey.

Two days later, Marie L. Yovanovitch, dismissed by President Trump in May of 2019 as U.S. Ambassador to Ukraine, testified on national TV before the House Select Committee on Intelligence’s impeachment inquiry. Her dismissal, she alleged, occurred because Trump attorney and confidant Rudy Giuliani, Donald Trump Jr., Fox News hosts, and others had been slandering her as disloyal to the president.

There are intriguing links among the House’s Genocide resolution, the Trump-Erdogan-Senators meeting, and Yovanovitch who was President George W. Bush’s (“Bush II”) Ambassador to the Republic of Armenia.

What no Democratic or Republican committee member dared ask Yovanovitch — and what she didn’t wish to discuss — was her apparent 13-year-long failure to criticize the scandalous dismissal and forced early retirement of a fine American diplomat, John Marshall Evans.

Due to senators’ revulsion at Evans’ dismissal, the ambassadorship stood empty for two years.

Armenian American communities always host U.S. ambassadors to Armenia. In February of 2005, Ambassador Evans told them, “I will today call it the Armenian Genocide” because “it is unbecoming of us as Americans to play word games.”

It was an honest admission of America’s 90-year-long recognition of Turkey’s extermination of 1.5 million Armenian Christians (1915-23). But the State Department disliked Evans’ use of the word “genocide.” Turkey cried foul, too.

At Turkey’s insistence, the State Department tells American diplomats and presidents to avoid the G word (genocide) regarding the Armenian extermination. Such spinelessness, while typical of the State Department’s traditional obsequiousness towards Turkey, is a disgrace.

Yet Ambassador Evans was simply echoing, as but one example, President Reagan’s Proclamation 4838 in 1981 which cited “the genocide of Armenians.”

Regrettably, post-Reagan presidential statements commemorating the Genocide have avoided the G word. They employ euphemisms such as “annihilation,” “forced exile and murder,” “infamous killings,” “terrible massacres,” and “marched to their death.”

Perhaps more significantly, a U.S. filing in 1951 with the International Court of Justice (“World Court”) cited “the Turkish massacre of the Armenians” as “genocide.”

Use of the G word remains important for legal reasons because it is defined in the UN Genocide Convention/Treaty of 1948 which most countries have signed. 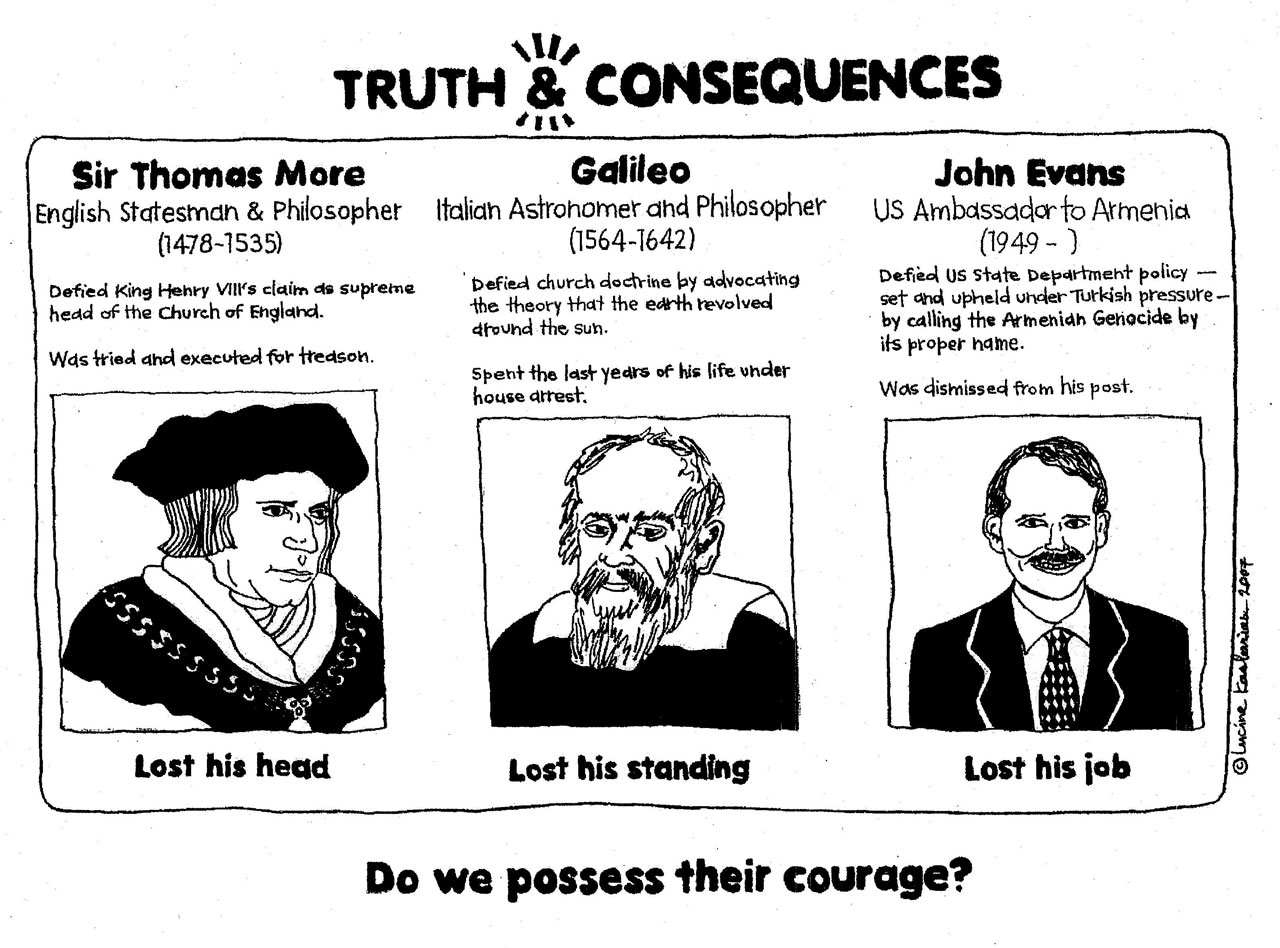 Ambassador Evans was nevertheless forced to issue a clarification in late February of 2005 for uttering the G word. But the State Department didn’t like its wording. So it wrote a clarification of the clarification and ordered Evans to sign it. Though Evans bravely toiled on, his 33-year career was in jeopardy.

The American Foreign Service Association (AFSA) has over 16,000 current and retired Foreign Service members. In 2005, after Ambassador Evans had uttered the G word, AFSA announced he would receive its prestigious “Constructive Dissent Award.”

The award recognizes “initiative, integrity, intellectual courage and constructive dissent” and diplomats who “question the status quo and take a stand no matter the sensitivity of the issue or the consequences” and “stick his/her neck out.” Perfect descriptions of Ambassador Evans.

But Turkish anger and Bush II’s State Department bullied AFSA into withdrawing the award. AFSA’s excuse: Evans’ “genocide” dissent hadn’t gone through official channels. Had Evans done so, though, his entreaty would surely have wound up in a shredder.

Congressman Frank Pallone (D-NJ) blasted the AFSA for setting “a terrible example.” The award “was taken from [Evans] because of politics and denial.”

Her predecessor Ambassador Evans, in contrast, was driven into early retirement in 2006 by the White House. “Born-again Christian” Bush II kowtowed to Turkish pressure over the genocide of a Christian nation.

After a brutal battle, the Senate nevertheless confirmed her in August of 2008.

As ambassador to Armenia, Yovanovitch was reportedly asked whether she’d acknowledge the Armenian Genocide if the president were to do so. One would assume she’d simply say yes. Instead, she dodged the question.

An “ambassador serves his president and may be recalled at any time and for any reason,” she replied (emphasis added). “It fully depends on the president.”

If Yovanovitch really believed that, why is she grumbling about being recalled from Ukraine?

Indeed, newly elected presidents including Obama and Trump usually require current ambassadors to submit their resignations. Perhaps Yovanovitch, appointed by Obama in August 2016, should be grateful that Trump kept her on for 28 months.

Yovanovitch visited Armenian American communities in 2009. She again frustrated them with evasive answers about the Genocide and the conflict between Armenians and Azerbaijan over Armenian-majority Karabagh/Artsakh. I attended one such visit in Arlington, Massachusetts.

And, apparently, Yovanovitch has never commented on Ambassador Evans’ dismissal.

As a presidential candidate in 2008, Senator Obama and his soon-to-be National Security Council member and UN Ambassador Samantha Power promised Armenian Americans to acknowledge the Armenian Genocide if he became president. Power’s Pulitzer Prize-winning A Problem from Hell (2002) devoted chapter 1 to the Armenian Genocide.

Yet President Obama and Power later avoided the G word.

When Hillary Clinton became Obama’s Secretary of State (2009-13), she flip-flopped too. She avoided the G word that she’d used as a New York senator and 2008 presidential candidate.

In 2010, Sec. Clinton laid flowers at Armenia’s Genocide Memorial. She stressed, however, that her stealthy visit was merely “private,” not official.

Yet she and Presidents Clinton, Bush II, and Obama have officially paid their respects at the Kemal Ataturk mausoleum/memorial in Ankara, Turkey. Ataturk was the Turkish leader who continued the Genocide against Armenians and Christian Greeks and Assyrians from 1919 onwards.

While they avoid the G word for the Armenian Genocide, these top American leaders are comfortable honoring a Turkish genocidist.

The Armenian Genocide is nearly universally accepted by expert historians, despite Turkey’s absurd denials. Indeed, for one hundred years, historians have possessed Turkish telegrams that explicitly ordered mass murder. These have been proven, yet again, to be absolutely genuine.

Like his immediate predecessors, President Trump has avoided the G word. But he has called the Armenian Genocide “mass atrocities” and (as did Obama) “Medz Yeghern” (Armenian for Great Crime).

Some impeachment inquiry members knew all about Yovanovitch’s failure to acknowledge the Armenian Genocide and Evans’ dismissal and coerced retirement. Had they brought it up, however, they would have been walking through political minefields.

Republican committee members could easily have damaged Yovanovitch’s credibility. They could have revealed her evasions regarding the Armenian Genocide in her 2008 confirmation hearing and her apparent ongoing failure to express dismay at Evans’ dismissal from the post she inherited. Yet they failed to bring any of this up.

After all, it was Bush II, a Republican, who dismissed Ambassador Evans, appointed Yovanovitch, failed (as has Trump) to recognize the Armenian Genocide, and pressured AFSA to rescind its award to Evans. Plus, Republican Speaker Dennis Hastert of Illinois withdrew an Armenian Genocide resolution in 2000, partly at the behest of former Israeli Foreign Minister Shimon Peres.

Hence, the impeachment inquiry committee didn’t broach the Yovanovitch/Evans issue even though Turkish and Armenian issues were simultaneously swirling around Washington.

And, of course, had questions about Evans led to the hypocritical roles of the Jewish lobby and Israel in denying/diminishing, and defeating resolutions on, the Armenian Genocide, Congress would have been highly embarrassed.

The Senate has a pending Genocide resolution (Res.150) identical to that the House just passed.

But GOP Senators Lindsay Graham of South Carolina, David Perdue of Georgia, James Risch of Idaho, and Majority Leader Mitch McConnell of Kentucky have blocked a vote on it.

President Erdogan is undoubtedly threatening the White House over the resolution and other issues. It doesn’t help that President Trump’s investments in Turkey constitute, in his own words, “a little conflict of interest.”

On May 11, 1920 the Republican majority Senate passed Resolution 359 on the “massacres and other atrocities from which the Armenian people have suffered.” The resolution couldn’t use the G word because it was coined only in 1944 by Raphael Lemkin. He recognized Turkey’s extermination of Armenians as a seminal genocide and drafted the UN Genocide Convention/Treaty.

Does any of this matter?

Aside from moral and humanitarian considerations, yes.

The Caucasus — Armenia, Azerbaijan, and Georgia — remains a geopolitical hotspot and a major flash point between the U.S. and Russia. Much is at stake.

Turkey has threatened Armenia, sometimes with genocidal memes, since the latter’s independence in 1991.

Armenia’s existence, therefore, is continually in peril. It’s a major reason why Armenia allies itself with Russia, the nearest major Christian power.

Armenia has also excellent relations with the U.S. and Europe.

But when American presidents and the State Department play word games with the Armenian Genocide, this does not reassure Armenia, which must draw negative conclusions about America’s trustworthiness and intentions.

That, in turn, is not in America’s interests.

In 2008, Congressman Jim Costa (D-CA) wrote the following to Yovanovitch:

“Denying a traumatic event such as genocide, one cannot create, nor implement, honest and effective diplomacy.”

Those words ring truer than ever.