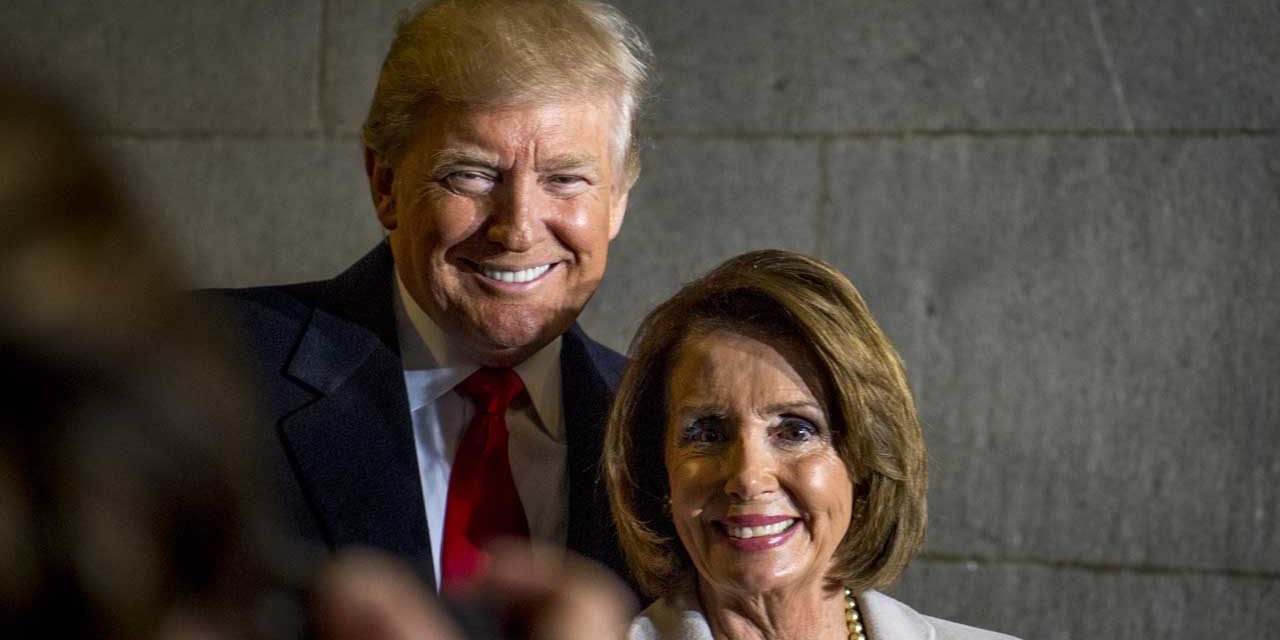 US President-elect Donald Trump and Speaker of the House Nancy Pelosi in Washington, DC, on January 20, 2017 (Staff Sgt. Marianique Santos/Department of Defense)

There are plenty of good reasons to impeach Donald Trump. So why don't the Democrats and their supporters ever mention any of them?

The weaknesses of Ukrainegate are on display in a new book by Neal Katyal (“with Sam Koppelman”) making the case for Ukrainegate, but titled Impeach: The Case Against Donald Trump.

It’s not, of course, the case against Donald Trump. This is the case against Donald Trump: The man is intentionally and openly exacerbating climate collapse. He’s threatened at least two countries with nuclear war. He’s illegally sought to share nuclear technology with Saudi Arabia. He’s escalated several wars and the global drone war. He’s openly declared himself above the rule of law. He’s violated both emoluments clauses with thousands of cases of corruption unprecedented in the annals of presidential sleaze. He’s incited and encouraged racist violence. He has separated children from their families and locked them in cages. He’s pardoned a sheriff who created what he called a concentration camp, in which he put electric fencing around Latino prisoners, some of whom died. He’s pardoned and celebrated grotesque war crimes. He’s instructed border guards to violate the law and promised to pardon them. He’s discriminated in immigration policy on the basis of religion. He’s backed coups in Venezuela and Bolivia. He’s refused to prepare for or reasonably assist after hurricanes. He’s politicized prosecutions, interfered in voting rights, blatantly obstructed justice, colluded against U.S. interests with Israel, repressed freedom of the press, declared national emergencies with the express purpose of illegally spending funds he’d been denied by Congress, and committed tax fraud and deceived the public about his biography. Most of these outrages are indisputable public acts, and most are outlined in a different book.

None of that is even mentioned in Katyal’s book. None of it. It’s not dismissed. It’s not brushed aside. It’s not mentioned. This book claims to make the full case for Trump’s impeachment, and it makes it purely on the basis of Ukrainegate.

In saying that, I’m relying on you to understand that Ukrainegate encompasses Russiagate. That is to say, the primary purpose of Ukrainegate has been from the start to salvage a failed Russiagate and to claim to be building on a somehow successful Russiagate, or a Russiagate that somehow pointed the way but failed on a technicality. So, like the Ukrainegate Congressional testimony, Katyal’s book contains all sorts of disproven and unproven and non-impeachable Russiagate assertions, many of them with no footnotes or any pretense of documentation.

On page one, Katyal paints what he considers a nightmare scenario, asking us to imagine that Ukraine announced an investigation of Biden, that Biden lost the 2020 Democratic Primary for that reason, that the Democrats ran a weaker candidate who lost to Trump, that now for the first time ever a U.S. president was beholden to a foreign government (not counting Grand Master Putin), and that with Trump re-elected it became suddenly too late to do anything about Ukrainegate. Problems with this include: (1) the Democrats have not yet found a weaker candidate than Biden, (2) it’s incredibly improbable that Biden would have lost the primaries because Ukraine announced an investigation of his alleged action on behalf of his son (in fact, Ukrainegate has informed many Democrats about the corrupt corporate board position and salary taken by Biden’s son, with no discernable result in the polls), (3) Trump has been beholden to governments and corporations and individuals, foreign and domestic, since day 1 as a result of his emoluments (and in a system of legalized bribery, beholdenness has long been the general rule), (4) the notion that nothing can be done after an election is a ridiculous thing to claim on the first page of a book about impeachment.

Katyal believes that “the legitimacy of our republic” has been threatened for the first time by Ukrainegate, that “at the darkest moments” the U.S. public and government rise above partisanship, and that the acquittal of Andrew Johnson was purely a matter of integrity (with no mention of the likely bribes involved). Should we take seriously the argument for Ukrainegate made by someone painting pastel watercolors with tinted horseshit? We don’t have time, and I don’t have the cruelty toward you, dear reader, to wade through every page of this book. But here are a few lowlights:

Katyal offers (page 27) as a quintessential example of an impeachable offense, not any of the thousands of actual ones that presidents have committed, but the dystopian horror fantasy in which Trump refuses to join in a war required by NATO or — wait for it, don’t look away — Trump refuses to “take action” in response to an imminent nuclear attack.

Katyal presents (page 44) the usual story of “Russian aggression” in Ukraine with zero mention of the coup or of the vote taken by the Crimean public. Katyal presents so-called “aid” to Ukraine in the form of billions of dollars worth of free weapons as necessary and desirable for a war against Russia and “Russian aggression.” There is of course zero mention of Obama’s refusal ever to provide those weapons, much less comparison of that policy with Trump’s delaying of a batch of murderous supplies.

Katyal claims (page 78) that Russia already held the power over the U.S. government that Ukraine would have acquired if it had met Trump’s demand. That U.S. policies have dramatically opposed Russian wishes throughout the Trump years goes unmentioned, of course. We are not told that Trump has sanctioned Russians, evicted Russians, opposed Russian economic deals in Europe, shipped weapons to nations on Russia’s border, engaged in massive war rehearsals in nations on Russia’s border, bombed Russian troops in Syria, rejected Russian plans to maintain the Iran agreement or ban weapons in space or ban cyberwar or keep the INF Treaty, badgered Europe into building bigger militaries, etc.

Katyal claims (page 79) that the Russian government stole and leaked John Podesta’s emails (a claim that’s never been proven), and (page 81) that the Russian government “penetrated the electronic voting systems of many states” (a claim refuted by the governments of the various states). Katyal doesn’t bother to offer evidence. Why should he? If you do a web search on these topics, you’ll find virtually nothing but articles promoting these false claims — a problem nobody seems to be confronting the search engines over. You’ll have to search hard to find debunkings like this.

Who Will Tell the Truth About the So-Called ‘Free Press’?

The Ukrainegate impeachment is the most partisan, unprincipled impeachment yet, despite the actual truth and seriousness in the accusation. It sets a precedent that a long list of horrendous abuses are unimpeachable, even unmentionable. It promotes militarism and Russophobia and the conception of deadly weapons as “aid.” It avoids conviction and removal. It avoids urgency. It avoids actual seriousness. And it promotes the weakest possible Democratic nominee for president. If you want a guide to how not to do impeachment, get Katyal’s book.

This article was originally published at DavidSwanson.org on December 1, 2019.