Why War Deaths Increase After Wars 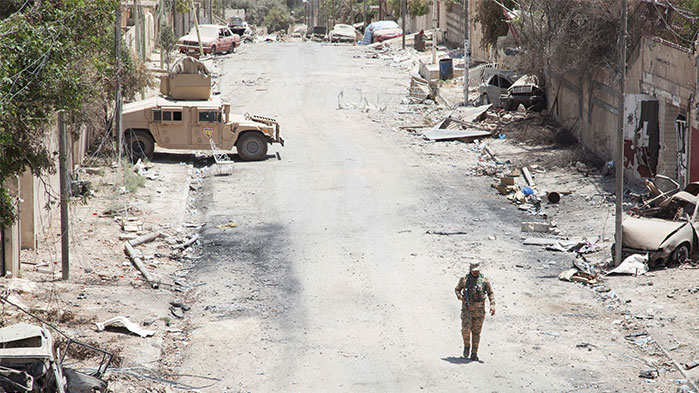 It would be more difficult for the US government to continually wage senseless wars if the estimated millions of dead received more attention.

I don’t know if somebody dumped a bottle of sanity solution into Rhode Island Sound or what the reason is, but Brown University, which has military contracts just like everywhere else, is the headquarters of a group of dozens of scholars and experts working to educate the public about the various costs of wars (funders worth thanking are here). If every educational institution in the United States did even a teeny bit of what this group does, I think there’s a chance that “peace on earth” might become a phrase with actual meaning, understood as something that might actually be created.

One of the latest resources produced by people affiliated with the Costs of War Project is a book called War and Health: The Medical Consequences of the Wars in Iraq and Afghanistan, edited by Catherine Lutz and Andrea Mazzarino. Its focus is on “indirect” deaths caused, at least in large part, by wars.

Some tiny percentage of people in the United States have some familiarity with studies of deaths in Iraq directly caused by war violence beginning in 2003. As I noted in 2013, the Cost of War Project almost certainly radically understates those deaths. Even though the most respected studies put the count at over a million as of a decade or more back, the Cost of War Project to this day, puts it at 184,000 to 207,000 civilians, plus 35,000 to 40,000 fighters, and 48,000 to 52,000 Iraqi military and police.

Brown professor Neta Crawford explained years ago that she was choosing not to use the Johns Hopkins (a.k.a. Lancet) studies or the Opinion Research Bureau study because they had not been updated and had been criticized. She chose instead to use Iraq Body Count (IBC), even while quoting an MIT professor pointing out that IBC admits its tally is probably half the size of actual deaths. What IBC means is that it is aware it is missing huge numbers of deaths; it has no basis for knowing how many. But it hasn’t been criticized, except by serious scholars, presumably because those with the ability to criticize things in the U.S. corporate media do not want to criticize an estimate of deaths that’s 10 or 20 percent what serious studies estimate.

So, taking with a grain of salt, the estimates of local deaths used, it is still useful to look at the Cost of War Project’s total estimate for directly caused deaths of both local people and U.S. and allied military members in Iraq, Afghanistan, Pakistan, Syria, and Yemen combined: 770,000 to 801,000. Wars that are supported by 16 percent of the U.S. public, that have increased global terrorism, that have proliferated deadly weapons, that have brutalized U.S. society, that have fueled racism and xenophobia, that have militarized police, that have drained resources from everything good and decent in the world with a military budget now at $1.25 trillion per year (tiny fractions of which could transform the world for the better), that have devastated the natural environment and climate of the earth, that have eroded civil liberties in the name of freedom, that have developed dangerous new technologies and habits like drone murders, that have normalized torture, that have contributed to putting an outright fascist in the White House — that these wars have directly and violently killed some 800,000 people, and probably dramatically more than that, ought to be known. How can anyone weigh the downsides of wars against the disastrous sides of wars, and decide whether they’re worth it, in the absence of basic facts?

But, here’s the key lesson from the new book edited by Lutz and Mazzarino: the direct deaths are small in comparison with the indirect. One chapter in the book, authored by Scott Harding and Kathryn Libal, does note some of the studies of direct deaths that place the count much higher than does Iraq Body Count, and also notes that, using World Health Organization statistics, life expectancy in Iraq has fallen significantly. Why? Well, Lutz and Mazzarino estimate that to 480,000 direct deaths in Afghanistan, Iraq, and Pakistan, one must add at lease 1 million deaths in those countries indirectly caused by the recent and ongoing wars. This is because the wars have caused illnesses, injuries, malnutrition, homelessness, poverty, lack of social support, lack of healthcare, trauma, depression, suicide, refugee crises, disease epidemics, the poisoning of the environment, and the spread of small-scale violence.

In the First Gulf War, the authors estimate that deaths caused by the U.S. and allies’ destruction of Baghdad’s electrical system caused 30 times the deaths caused directly by the war’s violence.

In a chapter on Pakistan, we learn how people being constantly threatened with U.S. drone attacks are not only traumatized but also come to distrust Western vaccination programs aimed at eradicating polio, and how the CIA’s phony vaccination program aimed at locating and murdering Osama Bin Laden exacerbated this problem. Interestingly, there is far more outside funding, including from Bill Gates and the Rotary Club, for ending polio than for other health needs, perhaps in part because polio has been ended on most of the planet, and ending it in Afghanistan and Pakistan would mean that Western countries could stop worrying about it altogether. But the lessons conveyed in this book make clear that if Bill Gates wanted to end polio he would start funding the peace movement, because the wars keep polio alive.

The authors of the chapter on polio, Svea Closser and Noah Coburn, note that “Widely publicized accounts of [the phony vaccination program aimed at finding Bin Laden] made fears that vaccination campaigns were actually in service to U.S. military surveillance seem more plausible.” I would add: and be more plausible, not just seem it.

Tragically, as Closser and Coburn recount, nearly everyone working to eradicate polio opposes drone strikes, but just those people have become prominent targets as representatives of the West responsible for the drone wars. Dozens of healthcare workers have been murdered in Pakistan for trying to do good where the governments of the nations they happened to be born in were doing so much evil.

The propaganda for the war on Afghanistan has often involved women’s rights, yet the principle victims of many of the deadly crises created by war have been women, who have been victimized by the lack of healthcare, fear of traveling to hospitals, at-home births, sexual violence, rape, HIV/AIDS, cervical cancer, and the use of heroin as a substitute for medicine. While some progress has been made in Afghanistan, it remains one of the worst and deadliest places on earth to become pregnant.

A woman in Afghanistan whose story is told in this book lost her son to a bomb blast that her husband survived. The husband turned to heroin until he died. Now the woman has herself begun using heroin. Is she a war victim? Many might not say so. But few would claim, at least without thousands of miles separation, that the war had brought her new rights and freedoms.

These wars have caused the flight and the murder of health professionals, and have made education difficult to impossible in various areas. The wars have poisoned air, land, and water, and spread chemical weapons, napalm, and depleted uranium. The results have included skyrocketing rates of cancer, and genetic damage. Cluster bombs have blown off limbs and will continue doing so long after official “endings” of wars or even any actual endings of them. Bases and their burn pits and deadly chemicals have spread death more quietly but just as disastrously as, if not far more so than, bombings.

Lutz and Mazzarino address the ways in which U.S. academics often write about these impacts of war: “When governments and military institutions rely upon and send human beings to engage in acts of war that are otherwise illegitimate and immoral, they treat the resulting problem as one of psychological maladjustment requiring health institutions’ intervention. . . . Is a condition like PTSD a disease, or is it simply a normal human reaction to the violence of war, as both observed and perpetrated?” To this I would add: when authors insert the word “otherwise” into a sentence that has no need of it, they can be understood to be suggesting that immoral behavior can become “legitimate” by being part of a war.

Lutz and Mazzarino also criticize the U.S. government’s failure to track or at least publish data on the full damage of its wars. But “what is to be done?” That’s a subheading in the book, and it’s followed by advice for healthcare professionals, and by the admonition to “question” “particular wars.” But are we in some sort of doubt about them that we must “question” them? And how are we to know which “particular wars”? Are we to imagine that, due to some unmentioned considerations, some of the wars should be “questioned” and not others, or can we “question” all of them?

One thing the book wants us to question is the $5.9 trillion supposedly spent on recent wars. I do question it. I think every such reduction of military spending to some fraction supposedly spent on wars elides the fact that the whole military budget of $1.25 trillion a year is spent on nothing other than wars and preparations for more wars, nothing else, nothing normal, nothing routine, nothing beyond mention or reproach.

But here’s why Lutz and Mazzarino want the indirect deadly impacts of wars to be understood. Read this carefully and spread the word: “[W]ars would be more difficult to prosecute if, from the outset, the thousands or even millions of dead or injured bodies were emphasized. . . . To examine war and its effects on human health, we need to first navigate around this tendency to ignore the bodies damaged by war, and the push by governments for publics to instead focus on the love between military ‘brothers,’ on the beautiful spectacle of war pyrotechnics, on the religious or secular sentiments of nationalist pride at the protecting army, or the fear and anger at the threat of harm from others.”

Later, Lutz and Mazzarino, use a rare and admirable phrase: “all wars,” in remarking: “[W]e hope to prompt readers to think further and more globally about the health consequences of all wars, and to take real steps to alleviate those consequences or, more pressingly, prevent new ones.”

The book is divided into sections examining the health effects of recent wars on Afghans, Iraqis, and members of the U.S. military. There is important information here on the spread of cancers in Iraq, and also on the increase in suicide that results from joining the U.S. military — something recently falsely denied by the New York Times, though immediately corrected by Matt Hoh.

I would love to see a widespread awareness of the devastating indirect consequences of war.

After that, I would long for some public understanding of the even larger lost opportunities and trade offs, the good that could have been done and the lives saved and the lives dramatically improved by redirecting a small fraction of military spending to good purposes.

This article was originally published at WorldBeyondWar.org on November 13, 2019.