Another Armistice Day with No Trump Weapons Parade 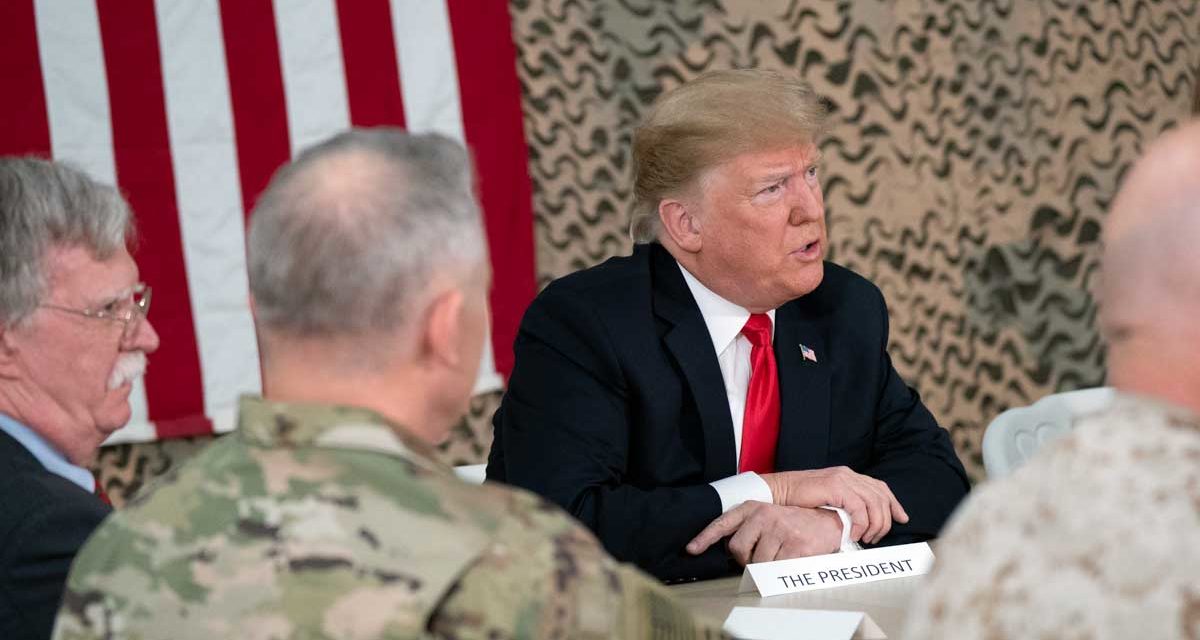 US President Donald Trump at a military briefing at the Al-Asad Airbase in Iraq on December 26, 2018. (Shealah Craighead/White House/Public Domain)

The madness of the normal way of doing things urgently needs exposure, including the madness of imagining that sometimes in some places war can be rational.

For decades in the United States, as elsewhere, Armistice Day (in some countries it’s called Remembrance Day) was a holiday of peace, of sad remembrance and the joyful ending of war, and of a commitment to preventing war in the future. The holiday’s name was changed in the United States after the U.S. war on Korea to “Veterans Day,” a largely pro-war holiday on which some U.S. cities forbid Veterans For Peace groups from marching in their parades because only Veterans for war can be part of Veterans Day.

Last year we raised quite a fuss in opposition to a weapons parade through Washington, D.C. that Trump had proposed to hold in his own honor. It wasn’t held. Nor was it held on July 4th, as he later suggested. Nor is it being held now.

Yet it’s still a victory of appearances. It still suggests that shame is possible. That’s not nothing.

But appearances can be deceiving beyond a simple matter of focusing or avoiding attention. Trump has inherited and continued and escalated numerous wars, while the corporate media writes about his “opposition” to those very wars on a regular basis.

Trump displayed his opposition to wars this week by proposing a new war in Mexico, to which the President of Mexico replied with a denunciation of the very idea of war as irrational, and proceeded to arrest a suspect in the crime that was Trump’s casus belli without so much as launching a single missile into a wedding party or grain harvest.

A month and a day after this Armistice Day, the UK may elect a Prime Minister who will come closer to articulating and acting on the wisdom of the President of Mexico than any leader of a permanent member of the UN Security Council since its creation. The “special relationship” between the U.S. and British governments may rapidly evolve from that between a drunk maniac with a leash and a poodle to that between a drunk maniac and a concerned neighbor.

Sadly, what the world needs is a large gathering of desperately concerned neighbors. The risk of nuclear apocalypse, like that of climate apocalypse, has never been higher. The madness of the normal way of doing things urgently needs exposure. That includes the madness of imagining that sometimes in some places war can be rational.

Henry Nicholas John Gunther had been born in Baltimore, Maryland, to parents who had immigrated from Germany. In September 1917 he had been drafted to help kill Germans. When he had written home from Europe to describe how horrible the war was and to encourage others to avoid being drafted, he had been demoted (and his letter censored).

After that, he had told his buddies that he would prove himself. As the deadline of 11:00 a.m. approached on that final day in November, Henry got up, against orders, and bravely charged with his bayonet toward two German machine guns. The Germans were aware of the Armistice and tried to wave him off. He kept approaching and shooting. When he got close, a short burst of machine gun fire ended his life at 10:59 a.m.

Henry was the last of the 11,000 men to be killed or wounded between the signing of the Armistice six hours earlier and its taking effect. Henry Gunther was given his rank back, but not his life.

A great time to begin turning things around is Armistice Day! And some people are getting active.

Sign up for any event on the world map here, or add a new one.

One activity for 11 a.m. wherever you are, or some other appropriate time, is bell ringing. Here’s a kit from a Veterans For Peace chapter on a past Armistice Day.

Get and wear white poppies.

Tell the Truth: Veterans Day Is A National Day of Lying

An Armistice Day Newspaper from Veterans For Peace

We Need a New Armistice Day

A Hundred Years After the Armistice

About the Trump Weapons Parade We Helped Prevent in 2018:

Marches on Washington to End the Wars

About the militarization of societies, police, and schools:

JROTC, Military Indoctrination and the Training of Mass Killers

Inside the U.S. Military Recruitment Program That Trained Nikolas Cruz to Be “A Very Good Shot”

Florida Gunman Nikolas Cruz Knew How to Use a Gun, Thanks to the NRA and the U.S. Army

The Tide it is a Changin’

This article was originally published at DavidSwanson.org on November 7, 2019.