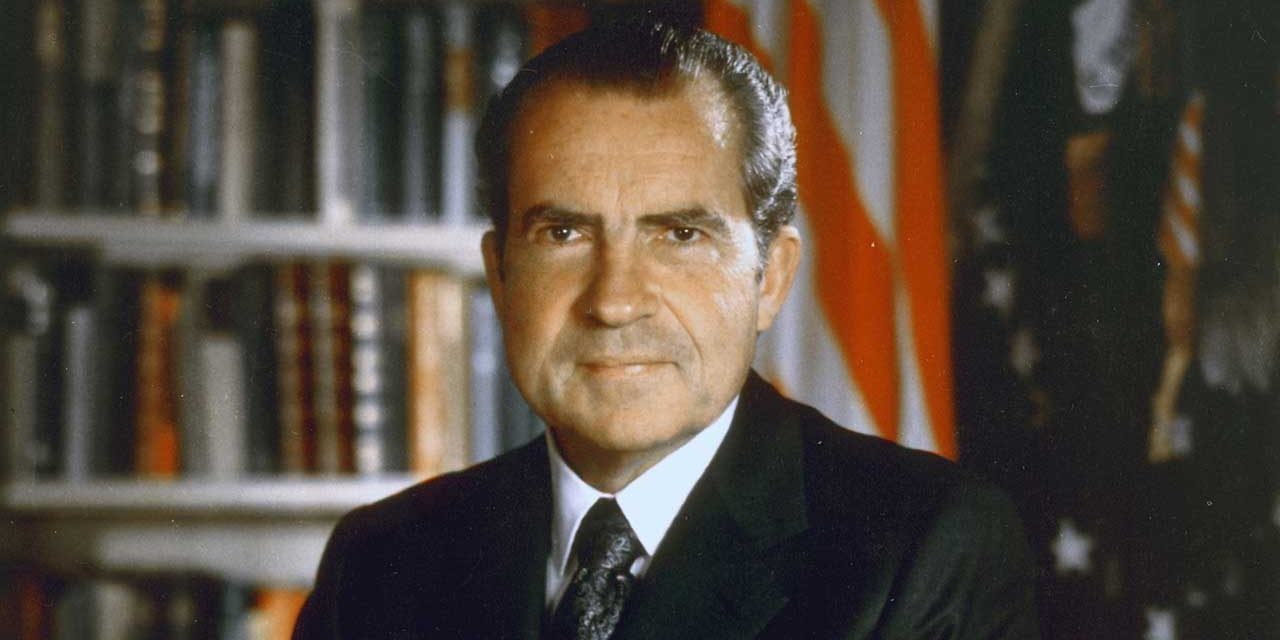 Richard Nixon is mostly remembered for Watergate, but he also established environmental protections that are being rolled back by the Trump administration.

Two days ago I wrote about how our allegedly full employment economy’s need for jobs had caused the Trump regime to overule the Environmental Protection Agency (EPA) and permit extractive companies to destroy protected lands. Today our subject thanks to Stephen Lendman is the Trump regime’s destruction of the Endangered Species Act (ESA).

The Endnagered Species Act and the Clean Water Act serve as backups for the protection of lands by the Environmental Protection Act as these protected lands often contain water resources and endangered species. The brutal assault on the environment by extractive industries endangers protected waters and species. Thus, to proceed with the Pebble mining project in the sensitive Bristol Bay area of Alaska also requires setting aside the ESA as protected bald eagles, grizzly bears, and wolves are in the affected area. EPA scientists are convinced that the project will cause “complete loss of fish habitat” in one of the world’s most valuable wild salmon fisheries and add salmon to the list of endangered species.

For capitalists, the environment is something to be looted. Thus as the gangster Brazilian government destroys the Amazon rain forest, the American gangsters destroy Bristol Bay.

Environmental looting is very profitable, because the costs are largely external and are imposed on those who have no claim to the profits. The ridiculous and incompetent way in which Gross Domestic Product (GDP) is measured results in the destruction of the Amazon rain forest and Alaska’s Bristol Bay being recorded as an increase in GDP and wellbeing of Brazilians and Americans. The faulty measures of economists contribute to the destruction of life on earth.

It remains to be seen if private environmental organizations — support them — and federal courts can block the Trump regime’s assault on federal laws passed in the 1970s. To be fair to Trump, the first major assault on ecological laws was launched by vice president Dick Cheney in the George W. Bush regime. Cheney put extractive industry lobbyists and polluters in charge of the federal agencies tasked with protecting the environment and threatened species. Trump is simply carrying on a tradition established by Cheney—one that the corrupt Democrats and Republicans in Congress went along with by confirming the industry lobbyists in office and by failing to curtail the Cheney appointees who turned their backs on their statutory responsibilities.

The United States is such a screwed-up place that the presidents who have done us the most good are the ones most demonized. The most demonized of all is Richard Nixon. Americans who were not even born during his time are taught in school to hate him. Watergate and all that. My readers are the most clued-in people that exist. How many of you know that Nixon is responsible for all of our environmental protective legislation: The National Environmental Policy Act, the Environmental Protection Agency, the National Oceanic and Atmospheric Administration (NOAA), the Clean Air Act, Earth Week, the Clean Water Act, and the Endangered Species Act?

These are all Nixon’s accomplishments. Yet, few, if any, of those rising to their defense know that they are defending the achievements of President Richard Nixon.

How can this be? The answer is “Watergate.” Today no one not attentive and mature at the time has any idea what Watergate was about. It is simply something used to demonize Nixon and to paint him as evil and a threat to democracy.

Let me tell you what Watergate was about. President Nixon was the most knowledgeable president about foreign affairs that the US has ever had. I never worked for Nixon or had anything to do with his government, but Pat Buchanan did. He can tell you how Nixon worked to find solutions and to improve prospects for mankind. Nixon travelled widely and met and established relations with leaders of the countries of the world. He understood, unlike the neoconservatives who have dominated US foreign policy since Clinton, that the conflict between the nuclear powers had to be resolved or the world would come to an end.

Nixon initiated the arms control treaties with the Soviet Union and he opened to China. Because of the anti-communist conservatives, Nixon had to represent his opening to China as an opening of a wedge between the Soviet Union and China. The US military/security complex saw these openings to be the beginning of a process that would end the very profitable Cold War. President John F. Kennedy had been officially assassinated, because he worked to defuse rather than intensify tensions with the Soviet Union as the Joint Chiefs and CIA demanded. The coverup report by the Warren Commission had been so badly damaged by the known factual evidence that it was not possible to follow up Kennedy’s assassination with Nixon’s. The CIA decided to assassinate Nixon politically using its asset the Washington Post.

The first thing I was told in the 1970s as a holder of high security clearances as staff associate of the House Defense Appropriations Subcommittee was that the Washington Post was a CIA asset. You could tell what the CIA was up to by the Washington Post’s stories. Everyone knew that.

“Watergate” was a burglary of an office in the Watergate, buildings consisting of condos, hotel, and offices by the Kennedy Center on the Potomac in DC. No one even today knows what the burglary was about. One claim is that operatives working for Nixon’s re-election thought that they would find evidence in a Democratic Party Watergate office of communist money funding the Democrats. G. Gordon Liddy, one of the Watergate burglars, told me that they were looking for a call girl list in the Democratic office that had listed among the available sex workers the wife of a legal adviser to President Nixon. The highly placed legal advisor wanted the black book recovered and destroyed in order to protect his wife and his job. Various law suits erupted over Liddy’s claims, but if memory serves Liddy won or survived the suits. Liddy told me that the curious thing about the burglary is that some member of the team taped the locks open so that Watergate security would discover that someone was inside. Liddy did not know which member of the team set them up for discovery.

Nixon knew nothing about the burglary. When informed of the burglary, Nixon thought that if he initiated an investigation the Washington Post would twist it in some way to prevent his re-election. Nixon decided to ignore the incident until after his re-election. This was his mistake.

News of the burglary got out, and Nixon’s “crime” was not the burglary but misrepresenting the date when he learned of it. The Washington Post turned this into lying to Congress and the American people. Nixon realized that someone was out to get him, but apparently did not realize that it was the CIA. Consequently, he tried to use the CIA to stop the assault on his office when, in fact, the CIA was behind it.

The Washington Post reporters, Woodward and Bernstein, were fed disinformation, which they used to create in readers’ minds that something very sinister was going on, directed by Nixon. I remember reading their almost daily accounts. There was never anything in their reports except ominous meetings with “deep throat” in dark and deserted underground parking garages at midnight that radiated danger. The effect of their stories was to cover Nixon in a cloak of evil who might do anything. Nixon had no answer to this kind of demonization. At least Trump had Twitter when the CIA and its media agents tried to bury him in the orchestrated hoax of “Russiagate.”

In the 1970s an erased 20 minute tape became evidence of Nixon’s guilt. Today Hilary Clinton can erase multiple gigabytes of information from computers and nothing happens. It all depends on who the military/security complex wants to get.

When President Reagan undertook to end the Cold War he also experienced resistance from the military/security complex. When President Trump announced that his aim was to restore normal relations with Russia, Russiagate landed on his head.

It was President Dwight D. Eisenhower, five-star general, commander-in-chief of allied forces against Germany, who warned us in 1961 to no avail about the US military/security complex:

“In the councils of government, we must guard against the acquisition of unwarranted influence, whether sought or unsought, by the military-industrial complex. The potential for the disastrous rise of misplaced power exists and will persist. We must never let the weight of this combination endanger our liberties or democratic processes. We should take nothing for granted. Only an alert and knowledgeable citizenry can compel the proper meshing of the huge industrial and military machinery of defense with our peaceful methods and goals, so that security and liberty may prosper together.”

Nixon is also hated by the liberal/progressive/left for the Vietnam War. For Nixon this was a war inherited from President Lyndon Johnson. President Kennedy intended to withdraw the small US force after his re-election. It was President Johnson who went along with the military/security complex and built up the war to prevent the falling of dominos. Nixon wanted out of the war, but could not be the first American president to accept defeat and walk away. The awful things that happened, including Cambodia and Laos, were desperate attempts to create conditions that would allow the US an “honorable” withdrawal. If you think it is easy to extricate the US from war, keep in mind that that was what Obama was going to do and what Trump was going to do, but the Bush regime wars continue.

Americans blame presidents for their own failings. Democracy requires an alert citizenry. Democracy fails when the citizens are insouciant. A country with an inattentive population and a media hijacked by interest groups cannot hold government or interest groups accountable.

Globalists who move America’s jobs offshore and neoconservatives who attempt to implement US hegemony have undone President Reagan’s accomplishments of restoring the economy and ending the Cold War. Now it is the environmental protections put in place by the Nixon administration that are being overthrown. With the Constitution overthrown by the “war on terror,” the outlook for Americans is dismal. Their insouciance has cost them their country.