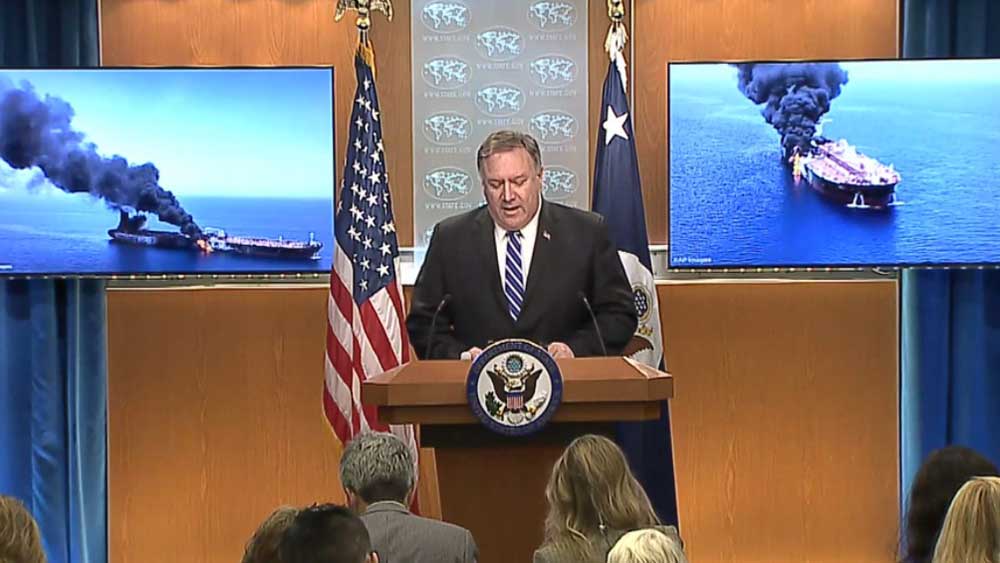 US Secretary of State Mike Pompeo on June 13, 2019, blamed Iran for attacks on ships in the Gulf of Oman. (State Department)

Iran had no motive for the recent attack on civilian vessels in the Gulf of Oman, but the US has motives to falsely blame Iran for it.

“I was the CIA director. We lied. We cheated. We Stole.”—Mike Pompeo

It appears that Mike Pompeo has a hard time kicking his old habits. He appears to be as smug about lying as a CIA operative as he is as Secretary of State. Categorically blaming the Iranians for the recent oil attack tankers has left allies scratching their heads; and perhaps leaving foes thinking: “Thank God my enemy is so stupid”!

On June 13, 2019, as Ayatollah Khamenei was holding talks in Tehran with Japanese prime minister, Shinzo Abe, two oil tankers carrying oil to Japan were attacked. As investigations into the incident were just beginning, Pompeo had already concluded his assessment and had it ready for the press. Much to the audible surprise of the world, and without any proof or supporting documents, he laid the blame firmly at Iran’s feet citing “intelligence”.

To his relief, in no time at all, US officials claimed that they had managed to get their hands on videos and pictures. They presented a grainy video alleging to show an Iranian navy boat removing mines from the damaged Japanese ship. It is easy to understand why the grainy video’s existence was necessary.

Precisely a month prior, on May 13, four oil tankers were damaged in the region.  The United States blamed Iran without any evidence. Saudi Arabia followed suit. The rest of the world was skeptical and doubts floated about the about the accuracy of US claims. This time around, Pompeo was saved by the video—although not for long! The Japanese vessel owner disputed the presence of mines damaging his vessel (as suggested in the blurry video).

Even allies were skeptical. To enforce its position and allegations against Iran, the Trump administration made its argument based on misinterpreting what Iran had said about the oil embargo.  Following Trump’s announcement on April 22 that America would not renew US waivers for countries which imported oil from Iran, in essence, imposing an oil embargo, on April 25, the Iranian government retorted by condemning America’s illegal demands and stated that no other country could take its share of the oil market.

The Trump team would like us to believe that what Iran meant was the sabotage of the oil tankers. This is far from true.  Iran was referring to its legal right under the 1982 United Nations Convention on the Law of the Sea (UNCLOS) which legally allows it to impede the passage of oil shipments through its territorial waters—the Strait of Hormuz.

While UNCLOS stipulates that vessels can exercise the right of innocent passage, and coastal states should not impede their passage, under the UNCLOS framework, a coastal state [Iran] can block ships from entering its territorial waters if the passage of the ships harms “peace, good order or security” of said state, as the passage of such ships would no longer be deemed “innocent”.[1]

Given Iran’s recourse to international law, American diplomacy at its all-time low, and the rally behind Iran—if only verbally—it makes absolutely no sense for Iran to blow up oil tankers and turn the world opinion in favor of Trump and his the warmongering advisors: Pompeo and Bolton.

But tankers were attacked.  What other motivations were there?

Perhaps NOPEC—No to Oil Producing and Exporting Cartels Act.  In February, the House passed a Bill that would cripple OPEC.  The Bill would prohibit OPEC from coordinating production and influencing prices. While the Bill was said to provide a useful leverage for the White House, Persian Gulf Arab states sent their warnings to Wall Street.

On April 5, Saudi Arabia even threatened to drop the US dollar for oil trades in order to discourage US from passing the NOPEC Bill. The Saudi threat came on the heels of UAE cautions the prior month that if such bill passed, it would in effect, break up OPEC.

Perhaps this was the reason behind Saudi Arabia’s lack of cooperation.  After Trump announced his Iran oil embargo, a senior US administration assured the world at large that Trump was confident Saudi Arabia and the United Arab Emirates would fill any gap left in the oil market. He was mistaken. On April 29, the Saudi Energy Minister, Khaled el-Falih made it clear that Saudi Arabia would not “rush to boost oil supply to make up for a loss of Iranian crude”.

After the May 13 incident, apparently America’s accusations did not carry any weight around the world, but they did have an impact on the jittery Saudis.  On June 3, Bloomberg reported that over the last month, the Saudis raised their oil production to replace lost Iranian oil.  The oil market was satisfied and America could continue to put pressure on friend and foe to stop buying Iranian oil—there would be no shortages.

What then explains the second tanker incidents of June 13?

Perhaps the motive is two-fold. Firstly, the United States would reinforce its unfounded allegations that Iran is a ‘bad actor’ and discourage and dissuade the international community from cooperation with Iran. And secondly, the hike in the price of oil as a result of the tanker attacks no doubt sent a sigh of relief to shale oil producers in the United States. A drop in oil prices would greatly harm or bankrupt US shale-focused, debt-dependent producers.

Not on Trump’s watch.

Although many states in the US and some countries in the world have banned shale oil production due to its adverse effects on the environment, specifically water, the United States’ goal is to be the biggest producer and supplier of oil depending on its shale oil production. Currently, according to the latest US Energy Information Administration (EIA), the United States is a net importer of oil.  With low oil prices, a halt or slowing of shale, the trend would continue to be an importer.

Having Saudi Arabia cower to US demands, demonizing Iran, intimidating allies and non-allies with fear of conflict in the region in order to press further demands on Iran, increase in the price of oil, and the weapons that would be purchased by US allies in the nervous neighborhood, seems like a win-win situation for America. For now.