Tashkent, Uzbekistan: The City with 2200+ Years of Written History 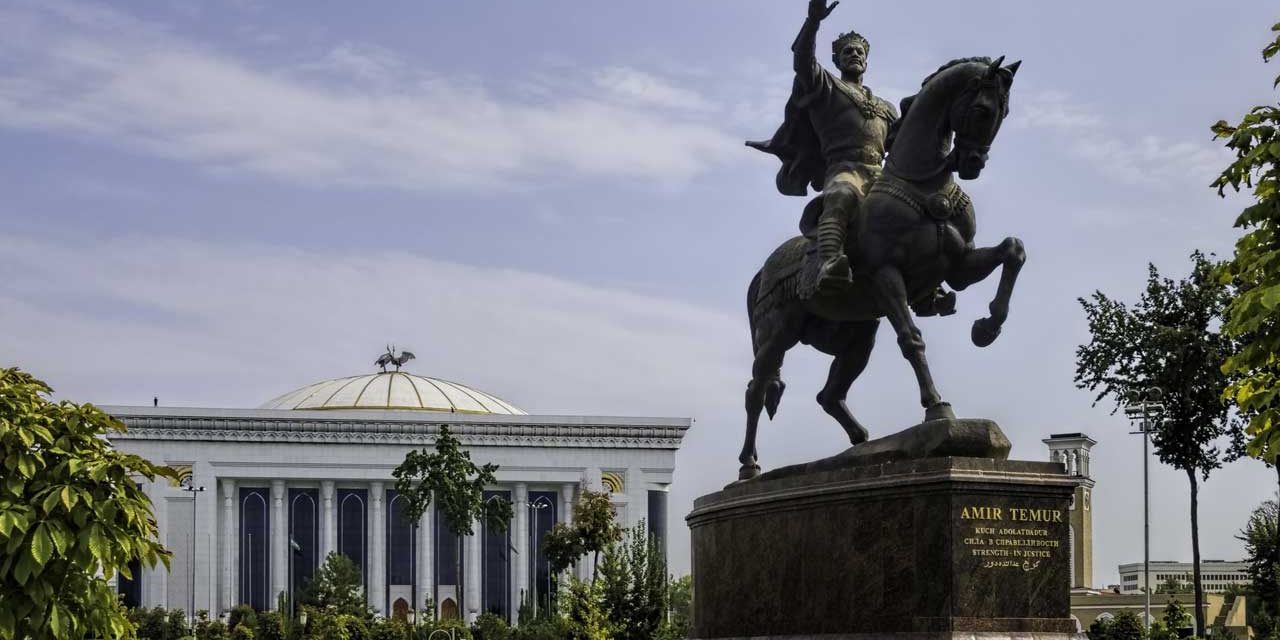 A 1993 statue of Tamerlane (Timur the Lame; 1336-1405) along with his words “Strength in Justice” (in several languages) stands in the square now named after him in the center of Tashkent. [Dan Lundberg/CC BY-SA 2.0]

Visiting Tashkent was a unique and memorable experience.

Visiting Central Asia had been on my bucket list for quite a while. So when I finally got the chance to head to Kazakhstan, I decided to take a pit-stop on my way there. This is how I arrived at Tashkent, the capital city of Uzbekistan and also the most populous city in former-Soviet Central Asia.

So what was Tashkent like? Considering the fact that it is a popular tourist destination, both from scenic and historical points of view, a lot has already been written about its various monuments and attractions. As such, I’d rather stick to my own observations about the city in this travelogue.

Uzbeks, in general, are very helpful people. They’d go out of the way to help you with directions, advice and anything else that you might ask for. Ask any passerby for a direction and chances are high that they won’t understand your language. But, they’d be quick to open up the translate app on their phone and ask you to speak to its voice input.

Compare this with the shrug and “I don’t know” behavior that’s the norm in many parts of the world. :)

“Welcome to Uzbekistan!” said the immigration guy as he stamped my passport. This was the first in a list of many “wait, what!” moments that I was soon to have there. Traveling in various countries, be it the Gulf, far-eastern Europe, or even India, I’ve never come across an immigration or passport control official who ‘welcomes’ visitors. Can’t blame them; customer satisfaction is not part of their job. But it was pleasantly surprising to hear that coming from an immigration official.

This was not a one-off incident though. On my way out of Tashkent, at the departures area, I accidentally dropped a small envelope from my laptop bag while checking-in for my flight. Over an hour later, when I was at the lounge, I found the check-in guy looking around for me—“Sir, you forgot this paper!”

Tashkent: The City and Tourism

During my visit, the Novruz decorations were still intact around Tashkent. Generally speaking, Tashkent is an oddly “green” city—keeping in mind it is the capital of the country and the seat of almost everything important over there, the number of trees is fairly high. It was easy for me to walk around the city and not feel tired, all thanks to the clean air and consistently pleasant April weather.

Tourism has a big role to play in the Uzbek economy. The country contains various historic sites and is the birthplace of Tamerlane as well as the first Mughal Emperor Babur. More importantly, Tashkent itself lies on the historic Silk Route.

All of this has prompted the government to focus heavily on tourism. There is an electronic visa system that works only for tourist visas. Plus, you can easily grab a “tourists’ flyer” from any hotel’s lounge in the city. Such flyers contain a good deal of info related to important places to visit, things to do, etc.

These flyers were identical across all of Tashkent. This made me curious, and yes, my guess was correct: the government has, by and large, attempted its best to streamline the tourism sector. Unlike Georgia, there are no unregulated drawing-room based hotels in Tashkent. There are a decent set of rules and regulations in place, with fairly stringent requirements for hotel and tour operators, including background checks and site visits.

Talk to any local, and they’d tell you that things were not the same half a decade ago. But over the course of the past few years, the Uzbek government has attempted to curb corruption and regulate virtually every aspect associated with the tourism industry. This has improved Uzbekistan’s reputation as a “safe tourist destination”. Back in the day, Uzbekistan used to be a closed enigma. Now, more and more tourists are flocking to Tashkent, Samarkand, Bukhara and elsewhere.

The Police and Security Checks

The abundant number of policemen on the streets of Tashkent is something that no visitor can fail to notice. Having read a large array of negative remarks about police in Central Asia, I had my apprehensions. However, the folks in uniform mostly keep to themselves and almost always greet you with a smile. Personally, my experience was the exact opposite of the online reviews—the locals did remark that problems arise when visitors take too many liberties (read: get drunk and forget their way back).

That said, there are innumerable security checks at every public place, such as airports and train stations. And they love stamping things! Successfully entered from Gate A? Stamp on paper! Went upstairs to the lounge? Stamp on paper!

Make sure you carry all the tickets and booking receipts in printed format. Repeat: keep everything on paper!

Picturize this: I dislike carrying papers, and keep everything on my phone. The guy at the security desk was all geared up with the stamp in his hand. He was expecting to be handed a paper that he can place the stamp on, but instead got the phone from me. He gave me the confused glare of the century.

Wanna Go Back in Time?

The infrastructure is well developed, albeit most of it is from the Soviet era. In fact, one would be hard pressed to find something that does not bear a mark of its Soviet legacy. For instance, I stayed at Wyndham Hotel Tashkent. A great hotel with friendly staff and really fast internet (oh, and terrific breakfast).

However, this particular Wyndham was nothing like the ones that you might find in Bahrain or UAE. There were no ergonomic adjustable chairs and no modern energy saving lamps. The furniture, though in perfect shape and squeaky clean, almost shouted at me, “I’m older than you!”

The table reminded me of my grandfather’s study table, and the wooden chair had a good deal of ornamental work. Let’s put it this way: if you were to remove the flatscreen TV, the room would absolutely belong to the set of a 1980s sitcom.

There is a high speed train that runs from Tashkent to Bukhara via Samarkand—Afrosiyab High Speed Rail (operating speed: 250 km/h). Since the number of tourists is fairly large almost all round the year, tickets are often sold out in advance.

With that said, there is one very visible problem that visitors might face in Tashkent. The country, by and large, is a predominantly cash economy. Virtually all transactions happen in cash, and it is not very easy to find an ATM either. More often than not, most of the roadside ATMs do not work.

I generally travel with a very negligible amount of cash, and rely heavily on cards. Naturally, I did not have enough cash to go by, and the ATMs around the city weren’t really in the mood to be of any help. Thankfully, Wyndham Tashkent had a working ATM that dispelled USD (not the local currency). So one can withdraw USD and convert it at an exchange for Uzbek Som.

So here is a pro-tip: if you’re ever visiting Tashkent anytime soon, make sure you carry a responsibly decent amount of cash. Perchance you find yourself running out of cash, try the ATMs at hotels or banks—those are more likely to be working.

Visiting Tashkent was a unique and memorable experience.

Even more unique was flying with Uzbekistan Airways, an airline that is a mixed bag of emotions. On one hand, their Business Lounge Wi-Fi refuses to work unless you provide a local Uzbek number for authentication (yes, good luck with your international roaming SIM card!). On the other hand, their airplanes are in good shape (read: brand new) and the flight experience is very pleasant.

Similarly, booking a ticket is a mess, with no web check-in, and no mobile-friendly website. But the billing and refund process is a breeze should you wish to cancel—they’d even refund 100% of the cost of some tickets. I can write on and on about Uzbekistan Airways, so perhaps this is something that deserves an article of its own for a later date.

It’s a pity I did not have time to visit Samarkand and Bukhara. Perhaps, some other time…