France and the EU, Recognizing Yet Supporting Apartheid Reality in Palestine 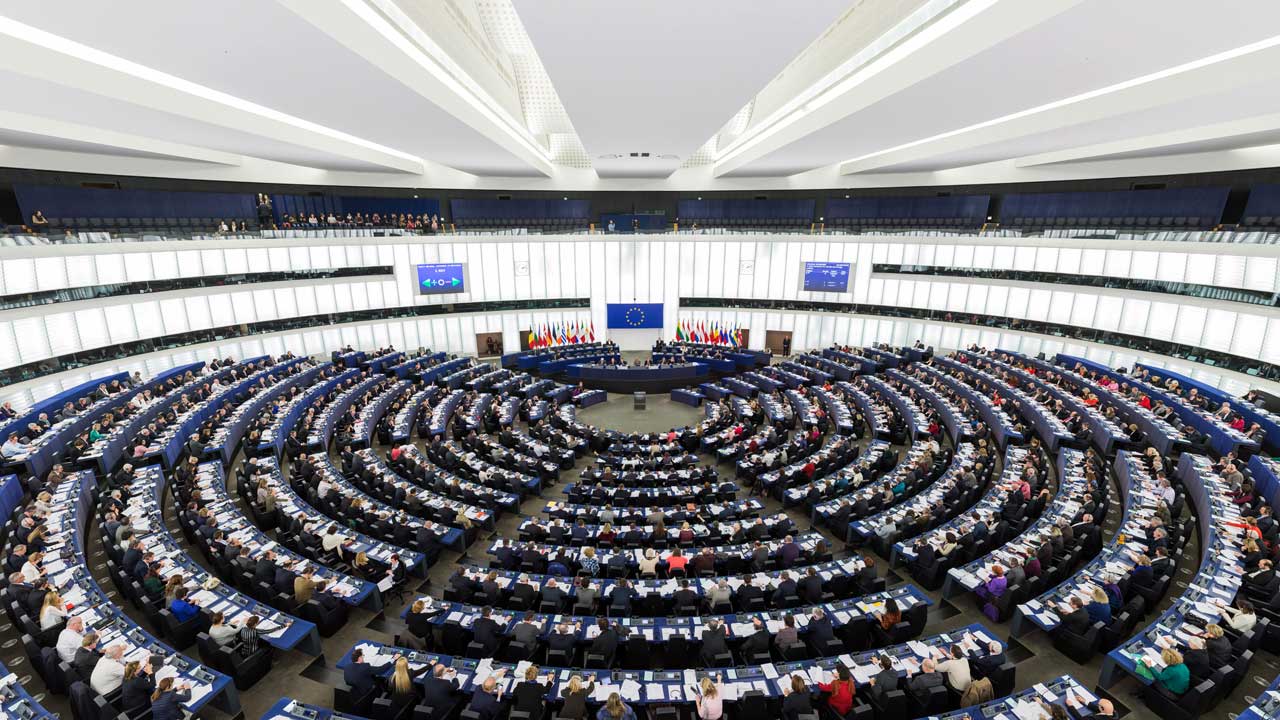 The Hemicycle of the European Parliament in Strasbourg during a plenary session in 2014 (Diliff/CC BY-SA 3.0)

While the US defies international law, the EU settles for mere words while in deeds helping to sustain a status quo that 's wrought misery for Palestinians.

A recent statement made by the outgoing French Ambassador to the US regarding the nature of Israeli apartheid accentuates a larger ailment that has afflicted European Union foreign policy: the EU is simply gutless when it comes to confronting Israel’s illegal occupation of Palestine.

Ambassador Gerard Araud was, of course, right when he told the US magazine, The Atlantic, that Israel is already an apartheid state.

Noting the “disproportion of power” between Israel and the Palestinians, Araud said, “The strongest (meaning Israel) may conclude that they have no interest to make concessions.”

And since Israel “won’t make (Palestinians) citizens of Israel … they will have to make it official, which we know the situation, which is apartheid.” Araud added, “There will be officially an apartheid state. They are in fact already.”

The fact that Araud has only divulged such obvious truths at the end of his five-year diplomatic assignment is expressive of the nature of politics, in general, and European politics, in particular.

The unpleasant truth is that the EU has served as an American lackey in the Middle East and has consistently operated within Washington’s acceptable margins. EU diplomacy rarely ventures away from this maxim. The fact that Araud dared to speak out is the exception, not the rule.

But Araud’s revelations are unlikely to translate into anything substantive. Moreover, they will not inspire a serious rethink in the EU’s position regarding the Israeli occupation or the US’ blind support for Israeli Prime Minister Benjamin Netanyahu’s militant and racist policies towards the Palestinians.

Some had hoped that the advent of an erratic and abrasive president in the White House could jolt the Europeans into action. They were encouraged by the January 2017 Paris Middle East summit that took place, despite American protests.

More than 70 countries added their voices to that of their French host, declaring their opposition to the illegal Jewish settlements and calling for the establishment of an independent Palestinian state as “the only way” to achieving peace.

The summit’s final statement urged Israel and the Palestinians to “officially restate their commitment to the two-state solution.” Then-French President, François Hollande, explained that his country’s motive was to merely ensure the ‘two-state solution’ is the frame of reference for future negotiations.

But what good did that do? Israel and the US ignored the summit as if it never took place. Tel Aviv continued to pursue its Apartheid policies, crowning these efforts with the Nation-state Law in July, which declared Israel as “the nation-state of the Jewish people”.

Trump, too, ignored the French and the EU altogether. On December 15, 2016, he selected an ardent Israeli supporter, David Friedman, to be his Ambassador to Israel. Friedman opposes the two-state solution and still refers to the Occupied Palestinian Territories in some ancient biblical designations, Judea and Samaria.

Nor did Trump consider the French position when he moved his country’s embassy from Tel Aviv to Jerusalem last May.

How did the EU respond to the concrete, albeit illegal, American actions? With more redundant statements that merely emphasized its political position but lacked any mechanism for serious action.

Last December, eight EU ambassadors, including that of France, issued a statement at the UN that was clearly aimed at the US. “We, the European Union members of the (UN Security) Council, would like to reiterate once more and emphasize the EU’s strong continued commitment to the internationally agreed parameters for a just and lasting peace in the Middle East, based on international law, relevant UN resolutions and previous agreements,” the statement read, in part.

Again, words and no action. The same pattern was repeated after Trump took it upon himself to grant the Occupied Syrian Golan Heights to Israel, defying the UN, the EU and, needless to say, the aspirations of millions of Arabs.

The EU foreign policy chief, Federica Mogherini, countered with another statement, on behalf of 28 EU states that Europe “does not recognize Israeli sovereignty over the occupied Golan Heights.”

So what? While the US defies international law with concrete steps, the EU settles for mere words, emphasizing a status quo that, even when it was embraced by Washington itself, wrought nothing but misery for Palestinians.

EU ineptness is only matched by its hypocrisy. Israel still enjoys advantageous trade privileges with Europe, and diplomatic ties between Israel and most EU member countries are at an all times high.

The only collective European initiative that seemed to matter at the time was in 2013, when the EU requested that Israeli products made in illegal Jewish settlements be labeled as such. After years of haggling, the EU admitted that monitoring Israeli trade practices as far as labeling is concerned has proven “impossible”.

The French position on trade with the illegal settlements was particularly disgraceful. While the Irish Senate had voted on December 5 to end the import of settlement-produced goods, in October 2018 the French did the exact opposite by suspending the special labeling rules.

In truth, the ineffectiveness of EU policies is nothing new, nor can it be blamed on Trump’s unilateral measures, either. In fact, the words of French Ambassador Araud are consistent with the frustration felt by other EU diplomats throughout the years.

In February 2013, a report issued by EU diplomats described illegal Jewish settlements as “the biggest single threat to the two-state solution”, calling on Brussels to take decisive measures to stop Israel’s “deliberate and provocative” settlement enterprise.

It has been over six years since the report was issued. The EU did nothing to stop the illegal settlements, which have grown in leaps and bounds since then.

Worse, in the latest elections won by Netanyahu, he promised to annex the illegal Jewish settlements into Israel.

Considering the unconditional American support regarding Israel’s previous illegal annexations of Jerusalem and the Golan, this, too, could be a tangible reality in the near future. After all, the Jewish Nation-state law recognized Jewish settlements as “national value” and the state “will labor to encourage and promote (their) establishment and development.”

In the face of the US backing of Israel, EU foreign policy is inconsistent, weak and, ultimately, a failure. Alas, the idea which gained momentum during the early months of Trump’s presidency that the EU can develop a truly independent foreign policy position on Israel and Palestine has proven wrong.

To change all of that, EU members should heed the words of the French Ambassador, recognize the apartheid reality in Palestine and act against it as forcefully as the world acted against South African apartheid, which led to its final, irreversible collapse in 1994.