As US-Sino trade talks will give way to next trade wars, new tariff wars will not resolve US deficits but will further impair global economic prospects.

Ever since the US-Sino trade talks began almost four months ago, the United States has pushed for a broad commitment focusing on China’s economic practices, including participation of U.S. firms in certain industries and protection of U.S. intellectual property rights (IPRs).

In a recent CNBC interview, Treasury Secretary Steven Mnuchin claimed that the countries had “pretty much agreed” on an enforcement mechanism for a trade deal. After his meeting with the Chinese delegation last week, President Trump stated that negotiators may need four more weeks to package the deal.

But the enthusiasm may prove premature.

The state of US-Sino trade talks

As the last globalist in the Trump administration, Mnuchin’s views carry some weight, but he lacks clout to enforce those views. That’s been the case since Gary Cohn, Mnuchin’s former Goldman Sachs colleague, resigned from the White House ahead of the tariff wars. In turn, Commerce Secretary Wilbur Ross has proven too weak, reluctant and old (81 years) to press for compromise.

That’s why trade talks are led by Peter Navarro, Director of National Trade Council, and Robert Lighthizer, U.S. Trade Representative. The former is an advocate of trade mercantilism, who has a dark track record in China-bashing; the latter’s trade wars began against Japan in the Reagan administration.

In addition to enforcement mechanisms, the two are pressing for a pact that would allow US tariffs on Chinese goods to snap back in case of violations—but without permitting China to retaliate in response.

Understandably, Chinese negotiators consider such conditions unacceptable. Such conditionality has surprised even Craig Allen, President of US-China Business Council, who believes that Mnuchin may have been too optimistic about the deal, if it is burdened by a conditionality clause.

Indeed, US business groups tend to focus on commitments, including the proposed “enforcement offices.” They dislike negotiating tactics that needlessly prolong the talks and may undermine the progress achieved.

Chinese Vice-Premier Liu He has expressed greater caution by stressing that, by the end the proposed four weeks, the two countries may learn whether a trade deal could be reached. And even if a final deal is achieved, it will take another year or two to verify the structural changes associated with the pact.

However, a US-China deal will not resolve US trade deficits, which have increased for half a century. The imbalances began in the postwar era after the recovery of the key EU economies—UK, Germany, France and Italy—and the subsequent rise of Japan. Toward the late 20th century, the deficits reflected the emergence of the four dragons; i.e., Taiwan, South Korea, Hong Kong and Singapore. China’s role in these deficits became prominent in the 2000s.

Last year, Mexico and Canada were pressured to a revised “US first” regional pact. Friction has been steadily rising with Japan and Germany. And Trump has pledged to extend the trade war to ASEAN—where the deficits are likely to climb if US companies begin to relocate.

Despite half a century of promises to bring an end to deficits, US dependency on trade deficits has only deepened as Washington has become increasingly dependent on foreign financing and sovereign debt (which now exceeds $22.2 trillion, or 106% of US GDP). The net effect is a falling trend line. 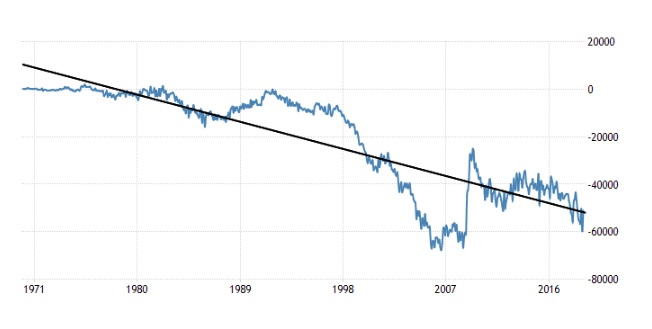 U.S. trade deficits have deepened for half a century (US$ Million)

Do the US tariff wars make economic sense? No. Here are some reasons why:

US deficit issue is multilateral and regional, not bilateral and national. Trying to resolve it by forcing the bilateral trade deficit down is a bit like mimicking the fictional story of the little Dutch boy who discovered a leak in the dyke and stuck his finger in it to save his country. That’s Trump’s strategy.

Unfortunately, it ignores the dyke’s many other leaks and may thus make the flood more likely.

Second, Trump’s trade hawks presume that international trade is a competition between companies representing different countries. They ignore the fact that, for decades—and particularly since the 1980s—national industry leaders have built multinational value activities around the world. Consequently—as even the OECD has concluded—conventional data on bilateral trade deficits can be misleading, due to multinationals’ global supply chains.

Third, it is the overall size of the trade balance that matters, and that is largely a function of macroeconomic forces, such as domestic savings and investment. If the US domestic investment continues to exceed savings, it will have to continue to import capital and will have a large trade deficit.

Since late 2017, the Trump administration has made this challenge much worse, thanks to large tax cuts, which have caused US fiscal deficits to soar. That is likely to cause the trade deficit to increase, irrespective the outcome of the trade war. Of course, one way to avoid this is that the White House will lead the US into a recession, with incomes declining adequately for investment and imports to plummet—as with the aftermath of the 2008 crisis (see the Figure).

Unfortunately, that path would further penalize American middle-class and working people, but it would also have even more severe implications internationally. It has potential to further derail global economic prospects (which would harm the very same US multinationals Trump claims to support).

As US tariff wars undermined the global recovery momentum in early 2018, the IMF now predicts that global economic activity is notably slowing. Global growth is projected to slow to 3.3% in 2019.

In the absence of more positive signals, the international environment is faltering toward a darker path.

The commentary is based on Dr. Steinbock’s recent presentation on the state of US tariff wars and global prospects.