The United States Is a Dead Man Walking 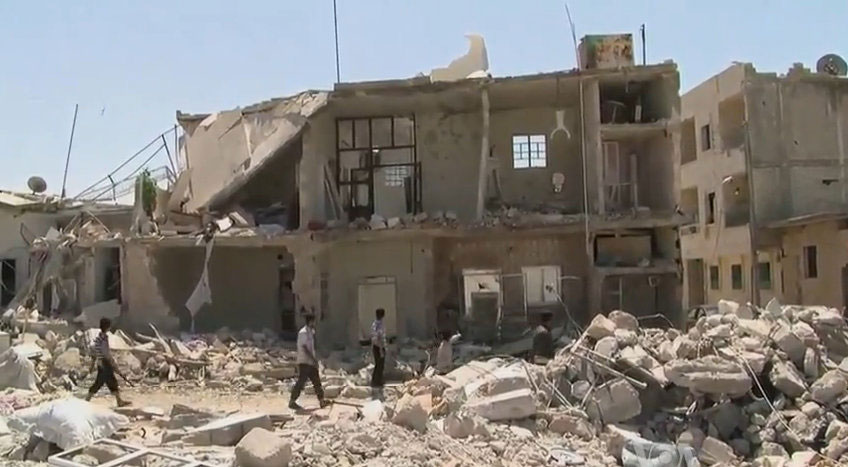 The US media is incapable of reporting the most compelling events of our time which could result in the destruction of life on earth.

While driving yesterday, I turned on the car radio to see if the Russian/Syrian liberation of Idlib, Syria, from the Washington-supported terrorist had begun. What I got was two white females deploring white racism on NPR. They were so guilty that they had indirectly benefitted from white racism. I thought I was going to drown in the guilt of one of the females before she ever finished her sentence.

You are not going to believe the “indirect benefit” that produced such wrenching guilt in the white female. But maybe you will. She had purchased a brick bungalow identical to the one next door in which a black American lived with the difference that the attic in her house had been refurbished, but the black man’s attic had not. Her racial guilt came from the fact that the white person from whom she had purchased the house had been able to refurbish the attic, but her black neighbor had not, apparently because of racism.

Does this seem like a reasonable explanation for wallowing in racial guilt? I can think of many better ones that go unmentioned in the presstitute media. For example, as Eric Zuesse reports, Saudi Arabia, the puppet state that Washington has sicced on Yemen, is “systematically blocking food from reaching tens of millions of people, Houthis, who live in Yemen and are surrounded by the U.S. alliance’s engines of death.” The Houthis are being starved to death because they wanted a government of their own, not one imposed by Washington.

One wonders at the extremely limited definition of racial guilt that the two white women on NPR found so difficult to bear: The black neighbor had a house just like hers only his attic wasn’t refurbished, a sign of racism that she felt guilty about.

How would such emotional and intellectual weaklings, as these NPR women, bear the US-enforced starvation of ten million people in Yemen currently underway, the destruction in whole or part of eight countries under the criminal Clinton, George W. Bush, and Obama regimes, now extending into the Trump regime. How could these guilt-burdened women bear the Israeli state’s systematic genocide of the Palestinians?

Of course, they don’t have to, because NPR never tells them about it. NPR is where white people go to do their self-denunciation as unworthy. This process can’t be interrupted by showing where the heavy guilt resides. If white people can’t made to feel guilty, how can blacks and Jews be safe?

The Russian government has presented documented and proven information to the United Nations that the Washington-supported terrorists in Idlib province have prepared a false-flag chemical attack to be blamed on Syria and by implication on Russia. Films are available online, prior to the announcement of an attack, of the preparatory drills that school children in Idlib are practicing for the cameras. Washington has such control over media explanations that this false-flag “Syrian chemical attack” can go forward despite the certification from the international organization that monitors chemical weapons that the Syrian government has zero chemical weapons. See, for example:

I hope readers are not so brainwashed that they are unable to see that this is a film prepared in advance of a false flag event that will be released to the presstitute media as a real event.

The American media has never done the job that the Founding Fathers gave it and protected with the First Amendment. But until the criminal Clinton regime, which permitted six monopolies to concentrate in six hands 90% of the US media, truth could sometimes get out. But no more. The US media is incapable of reporting the most compelling events of our time which could result in the destruction of life on earth. Instead, the presstitutes save their jobs by reporting fake news that serves the interests of the ruling elite.

Currently, Russia, Syria, and Iran are preparing to liberate the last Syrian province that is still in the hands of Washington’s proxy army—Al Qaeda, Al Nusra, and ISIS. Washington has sent US troops to be dispersed among the terrorists that Washington sent to overthrow Syria, thinking the American presence would deter the Russian/Syrian attack on Washington’s terrorist allies. Once again, Washington took advantage of Putin’s hesitancy to make the situation more difficult for him.

Apparently, Washington has succeeded in delaying the final liberation of Syria from US-supported terrorists. However, the Russian military, if not the Russian government, understands that at this late stage in the game, Russia cannot back down without being inundated with massive provocations as the price of its rectitude. This is why there is an armada of Russian navy off the coast of Syria armed with Russia’s new hypersonic missiles against which the US has no defense whatsoever. If it comes to a conflict, it is the Russian government’s choice alone whether any US ship will still be afloat.

The Russian military also has its newest aircraft, far superior to the American junk, armed with the hypersonic missiles. A Russian/ Washington showdown in Syria means a humiliating military defeat for Washington.

This realization makes the Russian government hesitant to use its military power in Syria. The Russian government knows that Washington is insane, that the insane neoconservatives believe in US exceptionalism and indispensability and are committed to American unilateralism. The Russians are aware that Trump, although he intended to reduce tensions, has collapsed to the onslaught from the military/security complex and would be likely to “rescue America’s honor” by pushing the button.

This, I think, could be the reason that the liberation of Idlib province has not begun. This part of Syria might be left in Washington hands as a way of avoiding the end of the world.

On the other hand, the Russian military and Russian nationalists are tired of Washington and militarily-impotent UK’s insults and provocations. They are growing impatient waiting for a defense of Russia’s honor. They understand that accepting one provocation leads to another and that eventually Russia will have to fight. Putin has been weakened by his pension changes, fostered off on him by Washington’s fifth column inside Russia—the Washington-trained neoliberal economists. It is a mystery to everyone why Putin trusts these de facto US agents who intend his and Russia’s ruin.

The other extraordinary failure of the American media is the reporting on Israel. The Israeli Zionists have been committing genocide against the Palestinians, whose country they have stolen in plain view, with no effective protest from the Great Moral Western World or anyone else, for many decades. Today the remnants of Palestine are mainly in refugee camps outside the country and in the concentration camp, the Gaza Ghetto.

As far as NPR, CNN, the NY Times, or the CIA’s Washington Post are concerned, Israel’s heavy crimes against humanity do not exist. Indeed, President Trump’s National Security Advisor, a neoconservative, recently declared that the US government would use all its power to protect every American and Israeli from accountability as war criminals before the International Criminal Court.

In other words, Trump’s National Security Advisor declared Americans and Israelis to be above the law that Washington applies to everyone else.

So, what do we have? We have the US media comfortable with the fact that Israeli crimes against humanity are not reported, because to do so would be anti-Semitic and holocaust denial.

Related article: The Role of the US Media in the Palestine Conflict

The US media has no interest in the self-interest that the military/security complex has in Russiagate, because investigating this interest would distract from the media’s commitment to get Trump impeached as a Russian agent.

The US media, indeed, the entirety of the Western media, has no interest in the dangerous conflict that the West has gratuitously orchestrated with Russia, because any such reporting would scare people to death and make them realize that the agendas promoted by the media threaten the life of the planet.

This article was originally published at PaulCraigRoberts.org on September 17, 2018.