From Trumped Equities to Gold 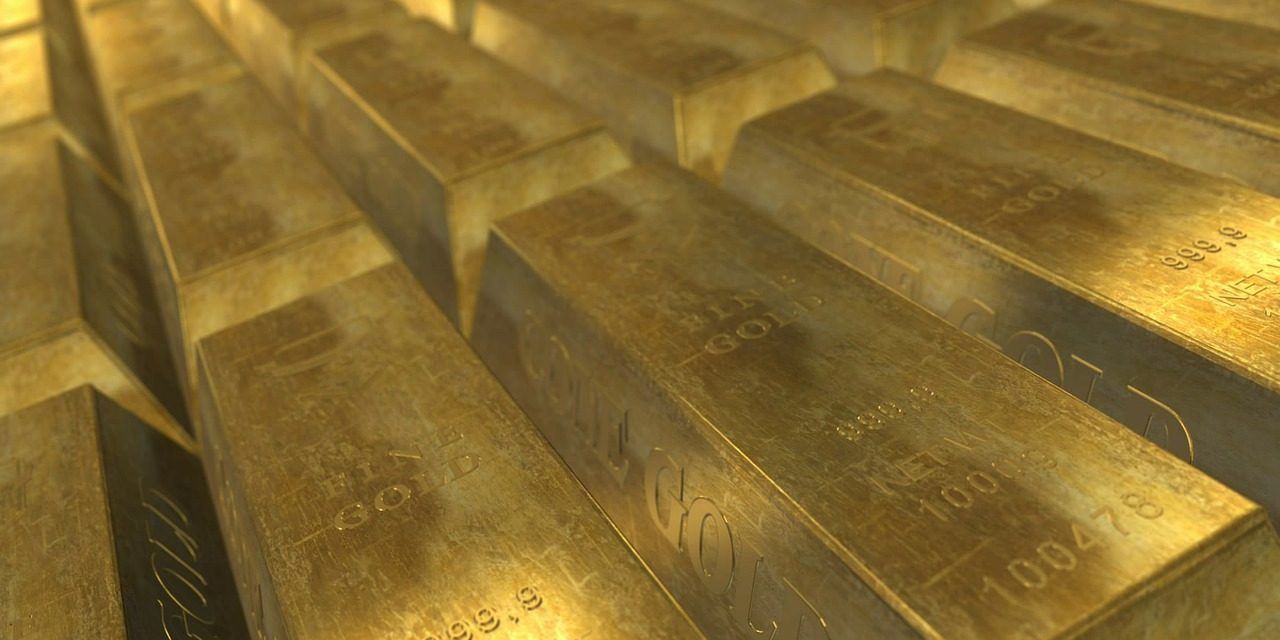 Gold is again beginning to attract investors, while Treasuries are no longer the obvious choice as central banks have turned the bond market into bubble territory.

Despite misguided economic policies and rising geopolitical tensions, the long market expansion has prevailed. But times may be changing.

With the Trump fiscal policies and rearmament, America is taking more debt than in decades, even though its sovereign debt now exceeds $21.2 trillion, or 106 percent of the GDP. As fiscal stimulus kicks in (read: Trump’s tax cuts), the deficit will widen.

The US is now the only major advanced economy that’s expected to see a rise in the debt-to-GDP ratio over the next 5 years (almost 10%!). The huge leverage relies on the continued willingness of other countries to finance America’s imbalances, even as US debt held by other countries already hovers around $6.4 trillion.

Meanwhile, the Sino-US bilateral friction continues, along with talks on the North American Free Trade Agreement (NAFTA) with Canada and Mexico, and on tariffs with the EU. In Europe, political winds are rising, despite cyclical recovery. In Germany, Chancellor Merkel’s rule is more constrained politically. Italy is heading to elections in which the old center has been played out. In France, May riots indicate Macron’s liabilities. And volatility is escalating in the post-Brexit UK.

Multiple international geopolitical flashpoints—from the new Cold War against Russia, the unilateral effort to “renew” Iran sanctions, the escalation of violence from Gaza to Syria, the nuclear talks in the Korean Peninsula, and so on—will ensure that geopolitical risks will prevail, along with bickering about the Mueller investigation and mid-term elections in the fall.

And yet, US dollar has strengthened, while Dow Jones remains over 24,200. Is the market mispricing the risks, once again?

Since the Cold War, there have been several conjecture points as investor optimism and booming markets have given way to pessimist sentiments and bear markets, as evidenced by two decades of Dow Jones and gold prices.

In the Clinton and Bush years markets boomed as investor optimism was fueled by the technology bubble, then speculation in real estate and finance until 2008. That’s when markets plunged and gold soared until it reached record highs of almost $1,900 in September 2011.

As central bankers in major advanced economies resorted to ultra-low interest rates and rounds of quantitative easing, a new market boom took off with President Trump’s arrival in late 2016 (Figure).

But does this mean that markets have a lot of potential to climb, while gold will remain subdued in the coming years? 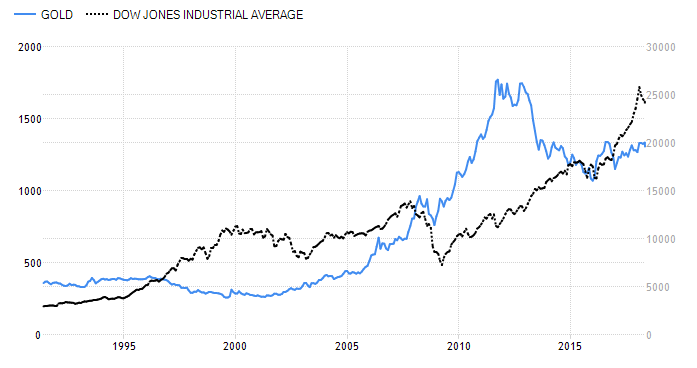 Subdued gold in the short-term

Such views seem to be supported by the World Gold Council’s first quarter data, which suggests that gold demand had a soft start, mainly because of a fall in investment demand for gold bars and gold-backed ETFs. Yet, jewelry demand was steady as growth in China and the US covered for weaker Indian demand. Moreover, central banks bought 117 ton of gold (42% increase year-on-year) and technology demand extended its upward trend.

Gold is again beginning to attract investors, especially those that build on secular trends rather than short-term fluctuations. Some believe that gold prices have broken their downtrend line, but others think that these fluctuations reflect longer-term secular trends.

In long term, secular stagnation is broadening across the major advanced economies, which cannot be disguised by monetary injections, huge leverage and overpriced markets. While the Fed is tightening, central banks in Europe and Japan continue quantitative easing and record-low interest rates. Historically, periods of low rates—or negative rates—tend to correlate with gold returns that are significantly higher than their long-term average.

With increasing global jitters, investors are seeking out traditional havens from geopolitical risks. Yet, Treasuries are no longer the obvious choice as central banks have turned the bond market into bubble territory.

Several emerging economies, which today fuel most of global growth prospects, are intrigued by the idea of re-coupling gold with a multilateral currency basket to avoid excessive exposure to US denominated energy and commodity markets. As the China-supported One Belt One Road (OBOR) initiatives advance, new arrangements are bypassing US dollar.

While advanced economies, such as the US (8,134 tons) and Germany (3,374 tons), still own most global gold reserves, they are either keeping their current levels of gold or reducing reserves. In contrast, while the large emerging economies, including Russia (1,858 tons) and China (1,843 tons), own less gold, they are increasing their gold reserves far, far faster.

In the past decade, the US has increased its gold holdings by only some 0.5 ton, while Germany has cut its reserves by almost 50 tons. In contrast, China has tripled its reserves, while Russia has nearly quintupled its gold, despite rounds of sanctions.

As some 90 percent of the physical demand for gold comes from outside the US, gold is on the right side of the future.

This article was originally published by Difference Group on May 5, 2018.