Russia in the Crosshairs 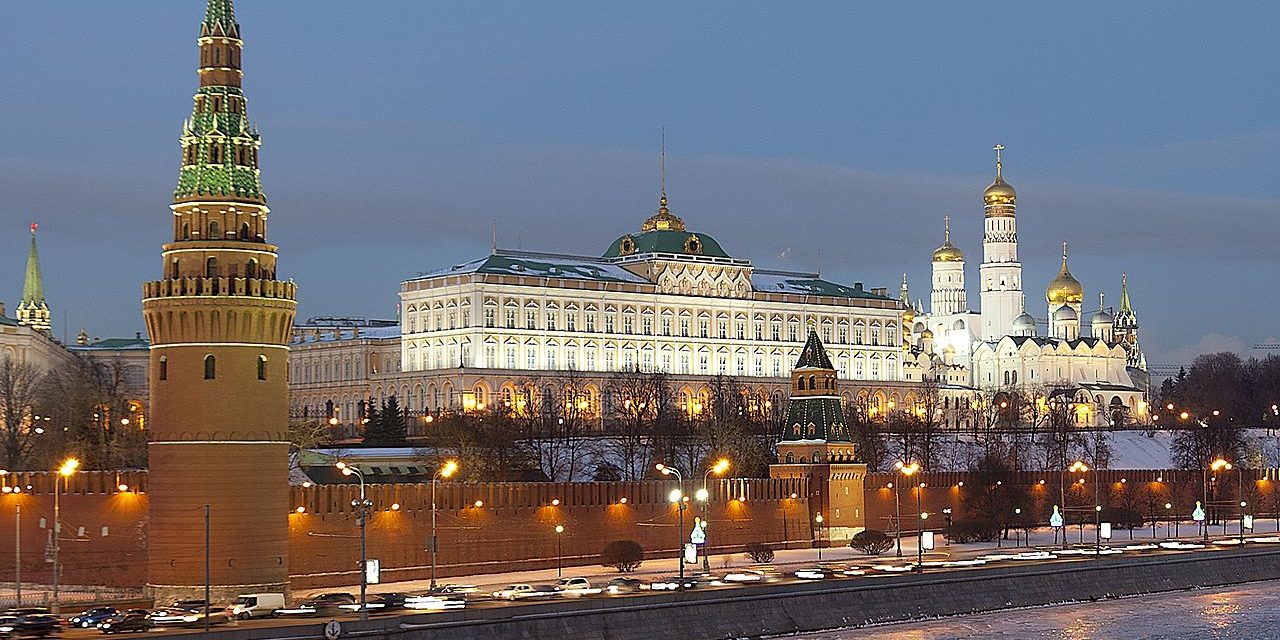 The America-worshiping Russian Atlanticist Integrationists must have many screws loose to want to be part of degenerate Western civilization.

Defending the latest round of US/Israeli aggression against Syria, US State Department spokesperson Heather Nauert struck a Hitlerian note when she blamed Syria and Iran for an act of overt Israeli aggression, saying “The United States . . . strongly supports Israel’s sovereign right to defend itself,” and when she lied that “Iran’s malign activities” and “calculated escalation of threat and its ambition to project its power and dominance places all people in the region at risk.”

Adolf Hiter covered his “projection of power and dominance” and his invasion of Poland with the same blatant lies that Washington and Israel use to cover their aggressions. Hitler claimed that Polish forces had crossed the frontier and attacked Germany. That is the excuse used by Israel and its puppets in the White House and Pentagon that blames Iran for Israel’s attack on Syria. When Washington and Israel are shameless in their lies, why does Russia think they are “partners” with whom agreements can be reached?

Eric Zuesse notes that only Syria and Russia complain about Washington’s illegal occupation of Syrian territory, an occupation that has no UN authorization and is a complete and total violation of international law, and Israel’s continual attacks on Syria.

Washington’s continuing support for war against the legitimate government of Syria and support for Israeli and terrorist attacks on Syrian and Russian forces are undermining Russia’s efforts to bring peace to the region. Zuesse also notes that Washington and its UK puppet block all UN action against Washington’s illegality.

Zuesse is correct. But is the continuation of Washington’s campaign against Syria and Russia largely the fault of Russia? Stephen Lendman makes a case that it is Russia’s fault.

Why? It appears to be the case that the Russian government is so anxious for Western approval that it ends its successful military campaigns before the job is finished. It was Putin himself who declared “victory” in Syria and withdrew some of the Russian military before clearing all of Syria of foreign and jihadist occupation, thus leaving in place US beachheads for renewing the conflict.

It couldn’t have taken more than two more weeks for Russia and Syria to liberate all of Syria from the US backed jihadists, but apparently Russia was afraid to annoy Washington that much and to risk contact with US personnel, even though Russia is in Syria legally under international law and the US is present illegally.

Again trusting to international law, the UN, and “our Western partners,” Russia quit prematurely. As Lendman says, the complaints by Zakharova, Lavrov, Russian Defense Ministry spokesmen, and Putin himself are based in absolute fact. But the question is, when will Russia learn, if ever, that facts and law make no difference whatsoever to Washington? Washington’s interest is in its hegemony over the world and in Israel’s hegemony in the Middle East.

Lendman makes the point that “As long as Russia maintains the myth of partnership with Washington instead of giving Washington a taste of its own medicine . . . conflict will likely continue escalating.”

Lendman might be correct judging by the reported heavy Israeli attacks on Syria on February 10 after Syrian air defenses damaged Israel’s image of invincibility by shooting down one of Israel’s US-supplied war planes that was attacking Syria and reports that the conflict might be escalating and involving Iran. RT reports that the Kremlin is worried that the de-escalation zones are threatened and that Putin got on the telephone with Netanyahu urging restraint.

All of my life US presidents have been urging restraint on Israel to no effect whatsoever. Putin’s urges will have no more effect, unless Putin takes the card from Lendman’s playbook and tells the war criminal Netanyahu who heads the illegal Israeli state, which is based on land stolen at bayonet point from Palestinians, that any more of this and Russia will take Israel out. Lendman thinks that no other way of talking to the crazed Zionist state, or to Washington, will have any effect, and history seems to be on Lendman’s side. (See here and here.)

Either Russia is unsure of its power or Putin is prevented from using Russia’s power by the treasonous Atlanticist Integrationists who constitute Washington’s Fifth Column inside the Russian government and economy. It is a mystery why Putin tolerates a small handful of traitors who have minimal public support while the West and Israel become daily more aggressive against Russian national interests.

Putin sensibly avoids escalating a situation, but one gets the impression that there are constraints on Putin’s ability to stand up to Washington. The Saker identifies the problem as the pro-Washington “Atlanticist Integrationists” who for personal career reasons, personal business reasons, and because they are supported by Washington-financed NGOs and media inside Russia, have sold out Russian sovereignty to globalism. Putin, apparently, is unwilling or unable to move aside those who serve as Washington’s check on Russian nationalism, which prevents any real Russian victory.

If the “Atlanticist Integrationists” inside Putin’s government are able to block more decisive responses, the question arises: how powerful, really, is Putin? Did Putin win Syria only to lose it to Washington and the Israelis? How can we imagine Putin, the head of a powerful state, on the telephone pleading with an Israeli war criminal who heads a tiny state? We know that Israel owns Washington, but does Israel own Russia also?

How many times did Putin announce victory in Syria, pull out, and then have to go back after Washington’s forces had recuperated? Why does Putin refuse the reincorporation of the breakaway Russian provinces in Ukraine? He allowed Crimea back in because of the Russian naval base, but he has refused the Russian provinces of Donetsk and Luhansk. Consequently, the Russian people in these provinces continue to be subject to attack, and Washington has now armed its Ukrainian Nazi state with weapons to reconquer the breakaway republics.

This entire conflict, primed to grow in intensity, could have been stopped by Putin acknowledging the same overwhelming majority vote as occurred in Crimea and reincorporating the provinces in Russia. The Nazi government of Ukraine even with Washington and EU’s support is not so completely insane that it would attack Russia and expect to continue to exist.

Putin can entirely end the Ukrainian conflict by accepting the former Russian provinces back into Russia. We can understand that Putin might be thinking long term, as were the Soviet leaders who put Russian populations into Ukraine, to balance the Ukrainian state with Russian populations so that the West cannot completely turn Ukraine, a historic part of Russia herself, into a completely hostile state against which more military forces must be directed. Clearly Putin is a long term strategic thinker, but Russia’s fate and that of the rest of us will be decided in the short run.

We can also understand that Putin, by continuing to stress international law, is trying to bring Europe to the realization that Washington operates outside of and above law. Putin is wasting his time. For decades European leaders have been on Washington’s payroll. They don’t give a hoot about anything other than their bank balances.

The neoconservatives who rule in Washington believe that Putin’s removal will restore Washington’s hegemony over the world. They regard China as a country that will accept American leadership in exchange for riches. This is most likely a mistaken view of the Chinese government, but it serves to concentrate the attack on Russia, within whose government Washington has allies.

Can the Russian government successfully withstand Washington without Putin dispensing with the Atlanticist Integrationists?

I understand that the views expressed here might be wrong. Zuesse perhaps is wrong. Lendman is perhaps wrong. The Saker is perhaps wrong. And perhaps I am mistaken in my reading of them. No one should underestimate Putin. Nevertheless, Russia should be aware that she is perceived by neoconservative policymakers as a weak state lacking in courage that Washington, and even tiny Israel, can push around, as Washington has done since the collapse of the Soviet Union and as Israel is doing now in Syria. There is never any cost to Washington of blackening Russia’s eyes and Russia’s reputation.

Whether or not Russia wants to acknowledge it, Russia is in a fight for her life. There is evidence that top Russian leaders are unaware of this. Sergei Chemezov says that Russia is willing to sell Russia’s S-400 anti-aircraft system to Washington so Washington can learn how to defeat it and catch up with Russian military technology. Unless Chemezov is making a joke, there is a problem in his perception of reality.

Putin damaged himself with people who have a moral conscience when he met with the criminal-in-chief of the Israeli state and treated Netanyahu as if he were not a war criminal who belonged on the scaffold but a world leader worthy of Russia’s recognition. This act of folly deflated Putin’s reputation as a leader who stood for moral outcomes and not merely for self-interested, negotiated outcomes.

The world needs a leader. The hopes were on Putin.

The America-worshiping Russian Atlanticist Integrationists must have many screws loose to want to be part of degenerate Western civilization (see, e.g., here, here, here, and here.)­

This article was originally published at PaulCraigRoberts.org on February 11, 2018.