Jerusalem Is (Is Not) the Capital of Israel 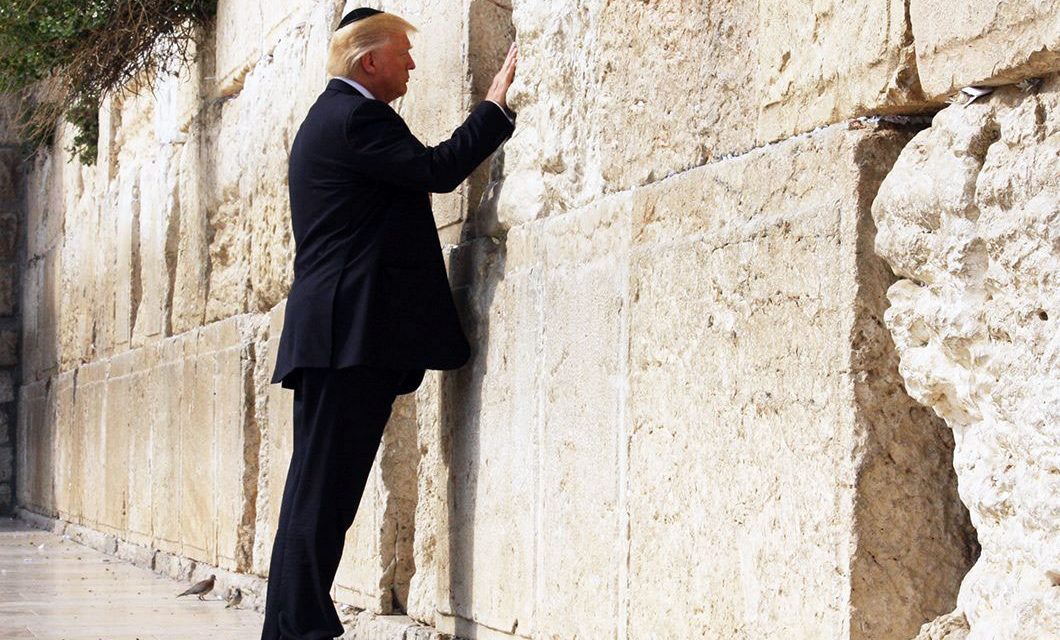 Donald Trump has rejected international law with his statement on the status of Jerusalem, and in doing so effectively ended the so-called "peace process".

Those who speak on behalf of Israel like to defend Donald Trump’s provocative decision of December 6th to recognize Jerusalem as the capital of Israel with this contention: “Israel is the only state in the world that is not allowed to locate its capital in a national city of its choice.” It seems like an innocent enough proclamation, and even accurate pushback against global double standards, until one considers the political, moral, and legal dimensions of the actual situation.

With the benefit of just a moment’s reflection, a more thoughtful formulation of the issue would be: “Israel is the only state in the world whose government dares to locate its capital in a city located beyond its sovereign borders and subject to superior competing claims.” Granted, Israel has declined to date to define its borders for purposes of international law, presumably to leave room for its own further territorial expansion until the whole of the “promised land” as understood to comprise biblical Israel is effectively made subject to Israeli sovereign control. At stake, in particular, is the West Bank, which is known within Israel by its biblical names of Judea and Samaria, signifying Israel’s outlier belief that the ethnic and religious heritage of the Jewish people takes precedence over modern international law.

Further reflection casts additional doubt on this Trump/Netanyahu approach to the status of Jerusalem. It is helpful to go back at least 70 years to the controversial UN partition proposals set forth in General Assembly Resolution 181. Israel over the years has often congratulated itself on its acceptance of 181, which it contrasts with the Palestinian rejection. Palestinians suffered massive dispossession and expulsion in the war that ensued in 1947, known as the Nakba among Palestinians. Israel has argued over the years that its acceptance of 181 overrides the grievances attributable to the Nakba, including the denial to Palestinians of any right to return to their homes or place of habitation however deep and authentic their connections with the land and regardless of how persuasive their claims of Palestinian identity happen to be. What Israelis want the world to forget in the present setting is the UN treatment of Jerusalem that was integral to the 181 approach. Instead, Israel has sold the false story to the world that 181 was exclusively about the division of territory, and thus the bits about Jerusalem contained in the resolution can be ignored without comment, and deserve to be long forgotten.

What the UN actually proposed in Resolution 181, and what Israel ‘accepted’ in 1947, was that the city of Jerusalem, in deference to its connections with Palestinians and Jewish national identity, should not be under the sovereign control of either people, but internationalized and subject to UN administration. Beyond the difficulty of reconciling Jewish and Palestinian claims to the city, the symbolic and religious significance of Jerusalem to the three monotheistic religions provided a parallel strong rationale for internationalization that has, if anything, further vindicated with the passage of time.

It can be argued by proponents of Trump’s recognition that even the Palestinians and the Arab World (by virtue of the 2002 Arab Peace Initiative) have silently replaced the internationalization of Jerusalem with the so-called ‘two-state solution’ in which the common assumption of both sides is that Jerusalem would be shared in ways that allowed both Israel and Palestine to establish their respective capital within the city limits. Most two-state plans called for the Palestinian capital to be located in East Jerusalem, which Israel has occupied for the past 50 years, that is, ever since the 1967 War. The clarity of this conviction is what explains the view that the thorny question of the relationship of both Israel and Palestine to the disposition of Jerusalem should be addressed at the last stage of peace negotiations. But suppose that the prospect of genuine peace negotiations is postponed indefinitely, then what? The geopolitical effort to fill this vacuum is undertaken at the expense of UN authority, as well as international law and international morality.

Here again we encounter an awkward split between what Israel claims (as reinforced by U.S. foreign policy) and what international law allows. Israel after the war ended in 1967 immediately asserted that the whole of Jerusalem was ‘the eternal capital’ of the Jewish people. Tel Aviv went even further. It expanded by Israeli legal decree the area encompassed by the city of Jerusalem, almost doubling its size and incorporating a series of Palestinian communities in the process. Israel acted unilaterally and unlawfully, against unified opposition within the UN, in defiance of world public opinion, and even in the face of rebuke by such a widely respected moral authority figure as Pope Francis.

East Jerusalem, at least, is ‘Occupied Territory’ according to international humanitarian law, and as such is subject to the Geneva Conventions. The Fourth Geneva Convention governs ‘belligerent occupation,’ and rests on the basic legal norm that an Occupying Power should take no steps, other than those justified by imperative security considerations, to diminish the rights and prospects of a civilian population living under occupation. In this regard, it is hardly surprising that Israel’s actions designed to obliterate East Jerusalem as a distinct ‘occupied’ territory have met with universal legal and political condemnation within the UN. For Trump to depart from this international consensus is not only striking heavy blows against the U.S. role as intermediary in any future peace process, but also mindlessly scrapping the two-state approach as the agreed basis of peace without offering an alternative, leaving the impression that whatever reality Israel imposes the United States will accept, giving scant attention to international concerns or Palestinian rights.

Returning to the burning question as to why Israel should be denied the right to locate its capital wherever it wishes, as other states do, it is clarifying to reformulate the Israeli claim: “Does any state have the right to establish its capital in a city that is ‘occupied’ rather than under the exclusive sovereign authority of the territorial government?” This is especially relevant in this instance, given the general agreement within the international community that the Palestinian right of self-determination includes the right to have its national capital both within its territory and in Jerusalem.

Trump’s initiative tries to ease the pain by the confusing accompanying assertion that the final disposition of Jerusalem’s borders is something for the parties to decide as part of final status negotiations, that is, at the end of the diplomatic endgame. Aside from Israel’s belief that it need not make further concessions for the sake of peace, a geopolitical assertion of support for Israel’s approach to Jerusalem, especially without the backing of the Arab League, the UN, and the European Union is worse than an empty gesture. It uses an iron fist on behalf of the stronger party, where a minimal respect for law, morality, and justice would counsel giving support for the well-grounded claims of the weaker side, or at least staying neutral.

The harm done by the Trump initiative on recognizing Jerusalem as the capital of Israel, and declared intention to start the process of moving the embassy is impossible to assess fully at this time. Whether there will be an upsurge in resistance violence, political extremism, anti-American terrorism, and wider warfare is now essentially unknowable, although the stage has been recklessly arranged so that these developments seem more likely to occur than earlier, and if they do, will be treated as outcomes of Trump’s faulty diplomacy.

What is already evident on the basis of the decision itself is the severe damage done to the global and regional leadership reputation of the United States. As well, the authority of the United Nations has been shown to be no match for geopolitical resolve, and international law and world public opinion have been pushed aside. For the Trump presidency the special relationship with Israel has been enlarged beyond previous outer limits and the part of the Trump base that wanted these policies has been appeased for the moment. Prospects for a diplomacy based on the equality of rights of Palestinians and Israelis have been reduced to zero, and thus no just end of the Palestinian ordeal can be foreseen. Overall, it is not a pleasant balance sheet of gains and losses if evaluated from the perspective of American grand strategy in the Middle East, and if the wider regional setting of Iran’s spreading influence is taken into account, the situation looks even worse.

This article was originally published at RichardFalk.WordPress.com on December 10, 2017, and is a slightly modified version of an article published in the global edition of the Italian newspaper, Il Manifesto, on December 8, 2017.