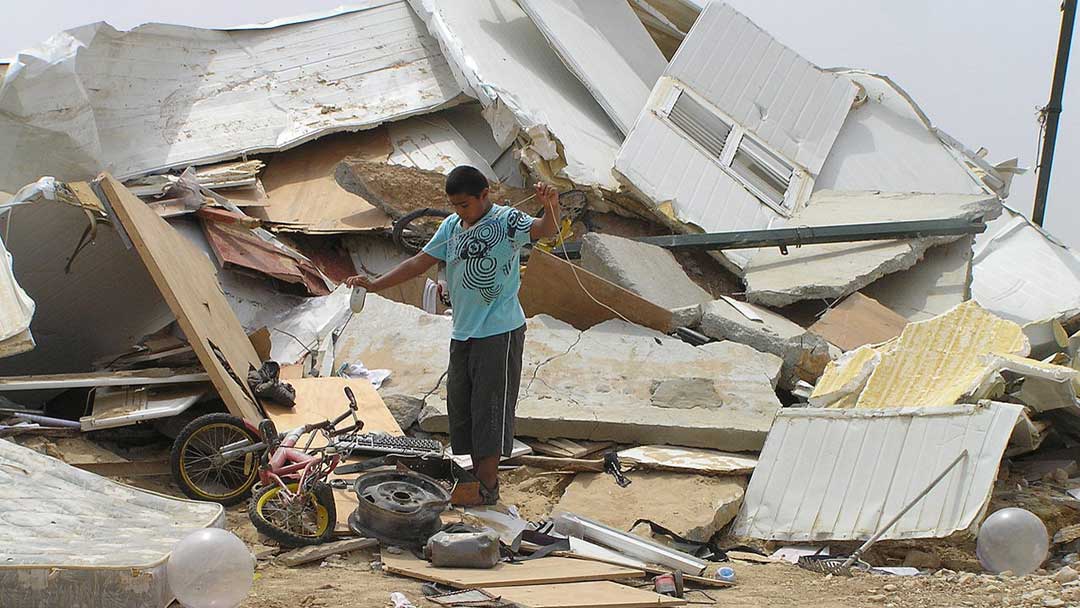 A demolished home in the Bedouin village of Al-Araqeeb, July 31, 2010 (Emanuel Yellin/Public Domain)

Israel has destroyed the Palestinian Bedouin village of Al-Araqeeb 116 times. Each time the Bedouins rebuilt the home, which predates Israel.

On August 1, the Palestinian Bedouin village of Al-Araqeeb was destroyed for the 116th time. As soon as Israeli bulldozers finished their ugly deed and soldiers began evacuating the premises, the village resident immediately began rebuilding their homes.

Twenty-two families, or about 101 residents, are estimated to live here. By now, they are all familiar with the painful routine, considering the first round of destruction took place in July 2010.

It means that the village has been destroyed nearly 17 times per year, since then. And every single time, it was rebuilt, only to be destroyed again.

If the repeated destruction of the village is an indication of Israel’s stubborn insistence to uproot Palestine’s Bedouins, the rebuilding is indicative of the tenacity of the Bedouin community in Palestine.

But Al-Araqeeb is only symbolic of that historic fight.

It would be no exaggeration to state that there is a war waged by Israel against Palestinian Bedouins. The aim is to destroy their culture and to force them into townships similar to those of Apartheid South Africa.

The geographic space of that war extends from the Negev desert to the Southern Hebron Hills to Jerusalem.

The epicenter of the ongoing fight is the village of Al-Araqeeb. Not only has Israel destroyed Al-Araqeeb numerous times in violation of international law, it actually delivers a bill to the homeless residents expecting them to cover the cost of the very ruins wrought by the Israeli state.

According to latest estimates, the families that live in makeshift huts and rely on rudimentary means to survive, are expected to pay up a bill of 2 million shekels, around $600,000.

Israel dubs Al-Araqeeb, along with 35 villages in the Negev, as ‘unrecognized’ by the Israeli government’s master plan, thus they must be erased, and their population driven into townships made for the Bedouins.

However, these villages are older than Israel itself, and any such ‘master plan’ could have easily considered this existing reality. However, what Israeli truly labors to achieve is to replace the Bedouins with its own Jewish population, as it has tirelessly done for seven decades.

Palestinian Bedouins are known for their tenacity. They fully fathom the history and plight of their ancestors, where generation after generation were ethnically cleansed and exiled to refugee camps outside Palestine, or forcibly removed to other areas. Today’s Bedouin communities refuse to be subjected to that same fate again.

The Israeli plan to ethnically cleanse the Bedouins of the Negev is no different from the plan to colonize the West Bank, Judaize the Galilee and Palestinian East Jerusalem. All such efforts always culminate in the same routine—of removing the Arabs and replacing them with Israeli Jews.

In 1965, Israel passed the Planning and Building Law which recognized some Palestinian Arab villages in the Galilee and southern Negev, but excluded others. Nearly 100,000 Bedouin were forcibly removed to ‘Planned Townships’ to endure economic neglect and poverty. Many refused to be moved and, since then, have fought a protracted war to survive and maintain a semblance of their culture and way of life.

Currently, according to the Institute of Palestine Studies (IPS), roughly 130,000 individuals live in the so-called unrecognized villages “under the constant threat of wholesale demolition.”

The anomaly is that these Bedouin communities prove the fallacy of the Israeli claim that it was Jewish settlers—not Palestinians—that ‘made the desert bloom.’

A simple look at statistics demolishes that deceptive claim entirely.

As of 1935—that is 13 years prior to the existence of Israel—Bedouins “cultivated 2,109,234 dunums of land where they grew most of Palestine’s barley and much of the country’s wheat,” stated IPS.

Moreover, Jewish settlers did not arrive in the Negev till 1940 and, by 1946, the total Jewish population there did not amount to more than 475.

“The amount of land cultivated by the Bedouins in the Negev prior to 1948 came to three times that cultivated by the entire Jewish community in all of Palestine even after sixty years of ‘pioneering’ Zionist settlement,” IPS concluded.

To reverse this indisputable historical reality, Israel has led a decided campaign aimed at vanquishing the Bedouins by severing their relationship to their land. Although this has been done with a great degree of success, the struggle is not yet over.

The same struggle is duplicated elsewhere, especially in so-called ‘Area C’ encompassing 60 percent of the West Bank. Palestinian Bedouin villages there are also enduring a terrible fight, as many of their villages have been singled out for destruction.

Most of West Bank Bedouins live in the central West Bank region, in an area known as the South Hebron Hills. Last month, it was reported that the Israeli Supreme Court is now “deciding the fate” of the Bedouin village of Dkeika. Other villages in the area have either been demolished, received demolition orders or are waiting for their fate to be determined by the Israel court.

It is hardly a question of a single village or two. The UN reported that 46 villages in central West Bank are “at risk of forcible transfer” by the Israeli government.

To preclude any legal wrangling, the Israeli government has been actively pursuing wholesale, irreversible actions to seal the fate of Bedouins once and for all.

In 2013, Israel announced the “Prawer Plan”, the goal of which was the destruction of all unrecognized villages in the Negev. However, massive mobilization involving the Bedouins and Palestinians throughout the Occupied Territories defeated the plan, which was officially rescinded in December of the same year.

But, now, it is being revived under the name ‘Prawer II.’ A draft of the plan, which was leaked to local media, was introduced by Israel’s Agricultural Minister, Uri Ariel. It, too, aims to “deny Bedouin citizens land ownership rights and violate their constitutional protections,” reported Patrick Strickland.

The war on the Bedouin is, of course, part of the larger war on all Palestinians, whether in Israel or under military occupation. While the latter are denied the most basic freedoms, the former are governed by at least 50 discriminatory laws, according to the Haifa-based Adalah Legal Centre for Arab Minority Rights.

Many of these laws are aimed at depriving Palestinians of the right to own land or to claim even the very land upon which their homes and villages existed for tens and hundreds of years.

It should come as no shock, then, to learn that, while Palestinian citizens of Israel are estimated at 20 percent of the population, they live on merely 3 percent of the land, and many of them face the constant danger of being evicted and relocated elsewhere.

The story of Al-Araqeeb is witness to the never-ending Israeli desire for colonial expansion at the expense of the indigenous population of Palestine, but also of the courage and refusal to give in to fear and despair as demonstrated by the 22 families of this brave village.

In some way, Al-Araqeeb represents the story of all of Palestine and its people.

The struggle of Al-Araqeeb should evoke outrage at Israel’s constant violation of human rights and its refusal to recognize the national aspirations of the Palestinian people, but it should also induce hope that 70 years of colonial expansion cannot defeat or even weaken the will of a village, of a nation.