The Assault on Trump 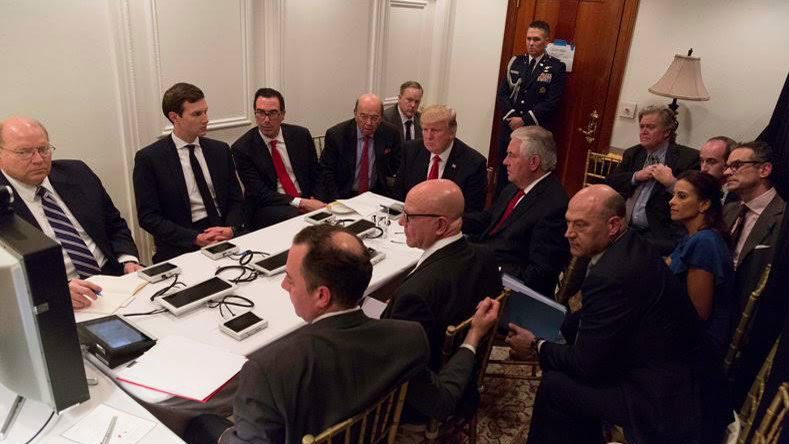 The American media is so accustomed to its enslavement by the national security state that it does not think of the consequences.

We are witnessing an assault by the national security state and its liberal media on a President of the United States that is unprecedented.

Wild and unsupported accusations of treasonous or illegal Russian connections have been the mainstay of the news since Trump’s campaign for president.

These accusations have reached the point that there is an impeachment movement driven by the national security state and its liberal media and endorsed by Democrats, the American leftwing which has turned against the working class as “Trump deplorables,” and luminaries such as Harvard Law Professor Larry Tribe.

The Washington Post, which was not present at the meeting of President Trump with Russian Foreign Minister Lavrov, purports to know that Trump gave Lavrov US national security information.

The Russian government has offered the presstitute media a transcript of the meeting, but, of course, the pressitutes are not interested.

The latest story is that Trump tried to bribe FBI Director Comey, before he fired him, not to investigate Trump as part of the “Russian investigation.” Clearly there is no intelligence left in the American media. The President doesn’t need to bribe someone he can fire.

What we are witnessing is the determination of the national security state to keep their prized “Russian Threat” in its assigned role as the Number One Threat to the US. The liberal media, owned by the CIA since the 1950s is in accord with this goal.

The American media is so accustomed to its enslavement by the national security state that it does not think of the consequences.

But Professor Stephen Cohen does. I agree with him that the greatest threat to national security “is this assault on President Trump.”

Cohen said that there is a 4th branch of government, the intelligence community, which obstructs the management of American foreign affairs by the executive branch and Congress.

As an example, he reminded us that “In 2016, President Obama worked out a deal with Russian President Putin for military cooperation in Syria. He said he was going to share intelligence with Russia, just like Trump and the Russians were supposed to do the other day. Our department of defense said it wouldn’t share intelligence. And a few days later, they killed Syrian soldiers, violating the agreement, and that was the end of that. So, we can ask, who is making our foreign policy in Washington today?”

In the 1960s, President John F. Kennedy thought he was in charge, and he was assassinated for his belief. JFK blocked an invasion of Cuba, the Northwoods project, a preemptive nuclear strike on the Soviet Union, and spoke of ending the Cold War.

In the 1970s, President Nixon was driven from office, because he thought he was in charge of foreign policy. Like Kennedy, Nixon was a threat to the national security state. Nixon pushed through SALT 1 and the anti-ABM Treaty, and he opened to China, defusing those tensions as well. The military/security complex saw its budget dwindling as the threat dwindled. Nixon also determined to withdraw from Vietnam, but was constrained by the national security state. Nixon, the most knowledgeable president about foreign affairs, was forced from office, because his efforts on behalf of peace constituted a threat to the power and profit of the military/security complex.

It is important to understand that there is no evidence whatsoever against Nixon in the Washington Post “investigation.” The Post’s reporters simply put together a collection of innuendoes that cast aspersion on Nixon, whose “crime” was to say that he learned of the Watergate burglary at a later date than he actually did. Nixon kept the burglary quiet until after his reelection, because he knew that the CIA’s Washington Post would use it in an effort to prevent his reelection.

The “crime” for which Nixon was really removed was his success in establishing more peaceful and stable relations with Russia and China.

Trump, being in real estate and entertainment, was unaware of the landmines on which he was stepping when he said it was time to normalize relations with Russia and to rethink the purpose of NATO.

The US military/security complex sits on a budget extracted from very hard-pressed American taxpayers of $1,000 billion dollars annually. By threatening to normalize relations with the enemy which was created in order to justify this vast budget, Trump presented as the major threat to the American National Security State’s power and profit.

This is why Trump will be broken and/or removed as President of the United States.

Once again democracy in American is proving to be powerless. There is no one in Washington who can help Trump. Those who could help him, such as myself, cannot be confirmed by the US Senate, which is owned lock, stock, and barrel by the military/security complex, Wall Street, and the Israel Lobby.

Trump tried to connect the suffering American people to their government, an act of treason against the oligarchy, who are making an example of Trump that will dissuade politicians in the future from making populist appeals to the people.