Trump-China Trade and the Impact on US Small Business 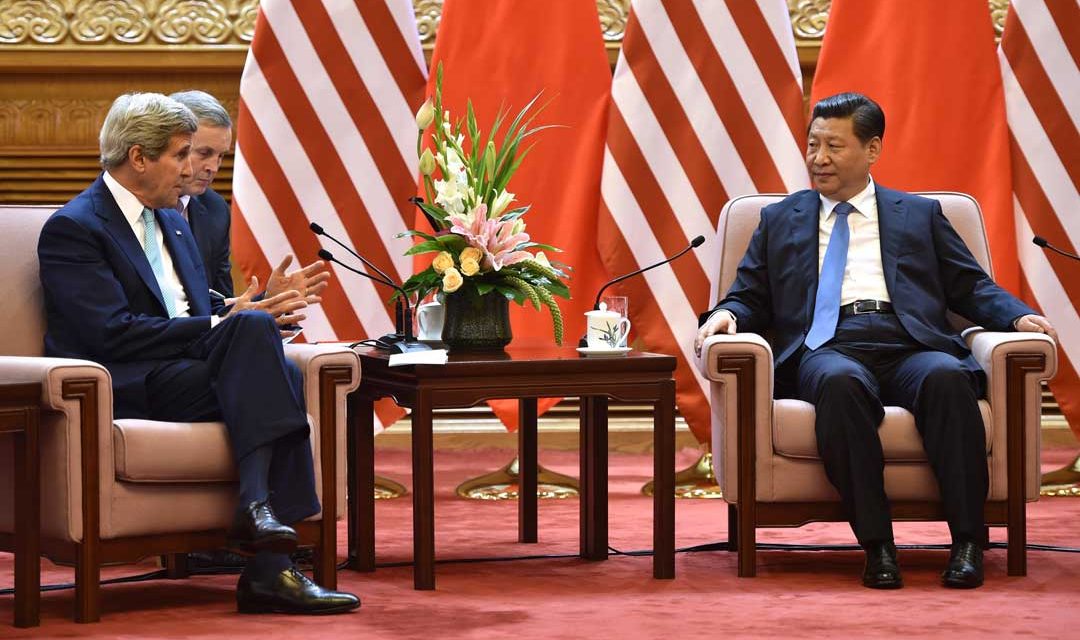 U.S. Secretary of State John Kerry speaks with Chinese President Xi Jinping to discuss the conclusion of the 5th Annual U.S.-China People-to-People Exchange and Sixth Strategic and Economic Dialogue between the two nations on July 10, 2014. (US State Department)

The actions of the president and the reactions of US overseas trading partners may create opportunities or problems for American entrepreneurs.

President-elect Donald Trump has portrayed his administration as pro-US-business and pro-US-economy. He seems to have a particular issue with China, which he blames for many of the woes of the US economy, including stealing US jobs and US manufacturing. He likes using the word “deal” and in order to make a better deal for US domestic businesses he has vowed to levy a 45% tariff on Chinese imports, raise a 35% tax on US manufacturers who export jobs overseas, and to withdraw from many international trade agreements, most notably the Transpacific Partnership (TPP) and the North American Free Trade Agreement (NAFTA). The rationale which the president-elect has given for withdrawing from these agreements is that he feels they have been unfair for American companies.

While small business owners in the US may find these global political/economic issues interesting, the question that effects the quantity and quality of bread he or she can put on the table for their family is, “How does this effect my small business?”

Large-scale international trade deals matter to small businesses because small businesses are the backbone of the US economy. The Small Business Association reported in 2012 that over 99% of US companies were small to medium sized businesses with 500 or less employees. Fortune Magazine stated that US small to medium sized businesses created “two-thirds of net new private sector jobs in recent decades.” According to a U.S. Census Bureau 2015 report, US small- and medium-sized companies accounted for more than 40% of the US non-farm, private sector GDP and 94.4% of total imports and exports, by volume.

It is no secret that the US runs a trade deficit with China. One way of making up this deficit would be by increasing US exports to China. By increasing the export of their goods and services, US small businesses could expand their potential customer base. Trade agreements can help open those export opportunities to Americans. The Transpacific Partnership, for example, would give US companies access to a market of 819 million people, who account for 25.9% of world trade. The TPP also contains sections which specifically address e-commerce, which is important for small businesses in the US.

The problem which trade agreements present for US small businesses, however, is that bigger businesses, which can outsource their production overseas, will have a price advantage. Companies that manufacture oversees save a lot of money in salaries. Business Insider reports that Mexican workers earn $4.25 per day. Vietnamese workers earn around $145 a month. And in China they earn less than $6,000 per year. Payscale.com found that the average wage for manufacturing labor in the US is $12.22, which makes it hard for US based companies to compete.

President-elect Trump is not the first person to notice the obvious problems with current trade agreements. Fortune Magazine stated that in most of the world’s countries, US exports are taxed higher, in fact double, the tariffs charged by the US on imports from those countries. In the 11 other TPP countries, US exports are charged as much as a 20% tariff. President Obama also must have seen this situation as unfair because he threatened to levy a 35-45% tariff on the importation of auto parts Ford Motors manufactured in Mexico.

In the case of China, the president-elect has cited two significant points which make Chinese products cheaper; lower wages and a lower currency. China is the world’s second largest economy and a rising economic superpower and yet the average Chinese citizen earns less than the average citizen of Gabon, and only earns less than half of the average person in Greece. In fact, Lily Kuo, reporting for Quartz magazine, found that a cleaner in Thailand earns more than a factory worker in China. As for the currency being too cheap, in simple terms, the Yuan is pegged to the dollar and is allowed to fluctuate within a narrow band. If the value of the Yuan rises or drops by too much, the Chinese government goes on the open market, purchasing or selling US currency to bring the price of the Yuan back in line with the central government’s plans. As recently as August, 2016, the People’s Bank of China (PBOC) devalued the Yuan by 3% against the US dollar. Matthew Johnson, writing for Investopedia, believed the motivation for this action was to support the slowing Chinese economy by keeping Chinese exports cheap.

If China would unpeg the Yuan from the Dollar and allow the Yuan to rise, this would decrease the price advantage of Chinese products, making US products more attractive. Or if China would increase wages, and with them the standard of living of workers, the same effect would be achieved. With the TPP and other international trade agreements, if the US could negotiate a reciprocal tariff arrangement US products could become more competitive in both foreign and domestic markets. Any of the above situations could potentially be good for small businesses.

Many economists warn that if Donald Trump levies a 45% tariff against Chinese products then a trade war may ensue. Regardless of whether a trade war results or not, increasing tariffs on imports will increase the price of goods in the US. Therefore, small businesses can expect to pay more for the raw materials and components they need to run their businesses. However, the higher prices of Chinese imports will help to increase sales for domestic companies. On the other hand, if increased tariffs and taxes bring some American companies home again, this will create opportunities for local small businesses to sell goods and services to these newly repatriated companies.

International trade deals matter to US small businesses. The actions of the president and the reactions of US overseas trading partners may create opportunities or problems for American entrepreneurs. Staying informed, thinking outside the box, and looking for the opportunities these new trade arrangements afford small business may be the best strategy for business owners.

Kuo, L. 2014, The average Chinese private-sector worker earns about the same as a cleaner in Thailand: http://qz.com/170363/the-average-chinese-private-sector-worker-earns-about-the-same-as-a-cleaner-in-thailand/